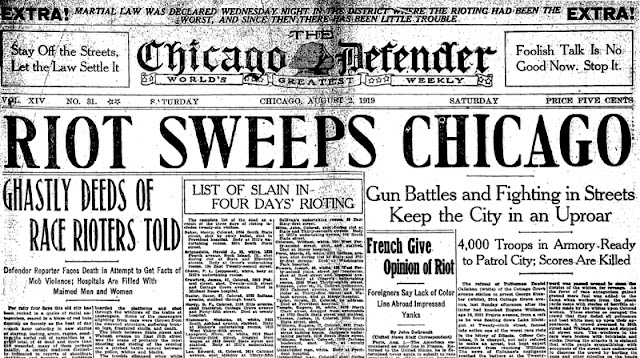 The Chicago race riot of 1919 was a major racial conflict that began in Chicago, Illinois, on July 27th, 1919, and ended on August 3rd. During the riot, thirty-eight people died (23 Negro and 15 White), and over five hundred were injured. It is considered the worst of the approximately 25 riots during the Red Summer, so named because of the nationwide violence and fatalities. The combination of prolonged arson, looting, and murder made it the worst race riot in the history of Illinois.

According to official reports, the Chicago riots began after Eugene Williams, a Negro teenager, drowned in Lake Michigan after being struck in the head by a rock thrown by a white man angry that Williams and friends had drifted into the "white side" of the informally segregated beach.
Responding police refused to arrest the white man who was identified as having thrown the rock and instead arrested a Negro man at the scene. When Negro onlookers complained, they were met with violence, and widespread rioting between Negro and white Chicagoans soon spread throughout the city's Negro residential areas. Tensions between groups arose in a melee that blew up into days of unrest.


The sociopolitical atmosphere of Chicago was one of the ethnic tension caused by competition among many new groups. During the Great Migration, thousands of Negroes from the South had settled next to neighborhoods of European immigrants on Chicago's South Side, near the stockyards and meatpacking plants. With industrial jobs in the stockyards and meatpacking industry opening as European immigration was cut off by World War I, from 1916 to 1919, the Negro population in Chicago increased from 44,000 to 109,000, a 148 percent increase during the decade.
The Irish had been established first and fiercely defended their territory and political power against all newcomers. Post-World War I tensions caused friction between the races, especially in the competitive labor and housing markets. Overcrowding and increased Negro militancy by veterans contributed to the visible racial clashes. Also, a combination of ethnic gangs and police neglect strained racial relationships.
William Hale Thompson was the Mayor of Chicago during the riot, and a game of brinksmanship with Illinois Governor Frank Lowden may have exacerbated the riot since Thompson refused to ask Lowden to send in the National Guard for four days, despite Lowden ensuring that the guardsmen were in Chicago and ready to intervene.
Although future mayor Richard J. Daley never officially acknowledged being part of the violence, at age 17, he was an active member of the Irish Hamburg Athletic Club, which a post-riot investigation named as an instigator in attacks on Negroes. In the following decades, Daley continued to rise in politics to become the city's mayor for twenty-one years.
United States President Woodrow Wilson and the United States Congress attempted to promote legislation and organizations to decrease racial discord in America. Illinois Governor Frank Lowden took several actions at Thompson's request to quell the riot and promote greater harmony in its aftermath.
Sections of the Chicago economy were shut down for several days during and after the riots since plants were closed to avoid interaction among bickering groups. Mayor Thompson drew on his association with this riot to influence later political elections.