Chicagoan Mahalia Jackson (1911-1972), the "Queen of Gospel" was the most celebrated Gospel singer in the world.

She was born on October 26, 1911, as Mahala Jackson and nicknamed "Halie." Jackson grew up in the Black Pearl section of the Carrollton neighborhood of uptown New Orleans.

In 1927, at the age of 16, Mahalia Jackson moved to Chicago, Illinois, in the midst of the Great Migration.

In 1929, Jackson met the composer Thomas A. Dorsey, known as the Father of Gospel Music. He gave her musical advice, and in the mid-1930s they began a 14-year association of touring, with Jackson singing Dorsey's songs in church programs and at conventions. His "Take My Hand, Precious Lord" became her signature song.

In 1930 or 1931 she added the "i" to her name, changing it from Mahala to Mahalia, so people would pronounce her name properly.

Jackson liked to practice her singing at night while she cooked and cleaned her flat. The landlord complained about the noise, so Jackson saved her money and bought her own apartment building. That didn’t work, either—now her tenants were saying she was too loud.
In 1950, Jackson became the first gospel singer to perform at Carnegie Hall when Joe Bostic produced the Negro Gospel and Religious Music Festival. She started touring Europe in 1952 and was hailed by critics as the "world's greatest gospel singer". In Paris she was called the "Angel of Peace," and throughout the continent she sang to capacity audiences. The tour, however, had to be cut short due to exhaustion. 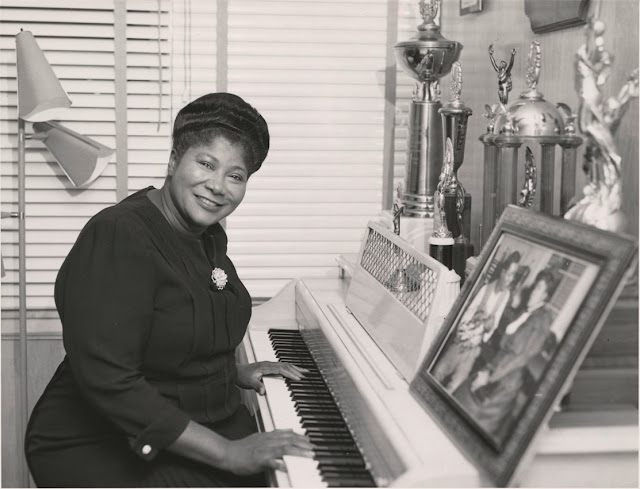 In 1956 Jackson decided the only solution was to buy a house for herself. Driving around the Chatham neighborhood on Chicago's South Side, she stopped at a number of homes with “For Sale” signs out front. At each one, she was told that the property had just been sold.

Chatham was an all-white area. Though restrictive covenants had been outlawed by the U.S. Supreme Court, that didn’t seem to matter. “The attention I had been getting from white people for my singing had sort of confused me,” Jackson wrote later. “They still didn’t want me as their neighbor.”

Jackson then went to a real estate agent. A white surgeon had a house on the market at 84th and Indiana. When told the identity of the prospective buyer, the surgeon said he was “proud to sell my house to Mahalia Jackson.”

The news of Jackson’s purchase at 8358 South Indiana Avenue in Chicago (Historical Marker outside the house) sent the neighborhood into a frenzy.
A local Catholic priest who tried to calm things was ignored. Protest meetings were held. Jackson received hostile phone calls at all hours of the night, threatening to dynamite the house.

The situation didn’t improve when she moved in. Rifle bullets were fired through her window. A police guard was posted, and remained in front of the house for nearly a year. “I hadn’t intended to start a crusade,” Jackson recalled. “All I wanted was a quiet, pretty home to live in.”

Early in 1958 Edward R. Murrow brought his Person-to-Person interview program to Jackson’s home. Jackson used the occasion to invite the local kids over for ice cream and cake, and a chance to appear on TV. When many of the children show up, Jackson thought she was finally being accepted.

A cynic once described integration as “the time between the first black family moving in, and the last white family moving out.” Jackson’s neighborhood followed that course. Scared by panic-peddling realtors and afflicted by their own prejudice, all the whites eventually cleared out.

At the March on Washington in 1963, Jackson sang in front of 250,000 people "How I Got Over" and "I Been 'Buked and I Been Scorned." Martin Luther King Jr. made his famous "I Have a Dream" speech there. She also sang "Take My Hand, Precious Lord" at his funeral after he was assassinated in 1968.

“The white people swore we would ruin it,” Jackson wrote about the neighborhood in her 1966 autobiography. “They said it would be a slum overnight. But it hasn’t changed. The grass is still green. The lawns are as neat as ever. Children still whiz up and down on their bikes.” So it was in 1966. And so it still is today.

She was described by entertainer Harry Belafonte as "the single most powerful black woman in the United States." She recorded about 30 albums (mostly for Columbia Records) during her career, and her 45 rpm records included a dozen "golds"—million-sellers.

She ended her career in 1971 and devoted much of her time and energy to helping others. She established the Mahalia Jackson Scholarship Foundation for young people who wanted to attend college. For her efforts in helping international understanding, she received the Silver Dove Award. Chicago remained her home until the end.

She opened a beauty parlor and a florist shop with her earnings, while also investing in real estate ($100,000 a year at her peak).

Jackson died on January 27, 1972, at Little Company of Mary Hospital in Evergreen Park, Illinois, of heart failure and diabetes complications.

Two cities paid tribute: Chicago and New Orleans. Beginning in Chicago, outside the Greater Salem Baptist Church, 50,000 people filed silently past her mahogany, glass-topped coffin in final tribute to the queen of gospel song. The next day, as many people who could—6,000 or more—filled every seat and stood along the walls of the city's public concert hall, the Arie Crown Theater of McCormick Place, for a two-hour funeral service. Her pastor, Rev. Leon Jenkins, Mayor Richard J. Daley and Mrs. Coretta Scott King eulogized her during the Chicago funeral as "a friend – proud, black and beautiful". Sammy Davis Jr. and Ella Fitzgerald paid their respects. Joseph H. Jackson, president of the National Baptist Convention, U.S.A., Inc., delivered the eulogy at the Chicago funeral. Aretha Franklin closed the Chicago rites with a moving rendition of "Precious Lord, Take My Hand."

Three days later, a thousand miles away, the scene repeated itself: again the long lines, again the silent tribute, again the thousands filling the great hall of the Rivergate Convention Center in downtown New Orleans this time.

Mahalia Jackson was inducted as a Laureate of The Lincoln Academy of Illinois and awarded the Order of Lincoln (the State’s highest honor) by the Governor of Illinois in 1967 in the area of The Performing Arts.

Mahalia Jackson won Grammy Awards in 1961, 1962, 1972 and 1976. Jackson was posthumously inducted into the Grammy Hall of Fame, a special Grammy award established in 1973 to honor artists whose recordings are at least twenty-five years old and have "qualitative or historical significance," in 1947, 1956 and 1958.