In 1872, a few months after the Great Chicago Fire, William L. Gregg found the DuPage County region to have good clay for brickmaking. He started the Excelsior Press Brick Company on 80 acres at the highest point between Lake Michigan and the Mississippi River valley on the Chicago-Aurora Branch of the Chicago Burlington and Quincy Railroad (CB&Q), which was completed in 1864, affording easy access to the North, South and West Divisions of the City of Chicago.

Early on, the area was called "Bushville" while another part of the area was called Gregg's, then later known by Gregg's Corner which was settled in the second half of the 19th Century. The Chicago Burlington and Quincy Railroad began to stop in Bushville in 1864. CB&Q renamed this stop "Greggs Milk Station" perhaps because of its proximity to the Excelsior brick company was to the train station or by the request of William Gregg. This area was Incorporated as Westmont, Illinois, in 1921, named for its location west of Chicago, the name implies "western mountain." 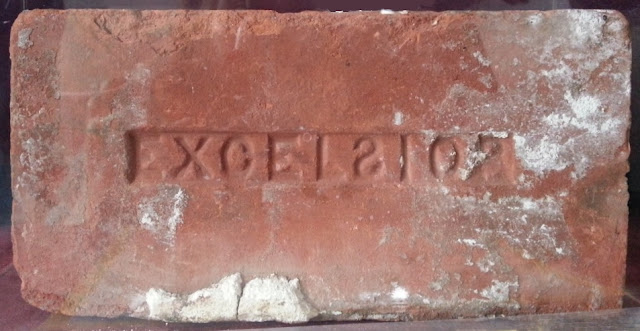 Gregg's name was left behind in the area, with Gregg’s Station, Gregg’s School, and Gregg’s Road (later Cass Avenue).
The Excelsior Press Brick Company's Chicago Office was located at: № 77 Dearborn Street (Today's Address: 503 S. Dearborn). The company employed at least 40 men and boys to produce up to 70,000 bricks in a 10 hour day.

The failure of the Excelsior Press Brick Company was due to Gregg's dry-pressed brick process which made the bricks crumbly.


BRICK BY THE MILLION.
Excerpt from Chicago Daily Tribune, October 18, 1872

A New Source of Supply of Building Material.

The Works of the Excelsior Press Brick Manufacturing Company.

Inspection of the Establishment By a Large Excursion Party.

A large excursion party of gentlemen left the Central Depot yesterday forenoon, to visit the works of the Excelsior Pressed Brick Manufacturing Company of Chicago, situated at Gregg Station, about 18 miles from the city, on the Chicago, Burlington & Quincy Railroad. Included in the party wero the Philadelphia brick men who had made a trip to Chicago for the purpose of seeing the city in general, and of inspecting the new brick factory, in which they are all more or less interested.

So many visitors came that four extra train cars were required for their transportation to Gregg Station, where they arrived in due time, and at once proceeded to inspect the brick factory, which is situated immediately south of the railroad track, having a side-track running past the kilns. The Excelsior Press Brick Company owned 80 acres of land at this point, for which they paid $175 per acre, and which is now held at $350 per acre. Here they have developed a practically inexhaustible deposit of a superior clay, which extends down to a depth of 60 feet, and here they have recently put in operation two of William L. Gregg's Excelsior Brick Machines, the first in use west of the Alleghenies, though they have been worked for over four years in Philadelphia. Several substantial frame structures have been erected for the brick machines, engine house, drying, sanding, and packing rooms, blacksmith shop, clay storehouse, etc., the works covering an area of about one acre, exclusive of the ground occupied by the kilns.

A brief sketch of the enterprise, its projector, and its claims and prospects will not be without interest to the people of Chicago, to whom, just now, the question of cheap and durable brick is of peculiar importance. Mr. Gregg, the inventor of the Excelsior Pressed Brick Machine, has spent twenty years and several fortunes in bringing his patent to perfection, and has, it is believed, fully demonstrated the uselessness of attempting to make serviceable brick from dry clay. His machine works the clay as nature moistens it, taking it directly from the bank to the machine, which accomplishes its own preparation, and does it well, if the quality of the production may be taken as a criterion. During the process of manufacture, the clay receives three distinct pressures, equal to 300 tons upon each brick, which is thus rendered extremely compact, weighing 20 percent more than ordinary brick of the same size, and, of course, renders the wall stronger, heavier, and capable of sustaining greater weight and strain. The brick are larger than the average made in Chicago, and in uniformity of shape, and perfect angles, will compare favorably with the manufactures of Philadelphia and Baltimore. Even the common bricks do not fail in these qualities. Scientific civil engineers in Philadelphia have pronounced them the strongest, best, and most serviceable brick for public works, such as culverts, sewers, arches, etc., and have sain that in the matter of dumpage alone there is a savings of at least 50 cents per thousand in comparison with home-made brick. Sixty million of these brick have been made in Philadelphia, where the two Gregg machines were unable to supply the demand.

The two machines now in operation at Gregg Station are capable of producing 70,000 brick per day of ten hours, as by the use of Caldwell's drying process the brick are dried as fast as they come from the machine, from which they are delivered on tramways to the drying tunnels, in which the "smokewater" is wholly evaporated, and the bricks are then shoved along by the same apparatus through the drying tunnels of the kiln, being handled but once previous to burning [firing]. A great feature of the establishment consists in the fact that brick may be made throughout the winter months, while hand-making yards have already closed for the season. Clay sufficient for several millions of brick is now under cover against the time when freezing weather shall put a stop to out-door work.

For the entire working of two machines, including the supply of clay, placing in the kilns, loading upon the cars, etc., forty-four men and boys are required. One month ago all these operatives were utterly unskilled in the business, but they are rapidly acquiring proficiency, and the quality of the brick is constantly improving in consequence. It is intended soon to work the machines night and day, when their total capacity will be increased to 140,000 brick per day. With these immense resources the Company can fill contracts without fail at all seasons of the year, and when it is remembered that it costs $30 per ton freight on pressed brick shipped from Philadelphia, the builders of Chicago can from some idea of the advantages which may be derived from the new manufactory at Gregg Station.

The smooth finish, fine grain, and perfect angles of the best quality of the pressed brick for fronts tell their own story, but it is well to state that the various architects in yesterday's party, after having made a thorough examination of the bricks, both common and front, held a consultation together, and unhesitatingly gave it as their opinion that, for strength in the wall, and capability of resisting pressure and strain, the Excelsior-made brick are far superior to the hand-made brick in Chicago. Another vast advantage is found in the fact that brick may be delivered on the C. B. & O. Railroad to almost any part of the city, as the road crosses the entire West Division, the business portion of the South Division, and lands in freight close to the boundary of the North Division, so that the saving of expense in cartage is a considerable item.

November 25, 1875 - In the use of Malcolm McDonald et al. vs. the Excelsior Press Brick Manufacturing Company, Judge Williams yesterday appointed D.P. Newell Receiver, under a bond of $2,000.