The Panic of 1893 was a national economic crisis set off by the collapse of two of the country's largest employers, the Philadelphia and Reading Railroad and the National Cordage Company. Following the failure of these two companies, a panic erupted on the stock market.
The financial panic lasting from May of 1893 through November of 1893, with a run on currency and the banks closed. Businesses and manufacturers did not open because they didn't have the cash to pay workers or buy materials. 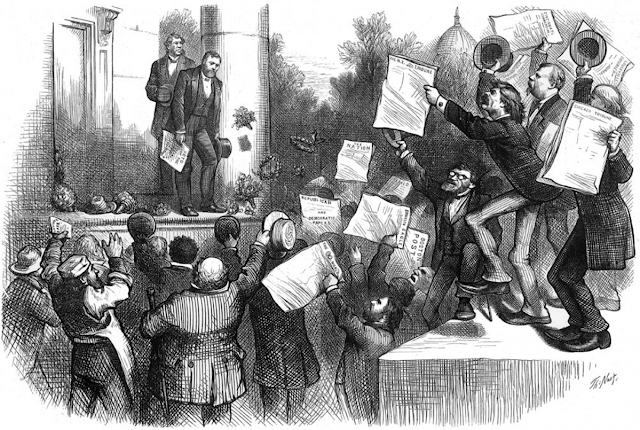 The panic included precipitous declines in the stock market which caused the failure of Wall Street brokerage houses, and the failure of 158 national banks in 1893, mostly in the South and the western United States. Other bank failures included 172 state banks, and 177 private banks, as well as 47 savings banks, 13 loan and trust companies, and 16 mortgage companies. The panic started in New York and spread to the rest of the country like a wildfire.

In a nutshell, people attempted to redeem silver notes for gold; ultimately the statutory limit for the minimum amount of gold in federal reserves was reached and U.S. Notes could no longer be successfully redeemed for gold. 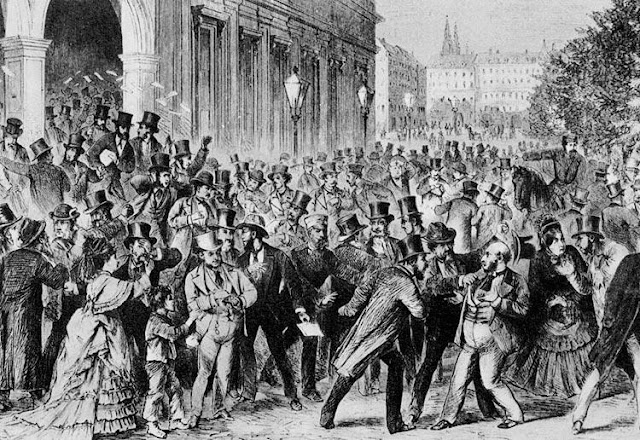 In July of 1893, for the first time, Chicago banks approved the issuance of clearinghouse loan certificates, foreshadowing the eventual suspension of cash payments, and the price of silver fell. The panic of 1893 was followed by an economic depression in employment and prices which lasted until 1897. Had the United States Federal Reserve Bank system existed, the panic probably would have been averted.
Immediately following the economic downturn, people sought relief through their elected federal government. Just as quickly, they learned what farmers had been taught in the preceding decades: A weak, inefficient government interested solely in patronage and the spoils system in order to maintain its power was in no position to help the American people face this challenge. The federal government had little in place to support those looking for work or to provide direct aid to those in need. Of course, to be fair, the government had seldom faced these questions before. Americans had to look elsewhere.

The financial doom happened during the Chicago World's Columbian Exposition. The Fair opened on May 1, 1893, and claimed 27,300,000 visitors (paying and non-paying) after closing on October 30, 1893. There were 46 countries participating in the World's Fair. The shock of the financial failure came to Chicago a week after the Exposition opened. In spite of the depression, the World's Columbian Exposition was immensely successful financially. The admission to the Fair cost 50¢ for adults and 25¢ for children. October attendance had reached over 6.8 million paid visitors - doubling August's 3.5 million. Chicago Day (October 9th) alone sold 713,646 tickets. The concession stands brought in over $4 million, the Ferris wheel (50¢ admission for two rotations - Watch the Lumière Film of the Ferris Wheel in Motion) turned a profit, and when all the calculations were complete, the Exposition itself more than broke even, with a $1 million surplus to be returned to its 30,000 stockholders.

During the summer of 1893 commercial, industrial and manufacturing depression accompanied financial panic. Businesses failed and several major railroads, with Chicago as their transportation hub, went into receivership with control handed over to the state and federal courts in bankruptcy. For the year ending in June 1894 over 125 railroads went into receivership.
The year also saw prosecutions under the Sherman Anti-Trust Act of 1890 [1] which outlawed monopolistic business practices. By July and August of 1893 unemployment in factories was severe, and wage reductions widespread. Many banks were reporting declines in their gold reserves; the United States debt increased and money and gold flowed out of the country. The depression reached its low point in July of 1894. About 20%-25% of the United States workforce was unemployed at the panic's peak. 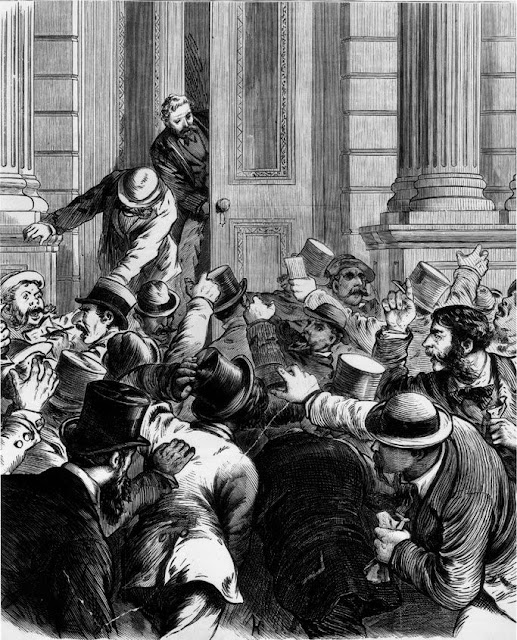 The economic misery was exacerbated by an extraordinarily harsh winter in 1893, Coxey’s army of unemployed marched to Washington, D.C. in 1894, and in April of 1894 more than 40,000 workers were reported to be involved in over thirty national strikes. The most dramatic and important of all of these strikes was the Pullman Strike which started in May of 1894 which tied up 50,000 miles of rail on July 26. Jane Addams, Florence Kelley, and many others at Hull House spoke out and wrote about the circumstances and conditions of the strike.

As with many former and subsequent financial crises, there were international roots and ramifications.
President Grover Cleveland was blamed for the depression. Gold reserves stored in the U.S. Treasury fell to a dangerously low level. In the depths of the panic in 1895, Wall Street banker J.P. Morgan demanded a meeting with President Grover Cleveland and was granted one. In this meeting, Morgan comprised a plan for the United States to sell 3.5 million ounces of gold to the British. This forced President Cleveland to borrow $65 million in gold from J.P. Morgan and the Rothschild banking family of England. J.P. Morgan's plan was successful and the 30-year bonds were sent to England with no problem. This was the first time Morgan used his keen business knowledge for the good of the country.
President Cleveland's Republican party suffered enormous losses in the 1894 elections, largely being blamed for the downward spiral in the economy and the brutal crushing of the Pullman Strike. At one point 5,000 Federal troops, called in by Grover Cleveland over the objection of Illinois Governor John Peter Altgeld, were camped alongside the Lake in downtown Chicago.
The United States tariff policy played a role, as did the political stalemate over taxes, and whether United States currency should be backed by gold alone, or gold and silver. These issues remained central to the hotly contested presidential campaign of 1896 when the Democrat William Jennings Bryan was defeated.

The financial crash of 1893 would have come sooner to America had there not been a bumper crop of wheat in the face of European famine, and thus gold temporarily poured into the coffers of United States banks. Then there was a political revolution in Brazil, followed by a banking crisis in Australia. And the economic depression in France and Germany depressed the price of silver. This further increased the immigration to the United States, and to Chicago.

[1] The Sherman Anti-Trust Act of 1890 was the first measure passed by the U.S. Congress to prohibit trusts. It was named for Senator John Sherman of Ohio, who was a chairman of the senate finance committee and the Secretary of the Treasury under President Hayes. Several states had passed similar laws, but they were limited to intrastate businesses. The Sherman Antitrust Act was based on the constitutional power of Congress to regulate interstate commerce. (For more background, see previous milestone documents: the Constitution, Gibbons v. Ogden, and the Interstate Commerce Act.) The Sherman Anti-Trust Act passed the Senate by a vote of 51–1 on April 8, 1890, and the House by a unanimous vote of 242–0 on June 20, 1890. President Benjamin Harrison signed the bill into law on July 2, 1890.

A trust was an arrangement by which stockholders in several companies transferred their shares to a single set of trustees. In exchange, the stockholders received a certificate entitling them to a specified share of the consolidated earnings of the jointly managed companies. The trusts came to dominate a number of major industries, destroying competition. For example, on January 2, 1882, the Standard Oil Trust was formed. Attorney Samuel Dodd of Standard Oil first had the idea of a trust. A board of trustees was set up, and all the Standard properties were placed in its hands. Every stockholder received 20 trust certificates for each share of Standard Oil stock. All the profits of the component companies were sent to the nine trustees, who determined the dividends. The nine trustees elected the directors and officers of all the component companies. This allowed Standard Oil to function as a monopoly since the nine trustees ran all the component companies.

The Sherman Act authorized the Federal Government to institute proceedings against trusts in order to dissolve them. Any combination “in the form of trust or otherwise that was in restraint of trade or commerce among the several states, or with foreign nations” was declared illegal. Persons forming such combinations were subject to fines of $5,000 and a year in jail. Individuals and companies suffering losses because of trusts were permitted to sue in Federal court for triple damages. The Sherman Act was designed to restore competition but was loosely worded and failed to define such critical terms as “trust,” “combination,” “conspiracy,” and “monopoly.” Five years later, the Supreme Court dismantled the Sherman Act in United States v. E. C. Knight Company (1895). The Court ruled that the American Sugar Refining Company, one of the other defendants in the case, had not violated the law even though the company controlled about 98 percent of all sugar refining in the United States. The Court's opinion reasoned that the company’s control of manufacture did not constitute control of trade.

The Court’s ruling in E. C. Knight seemed to end any government regulation of trusts. In spite of this, during President Theodore Roosevelt’s “trust-busting” campaigns at the turn of the century, the Sherman Act was used with considerable success. In 1904 the Court upheld the government’s suit to dissolve the Northern Securities Company in the State of Minnesota v. Northern Securities Company. By 1911, President Taft had used the act against the Standard Oil Company and the American Tobacco Company. In the late 1990s, in another effort to ensure a competitive free market system, the Federal Government used the Sherman Act, then over 100 years old, against the giant Microsoft computer software company.
Presented by Dr. Neil Gale, Ph.D. at 10/22/2017 08:42:00 PM