Chicago's Lake Park was officially designated as a park on April 29, 1844. When the Illinois Central Railroad was built in Chicago in 1852, they were permitted to build a breakwater allowing the trains to enter along the lakefront on a causeway built offshore, just west of the breakwater.
The resulting lagoon between the man-made breakwater and the shoreline became a stagnant pool with unruly garbage and waste. The stench was so bad that the lagoon was filled in 1871 with rubbish and debris from the Great Chicago Fire.
In 1896 the city began extending Lake Park into the lake with additional landfill. 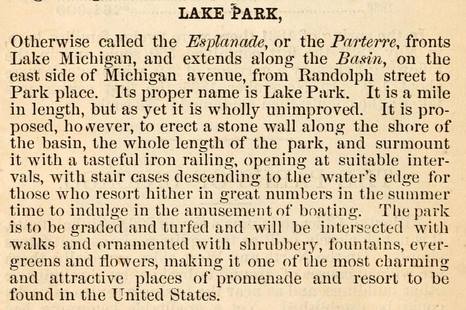