America won World War II — only to be confronted by a battle on the home front — the fight for housing. Soldiers and their stateside sweethearts had endured the war by dreaming idyllic dreams of postwar life, with happy families, tucked in new houses nestled in a newly-built suburb. Instead, of white picket fences and handsome new houses they a profound housing crisis — the demand for housing outstripped the supply. 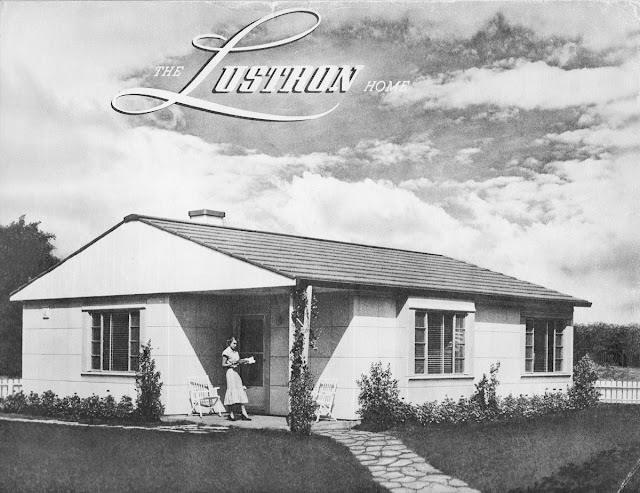 Their feeling of betrayal clouded the country’s future. At the same time, the government had another problem: giant factories stood vacant, no longer needed for military production. So how about retooling the factories to manufacture housing?

Lustron to the Rescue.
A factory-built house? The Lustron Corporation, a division of the Chicago Vitreous Enamel Corporation, was one of the first to make this connection. The grand scale of the company’s plans was awe-inspiring and its product innovative: a thoroughly modern house with walls and a roof of porcelain-enamel steel panels. 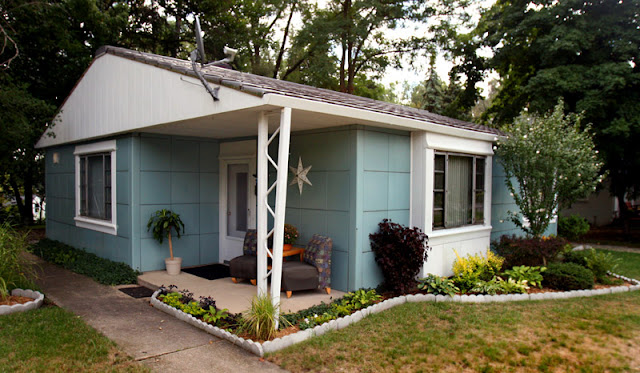 But First, a Brief History of Prefabrication.
While a steel house was novel, the idea of mass-producing buildings was not. Back in 1801, British manufacturers began prefabricating cast-iron structural systems for industrial buildings. Within a few decades, factory-produced cast-iron storefronts became popular in American cities. By the early twentieth century, Sears, Roebuck and Company, Aladdin Homes, Harris Brothers Homes, and other merchants were selling kits for wood-frame houses out of catalogs.

As the century progressed, prefab entrepreneurs pushed the design envelope. By the mid-1930s, homebuyers could choose from nearly three dozen manufacturers featuring a dizzying array of materials-steel, precast concrete, asbestos cement, gypsum, plywood. By the end of the decade, though, steel had fallen from favor because of problems with corrosion, condensation, insulation, and, most of all, the cost of the machines and facilities to fabricate the metal. The Lustron Corporation was to tackle these hurdles head-on.

First, though, World War II erupted, and the steel surpluses of the 1930s quickly became shortages as steel and other materials were dedicated to the war effort. Domestic housing construction virtually stopped, but the military forged ahead on the prefabrication frontier, developing structures that could be erected quickly without skilled tradesmen. While this effort led to advances in production techniques, prefabrication came out of the war with an image problem. “Whereas the prewar prefabricated house may have been suspect as an interesting freak,” a Bemis Foundation study noted, “the postwar product was often stereotyped in the public mind as a dreary shack.” Lustron’s snappy porcelain-enamel panels helped dispel that image. 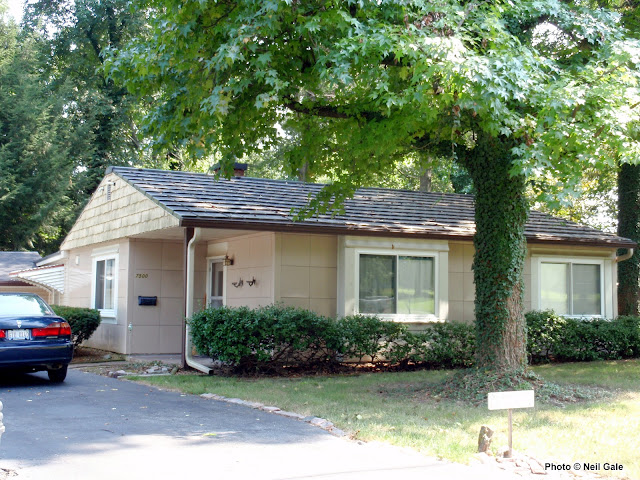 As well as a Brief History of Porcelain Enamel.
It was the use of this material, rather than the material itself, that was innovative. The process of enameling metal sheets had been developed in German and Austria in the mid-1800s. Because porcelain enamel was tough, did not fade, and was easy to clean, it was quickly adopted by manufacturers of signs, appliances, and bathroom and kitchen fixtures. By the end of the nineteenth century, metal enameling was being done on an industrial scale in the United States. Iron was initially used for the base metal; sheets of low-carbon steel became available in the early twentieth century. A technological breakthrough during World War II used lower heat for the enameling process-which allowed manufacturers to use lighter-gage metal, lowering the price of the panels. 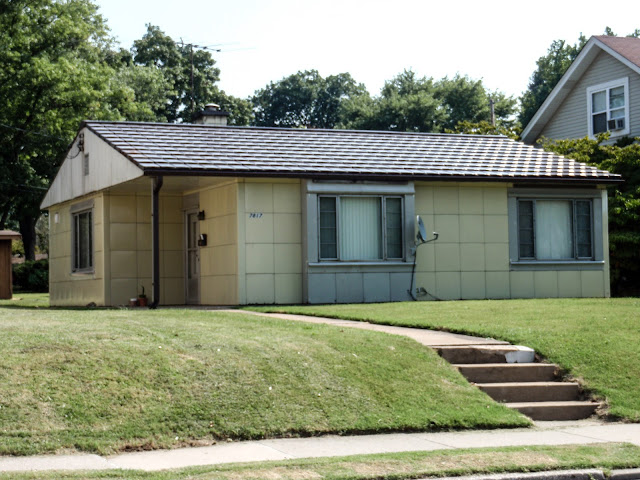 A leading manufacturer of the coated panels was the Porcelain Products Company, a subsidiary of the Chicago Vitreous Enamel Products Company. Founded in 1919, “Chicago Vit” contributed to World War II by producing tank armor for turrets and commander domes.

The company hired Carl Strandlund, a Swedish-born engineer, inventor, and entrepreneur, to retool and run the plant for the war effort. His innovations dramatically sped up production, raising the national profile of the company and himself. He was soon promoted to executive vice president and general manager. 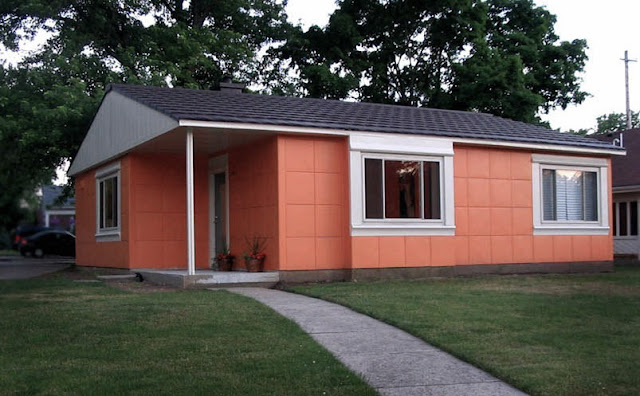 A Panel is Born.
Towards the end of the war, Strandlund devised an architectural panel that was awarded patent number 2,416,240: “The present invention relates generally to architectural porcelain enamel panels, but more particularly to a novel and improved construction and an arrangement of interlocking and sealing adjacent porcelain enamel panels, units, or adjoining connecting parts of the exterior or interior walls of a building or structure of any type or design.” Strandlund’s seemingly unsexy panel was to be the building block of the Lustron house.

And then Lustron.
Right after the war, though, his first priority was manufacturing porcelain-enameled panels for gas stations-until the bureaucracy in Washington denied him an allocation of steel. Informed that housing was a higher priority, he soon returned with a concept for an all-metal house, capturing the imagination of federal housing policy-makers. Lustron Houses were the idea of  Illinois' businessman and inventor, Carl Strandlund. In 1947, Strandlund established the Lustron Corporation and accepted the first of several multimillion-dollar loans from the Reconstruction Finance Corporation (RFC) to get the production of Lustron houses underway.

“We believe that our technology has advanced to the point where a basic commodity as necessary as a home no longer should be handmade,” Strandlund said. “We think it has advanced to the rank of the automobile-that it can be mass-produced, handled by local dealers, transported to a new locality if desired, even traded in on a larger model.” He added: “The Lustron home isn’t a cheap house by any means. It isn’t a substitute for a house similar to those we are used to now. What Lustron offered was a new way of life.”

A Home for Lustron.
Strandlund was allocated a former warplane manufacturing plant in Columbus, Ohio, for the Lustron factory. Containing over 1 million square feet of floor space-the area of 22 football fields-the the massive plant held some $15 million worth of special machinery and other industrial equipment, including 163 presses; the most colossal one could punch a bathtub from a sheet of steel in a single operation. The huge scale required huge capital investment, including a total of $37.5 million loaned by the RFC.

Demonstration Houses.
By April 1949, Lustron had over 100 “demonstration” houses strategically positioned in almost every major city east of the Rockies. Lustrons were sold through a network of builder-dealers who covered a specific geographical area. In addition to erecting the house, builder-dealers were responsible for site preparation and the foundation slab, which were not included in the factory purchase price. 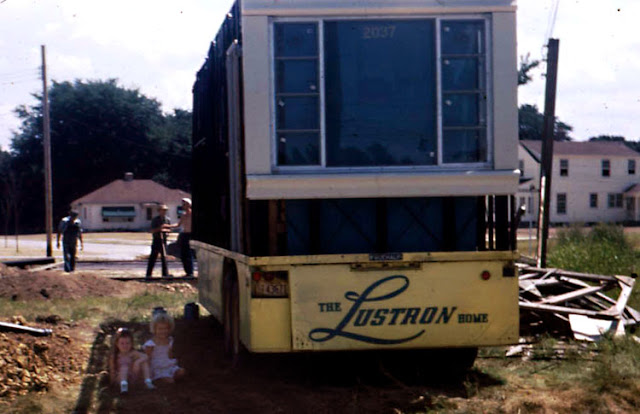 The erection process for the first Lustrons took up to 1,500 man-hours; later, the average was reduced to 350 hours, taking two weeks from start to finish. There were around 230 dealers in 35 states in Lustron’s heyday, and the houses even made it as far as the Territory of Alaska and Venezuela.

You can usually spot a Lustron house by their distinctive roofs — which resemble the ones that came in Lincoln Log sets — and their luminous pastel exteriors: pink, surf blue, maize yellow, dove gray, desert tan.
A Model Corporation.
Lustron ultimately offered eight models commercially, which varied in the number of bedrooms (two or three), size, and amenities. Color options for the semi-matte-finish exterior panels were surf blue, maize yellow, desert tan, dove gray. Lustron “accessories” included screen doors, a storm-door insert, a combination storm-screen door, and storm windows, all in aluminum; steel Venetian blinds in ivory; a picture hanger kit; and an attic fan. The company encouraged homeowners to personalize their homes by screening in porches and adding breezeways. By 1949, Lustron was also selling garage panel packages. Unlike the house panels, which were part of a self-supporting structure, the garage panels had to be attached to a traditional wood-frame structure. 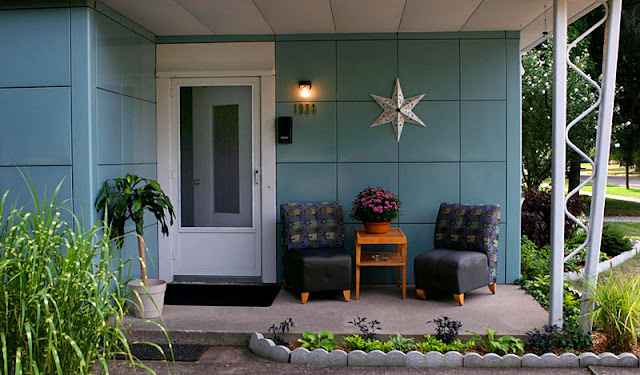 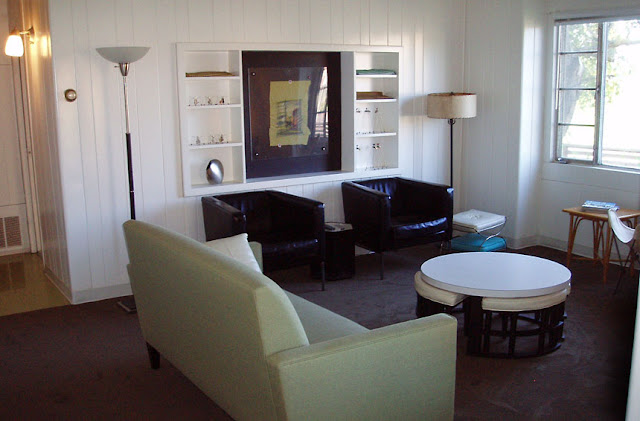 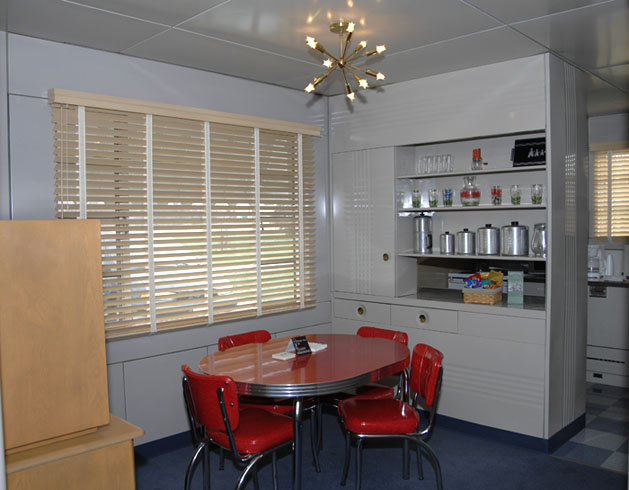 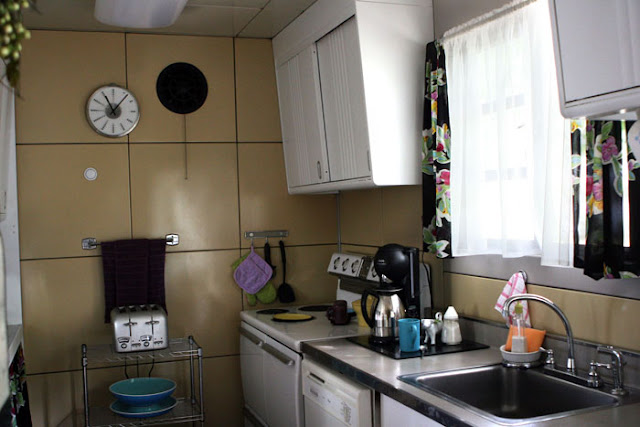 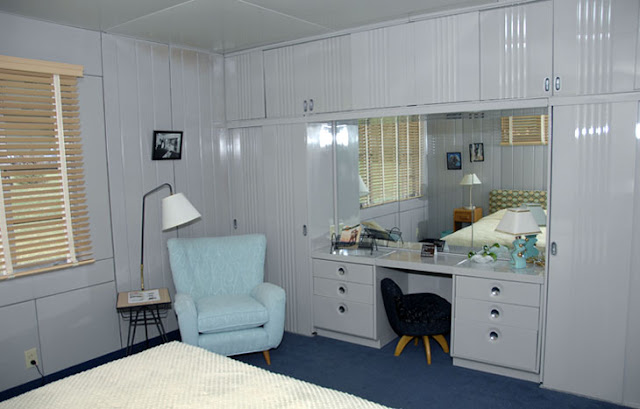 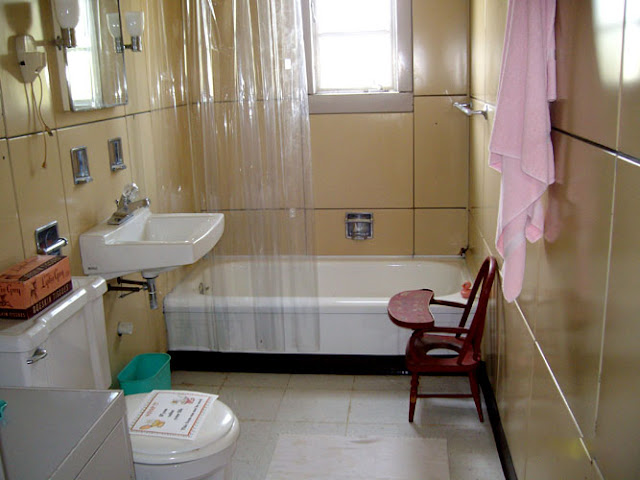 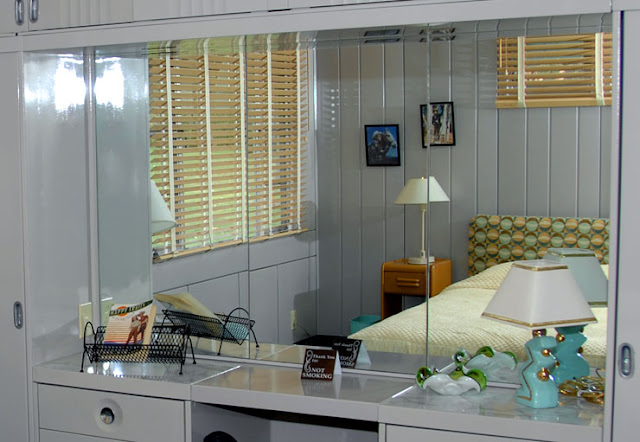 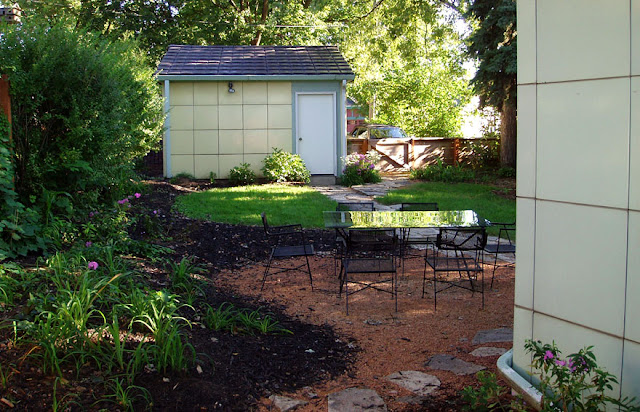 The Dream’s Demise.
Lustron’s demise was brought on by overly optimistic promises, poor decision-making, and political chicanery. Strandlund’s estimates of the plant’s production levels proved far higher than was initially feasible. Not all of the factory’s marvels turned out to be so marvelous: to be economical, for example, Lustron needed to sell about two-thirds of the output of the bathtub press to other companies. The tub, however, was a nonstandard size, making it virtually unmarketable.

The biggest problems, though, came from politics on both local and national levels. Building inspectors did not embrace the unfamiliar structural system and, with the encouragement of unions fearful of losing jobs, forbade the erection of Lustrons in some cities, including Chicago. Even more troublesome was an investigation by a U.S. Senate banking subcommittee into the RFC loans. This led, in 1950, to the loans being recalled, forcing the Lustron Corporation into bankruptcy and bringing the production line to a permanent halt by that May.

Architect and MIT professor Carl Koch, who had worked briefly for Lustron on a deluxe model that was never produced, later reflected: “When I leaf back through the records-plans, brochures, contracts, the transcript of Congressional autopsies-I admit to the confusion of feelings between the way we regarded it then... and the way it turned out to be. Seldom has there occurred a like mixture of idealism, greed, efficiency, stupidity, potential social good, and political evil. Seldom, surely, has a good idea come so close to realization, and been so decisively slugged.”

Strandlund’s dream ended, but the Lustron legacy lives on. Although some of the approximately 2,680 Lustrons that were manufactured have succumbed to environmental and economic forces, perhaps as many as 2,000 survive and are being embraced by a new generation of homeowners who appreciate the special qualities of these unique houses. 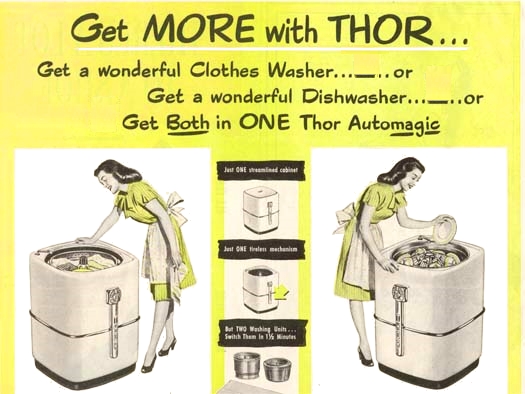 A Camera Tour of Lustron Homes - A New Standard of Living.

Things You Want to Know About the Lustron Home.