Robert Pershing Wadlow, born February 22, 1918, to normal parents in Illinois, Robert Wadlow weighed a healthy almost nine pounds. While this may seem like a typical start to life, who could have guessed that the baby would one day be known as the Giant of Illinois. 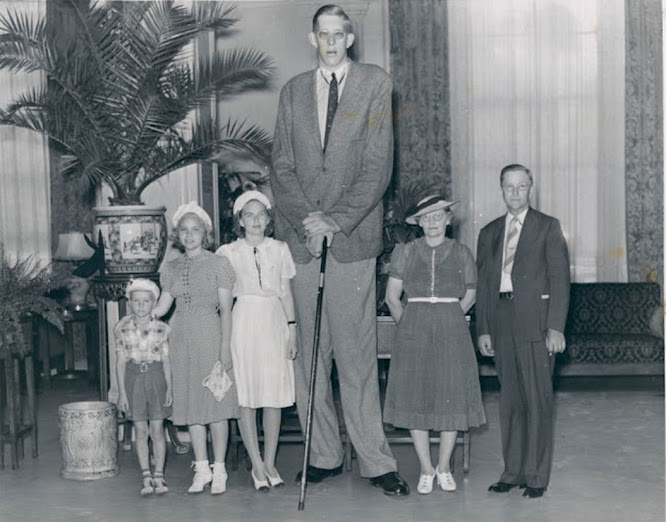 By the time Robert turned one year old, he was already over three feet tall and weighed 45 pounds.

His growth spurt started in infancy and kept growing throughout his life, thanks to a hyperactive pituitary gland problem. The condition caused his system to produce an abnormal amount of human growth hormone, and Robert would continue to grow until the end of his short life. 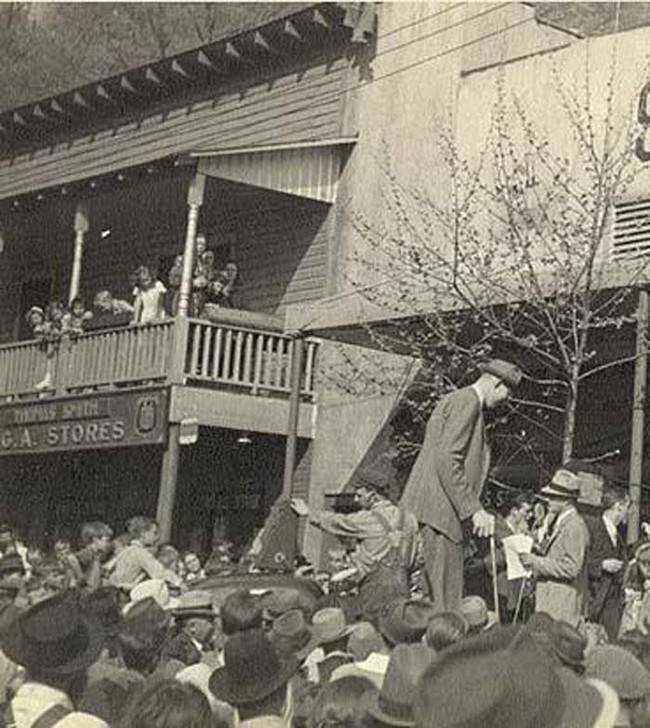 In his early teenage years, he was well over seven-feet tall, which, combined with his quiet disposition, earned him the nickname "gentle giant." He was a Boy Scout enjoying photography and learning to play the guitar. 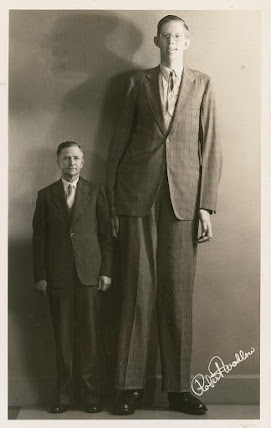 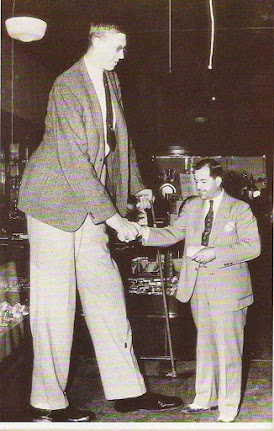 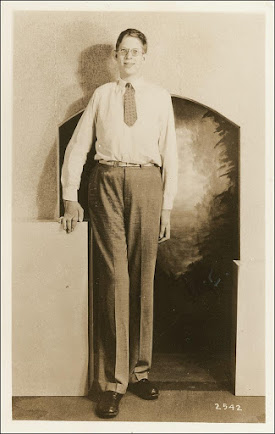 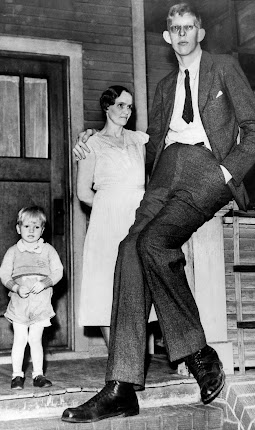 In high school, Robert was popular and active in many extracurricular activities, even serving as the advertising manager for the yearbook. He was wholly accepted by his peers. However, he lost that acceptance when he attended college and struggled with the stares, and it bothered him so much that he dropped out and returned to his parents quite penniless. 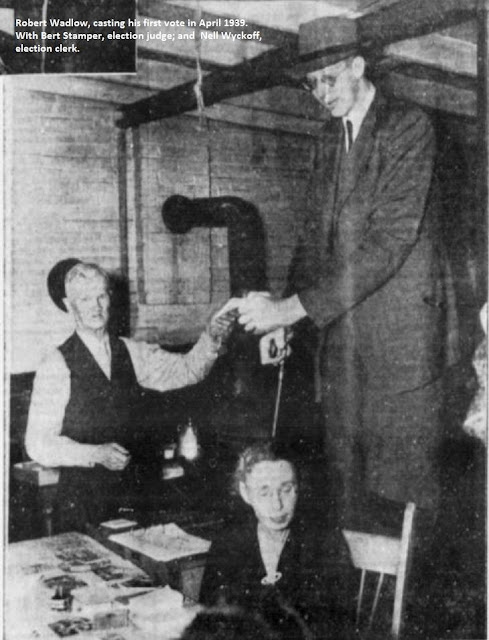 That is when his brief stint with Ringling Bros. began. His 1937 contract was brief and had strict conditions and terms. First, Robert would only attend shows at Madison Square Garden and the Boston Garden. He would display himself only two times a day for three minutes. He refused to allow any exaggeration of his height via media releases or standard height-enhancing sideshow trickery like platform shoes, top hats and trick photography. Furthermore, Robert would only display himself in the center ring and refused any association with the sideshow. Despite all of these restrictions, Robert proved to be incredibly popular.

Robert was so popular that following his time with Ringling Bros., he signed a fabulous contract with The International Shoe Company. The deal included quite a bit of travel and personal appearances, and in just under a year, Robert had made over 800 appearances and traveled over 300,000 miles.

Robert broke the world record as the tallest man in history when he was 19, but he didn't stop growing. He measured in at eight feet four inches tall at the time. 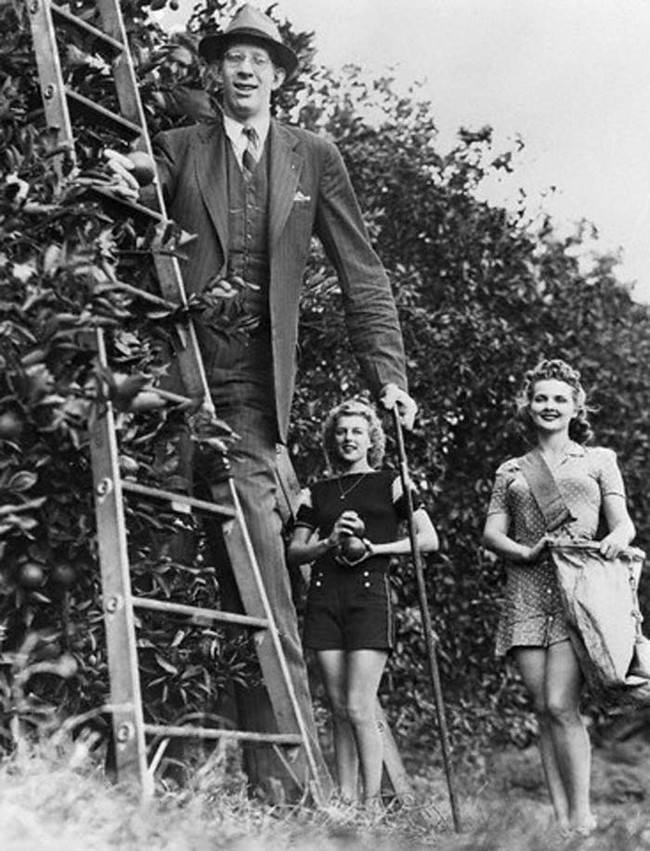 In addition to custom clothing to accommodate his size— he required massive 37AA size shoes— he needed customized furniture as regular tables and chairs were not large enough.

Eventually, his hands would grow too large to participate in his favorite hobbies, but this wasn't the only downside to his larger frame. The physical toll on his health would ultimately bring his life to an abrupt and premature end.

He suffered from weak legs and commonly experienced loss of feeling and numbness in his limbs and extremities. He depended on specially designed leg braces and a cane to move around—although he never used a wheelchair.

During an infection from a blister caused by one of these ill-fitted leg braces, Robert's health took a turn for the worst. He underwent blood transfusions and emergency surgery to control the infection, but ultimately the doctors' efforts weren't enough. His condition continued to decline because of an autoimmune disorder, and he succumbed to the infection. He died in his sleep on July 15, 1940 - he was only 22 years old. When he passed away, he measured 8 feet 11.1 inches and weighed an astounding 439 pounds.

Robert Wadlow's body was viewed by 33,295 within 28 hours after his death. His funeral was attended by 40,000 mourners, and it took twelve pallbearers to hoist his thousand-pound casket. Robert was buried in Oakwood cemetery in Alton, Illinois, on July 19, 1940, and required two standard-size grave plots. 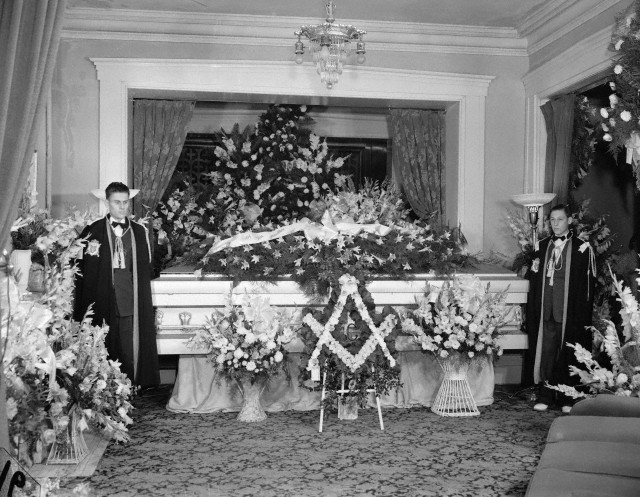 A life-sized statue of Robert Wadlow still stands in his hometown of Alton, Illinois.