Colonel John S. Wilson began his restaurant in Chicago in 1873, establishing Wilson’s Oyster House in the basement of the Morrison Hotel at 21 South Clark Street. He was the first and only caterer in Chicago to have live lobsters shipped to the Chicago market to be served. In 1875, the name was changed to the Boston Oyster House.
The cashier was a young man of a likable personality. His name was Charles E. Rector. Later he became manager of the establishment. Then he gave up his connection with Colonel Wilson to accept a position as the head caterer for a railroad. Later opened the Rector Oyster House Company restaurant at Clark and Monroe Streets. His restaurant soon eclipsed the Boston Oyster House in popularity and became the Mecca of Chicago's nightlife. Seeking new worlds to conquer, Rector opened a restaurant in New York City that became equally celebrated. 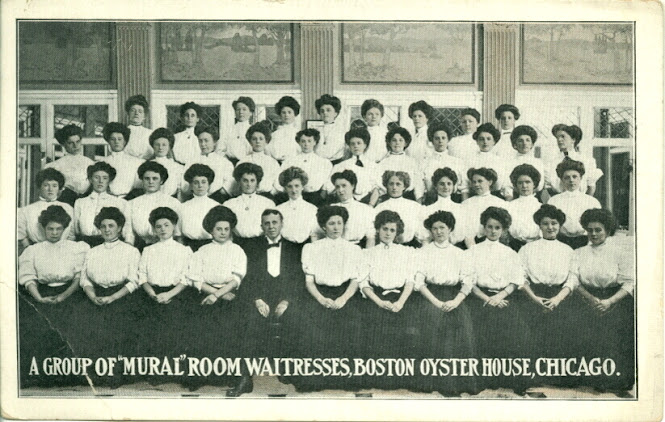 Then, in 1899, Harry C. Moir became manager of the Boston Oyster House and the old eight-story Morrison Hotel that rose above it. Prominent citizens continued to gather there. Writers came. That old Kentucky philosopher, Opie Read, sat here and talked with friends in the days when he was a newspaperman and before he became famous as a novelist. Senator James Hamilton Lewis dined there frequently, whiskers and all, and Edward F. Dunne before becoming governor of Illinois. Finley Peter Dunne, creator of "Mr. Dooley," and the late Fred A. Chappell, writer and philosopher, were other frequenters. And many recall the International Live Stock shows of those days when the stockmen and cowboys from the wild west would wind up a night amid the bright lights of the Loop with a 6 AM. breakfast at the Boston, consisting of two dozen oysters on the half shell.

This place continued through the years in its basement location. In 1925 a new Boston Oyster House blossomed forth under the auspices of Gus and Fred Mann, well-known Chicago restaurateurs. It was decorated to look like a ship's cabin — at the cost of $200,000. But alas, the Mann brothers were unable to return on their investment, and the Boston Oyster House once more fell back into the hands of Harry Moir. 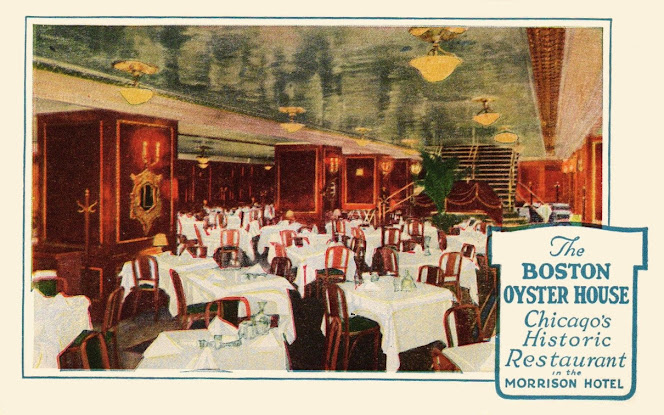 The Boston Oyster House offered no fewer than 42 oyster selections, divided among "select," "New York counts," and "shell oysters." In 1893, a dozen raw oysters were 25¢. If you ordered the same dozen fried, the price doubled to 50¢. The most expensive was broiled oysters (60¢ a dozen with celery sauce, or 75¢ with mushrooms).
The Boston survived several ownership changes and locations until it floundered during the great depression and shut its doors. 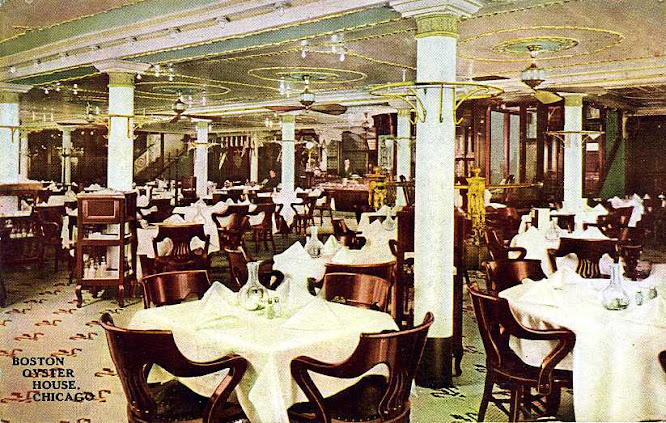 A BRIEF HISTORY OF THE MORRISON HOTEL IN CHICAGO
The Morrison Hotel was named for Orsemus Morrison, the first coroner in Chicago, who bought the site in 1838 and in 1860 built a three-story hotel with 21 rooms on the southeast corner of Clark and Madison Streets. Destroyed in the Great Chicago Fire of 1871, this was replaced by an eight-story building.

Chicago's Oyster History.
New Englanders settle in Chicago, bringing with them a taste for oysters. Chicago had become a huge oyster town, with large multilevel oyster houses. These houses would have a dance hall, lunchroom, formal dining, and taprooms in one huge building.
Delivered by sleigh from New Haven, Connecticut, the first fresh oysters in Chicago were served in 1835 at the Lake House Hotel on Kinzie Street. The Lake House Hotel establishment was our city’s first foray into (5-Star) fine dining and offered these East Coast imports to their well-heeled clientele. It was the first restaurant to use white tablecloths, napkins, menu cards, and toothpicks.
This spurred Chicago’s earliest love affair with the oyster. By 1857, there were seven "Oyster Depots" and four "Oyster Saloons" in the city. Chicago's population in 1860 was 109,000. Peaking in the Gilded Age of the 1890s, with a population of 1,001,000, and waning with Prohibition, oyster consumption was plentiful in old Chicago.
Believe it or not, Ice cream parlors also served oysters because they had all that ice.

NOTE: The oysters were kept alive on ice while being transported. If an oyster's shell opens, they die. Dead oysters carry some very dangerous bacterias for humans.