The Hub Roller Rink opened October 1950 at 4510 North Harlem Avenue, Chicago, Illinois in an area that was quite desolate. For those who are familiar with Chicago today, this area is now a shopping mall and small stores. In 1950 there was nothing between the Roller Rink and Irving Park Road. 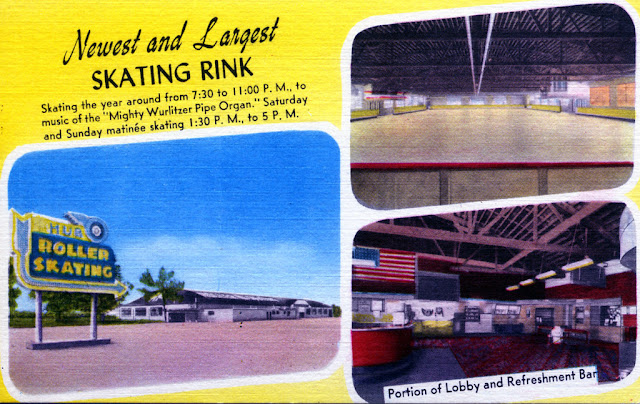 At the corner was the “Harlem Outdoor Theater (drive-in theater)”, and across the street was the Illinois State Police Headquarters. South of Irving Park was some small stores and a few restaurants that many of the Roller Rink regulars hung-out at after the rink closed. 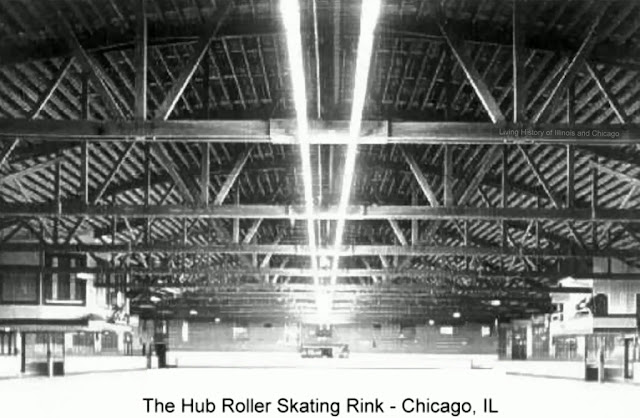 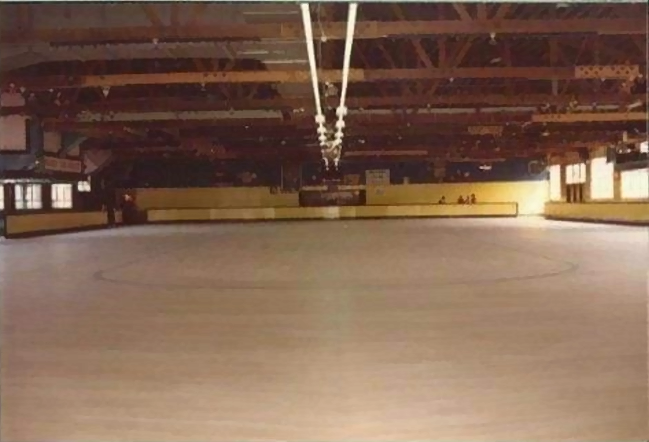 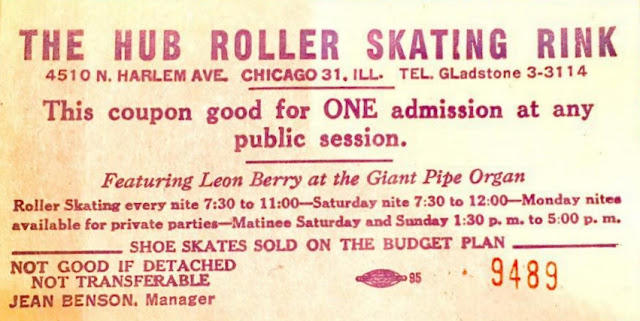 The HUB was a supersized roller skating rink for its time and housed a Giant Wurlitzer Pipe Organ, originally played by Leon Berry. The skating area was about 275 feet long and some 95 feet wide. The floor was much larger if you include the area outside of the rink railings that allowed skaters access to the rink floor. 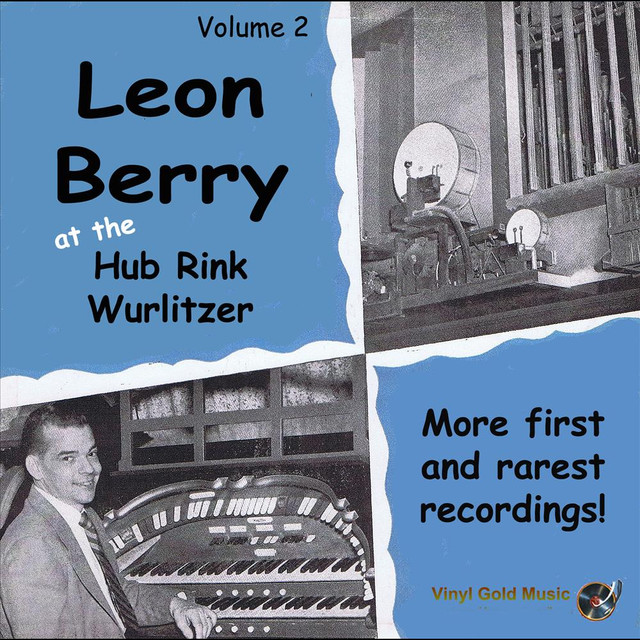 VIDEO
Music by Freddy Arnish, Organist at the Hub.

The skating had set “styles of skating” that were displayed on a lighted sign when the organ music would change tempos. The majority of the time the skating style was “All Skate” Some of the other skating styles were: Couples Only, Waltz, Fox Trot, a few fancy dances such as; Collegiate and the 14-step. 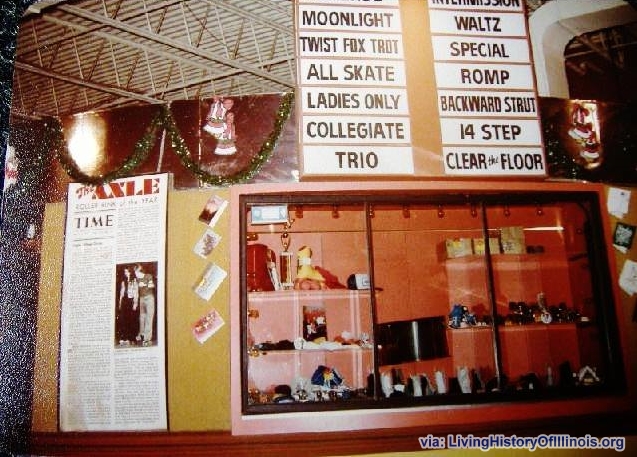 The Romp was when skaters joined hands in groups of 3, 4, or 5 people, and the end person would be “whipped” around the turns, which many times would end in a group falling from the high speeds. 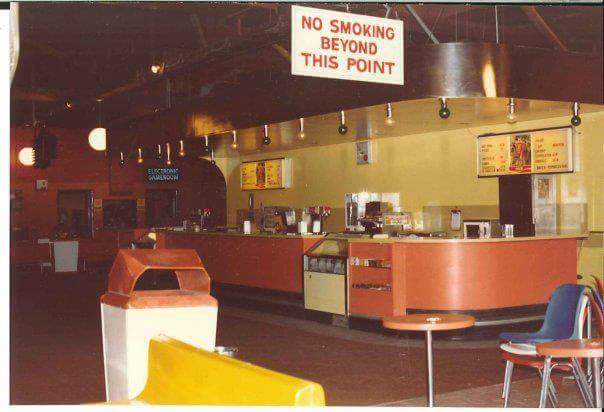 The rink was open every night and had matinees on Saturday and Sunday. Weekends always found huge crowds, some who never even put on a pair of skates. The lobby area was almost as big as the rink. It had a large oval snack bar about 40 feet long, in the center of the lobby. Around the outside walls were coat rooms, shoe skate rentals (leave your shoes as security for the rentals), a skate store, and a skate repair window (minor adjustments to rentals or personal skates were free), as well as a small dance floor with a jukebox.
The lobby was separated from the rink by a two-story office and the coatroom. The only access to the rink area was through a large opening in at the west end of the lobby. 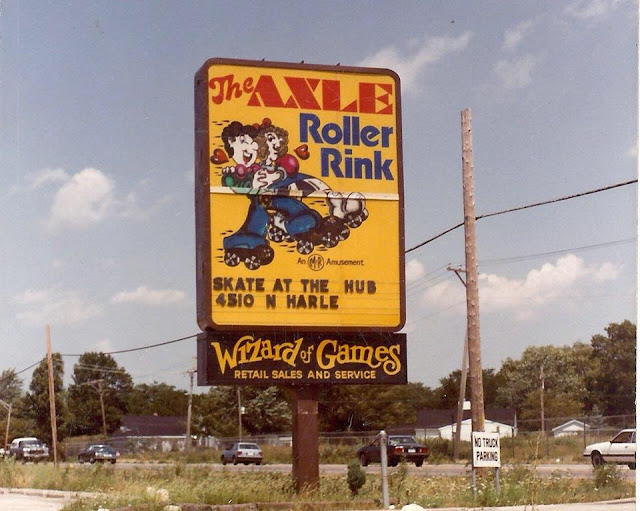 The Hub changed owners and renamed it “The Axle” in 1974. The company, “M&R Amusement” owned all three roller skating rinks. 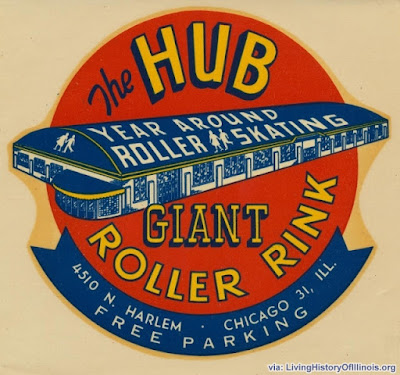 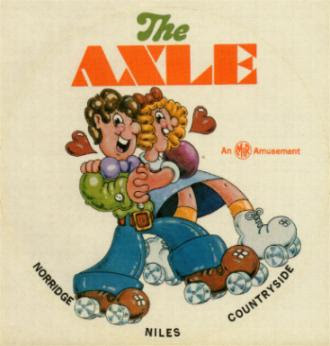 The Pro Skate Shops in the Axle Roller Rink in Niles, Illinois, in my case, gave me the first credit account I had when I was only 14 years old. I put down $60 on a great pair of professional men's roller skates which had leather above the ankle boot, high-end wheels, hubs, trucks, and a jump bar to keep the trucks from breaking off under stress. I set the trucks so loosely that when I lifted my foot and jiggled it, the trucks would wobble. After about 6 weeks (about 15 skating sessions), the shoes were broken-in and I could wear thin socks without getting any blisters!
They were very expensive, $140 ($630 today), but I skated there on weekends (2 or 3 times, including Sundays) for 5-6 years, so it paid off for me. Here's how it worked. Every time you went skating you'd have to give the Pro Shop at least $5 and your shoes to store. After skating, you returned the skates to the Pro Shop give them the roller skates to store until you came back the next time. I never told my parents until the day I paid them off (in a little over a year's time) and brought them home.
During the Intermissions, the rink held age-related speed races. I won, a lot! The winners would get a free pass for their next admission. That helped me pay off the skates quicker because my parents gave me money for the admission cost, skate rental fee, and snacks.

The Axle locations were:
The Axle closed its doors in October of 1985.
Visit the Hub and Axle Souvenir Shop.