The Chicago Rush Street Swing Bridge was destroyed on November 3, 1863.

The accident was described as "the most serious one of its kind" in the history of Chicago. The bridge was repaired after the accident and was still in use on the night of October 8, 1871, when it was destroyed by the Great Chicago Fire. 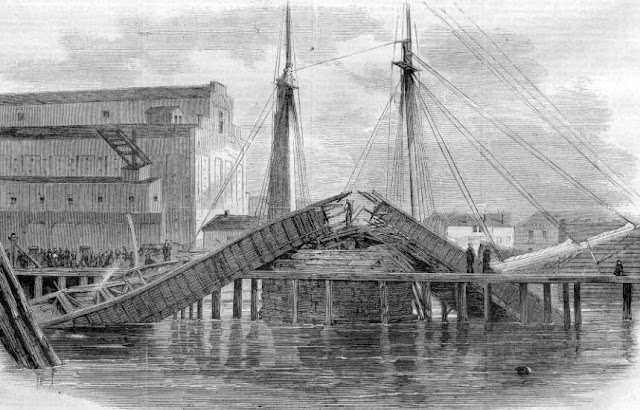 The following is all that could be ascertained:
A herd of fat cattle, numbering about one hundred and fifty, was being driven over the bridge, in a northerly direction, at a quarter before five o’clock. About sixty of them were on the bridge, the remainder having crossed over, when the tug Prindiville, having two small vessels in tow, came steaming down the river, and blew the whistle as a signal to open the bridge. A minute afterward, and before having arrived within dangerous distance, the captain saw the cattle crowding over, and immediately reversed the screw, signaling the fact to the vessels in tow at the same moment. But it was too late.

The bridge-tender saw the tug approaching, and, apprehensive of a collision, he commenced to swing the bridge,, the north end of which was covered with cattle, the south end being empty. Of course, this gave an immense preponderance to the former and no sooner did the bridge swing clear of the bearings at the abutments than the north end descended. It sunk very slowly till it had dropped eight or nine feet, and then the whole weight of the structure being rested on one edge of the platform the bridge broke in the middle with a tremendous crash, precipitating everything into the river, the two pieces falling right across the channel, one on each side, and leaving but one narrow space through which a vessel can pass.

There were on the bridge at the same time two drovers (a person who drives cattle or sheep to market), one of them mounted on horseback; James H. Dole, commission-merchant in this city; one woman with a child; a boy: and about four other men. The scene was indescribably terrible. Several of the cattle were jammed in among the broken material, being horribly mutilated, and sending forth most distressing sounds of agony. Human beings were struggling in the water, shrieking for help, and all around them were the uninjured cattle swimming about, and threatening mischief to their human companions in misfortune. Captain Lewis Berry sent off the first boat to the assistance of the sufferers.

Other boats were quickly dispatched to the scene, and then the work of rescue began. This was not easily accomplished, as the animals were very thick in the water, and it was almost impossible to move among them for the purpose of aiding first the passengers. In consequence of this and the rapidly increasing darkness, no one knew with certainty the number of those in peril. The following is believed to be the correct record of saved and lost.

The bridge-tender leaped from the platform overhead to the one below. He, fortunately, was not struck by any of the splinters and escaped with only a few bruises received in falling. His assistant is believed to be lost.

Mr. Dole escaped almost by a miracle, falling into the water unharmed, and was picked up almost immediately. The horse and buggy were lost. The animal was a rather valuable one—worth four hundred dollars.

One elderly gentleman secured one of the planks which formed the floor of the bridge, and swam ashore by its aid; three other men were picked up by the boats. The boy was also saved. He said there was a woman walking alongside him when the bridge broke. Nothing was seen of her. She is in all probability lost, with her child. It is feared that both drovers were lost nothing having been seen of them since, and the cattle were last evening roaming about the streets of the North Division, with no one to take care of them.

The horse on which the drover was riding was taken in tow by the Goble’s boat and hoisted on board the vessel. He was soon claimed and taken away. In attempting to get him ashore the plank slipped and he again fell into the river. The task of effecting a second immersion was much more difficult than the first. The animal was nearly drowned.

The majority of the cows swam to the dock without aid and were pulled on land by the bystanders. Of the others, two were seen to drown, and five others were killed after reaching the dock, their injuries being of such in nature as to render recovery impossible. Several others remained inextricably fixed in the wreck, their moaning's being plainly heard to a late hour last evening.