Lost Communities of Chicago - The Village of Pennock.

The little village of Pennock was founded in 1881. It was located at Diversey Street and Ballou (St. Louis Ave.), Fullerton, and Crawford (Pulaski Rd.) avenues. The village of Pennock was in Jefferson Township, a former civil township in Cook County, that existed as a separate municipality from 1850 until 1889 when it was annexed into the city of Chicago. Its borders were Devon Avenue on the north, Harlem Avenue on the west, Western Avenue to the east, and North Avenue to the south. 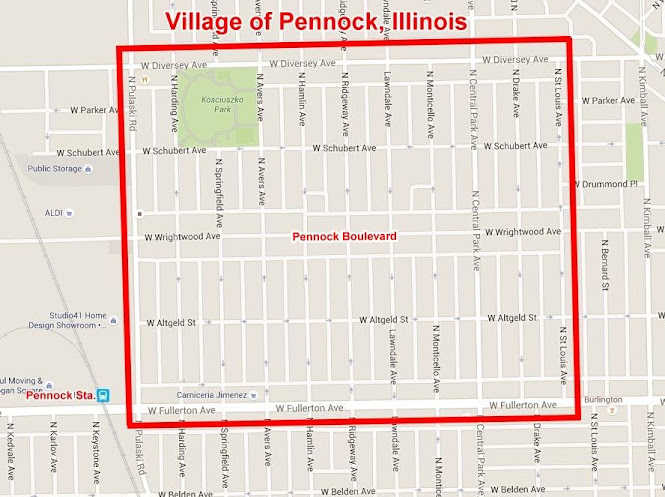 The village of Pennock was founded by Homer Pennock, a mining entrepreneur, and con man. He was going to make money, and if things didn’t work out the way they ought to, Pennock was not above cheating his way to a profit.
Perhaps the first scam Pennock pulled was in 1871 when he lied about having discovered an incredible amount of tin in a region of Canada not known for its tin. Pennock was ultimately jailed, but once he got out, he continued to pull more scams.
Pennock must have been persuasive and charismatic because he continually found financial supporters for his mining adventures. In the 1880s, Pennock, who, at that time owned a gold mine in Colorado, took over a chunk of Northwest Side farmland, from Diversey Street to Ballou Avenue (now St. Louis) and Fullerton and Crawford (now Pulaski) avenues, with the goal of building an industrial town there “that would cause the world to marvel,” according to a 1903 Chicago Tribune article below.
Pennock wasted no time getting to work. He brought carload after carload of bricks to the area and enlisted a lot of workmen to help him realize his dream. He dubbed Wrightwood Avenue “Pennock Boulevard.”
Osgood Manufacturing Company, a refrigerator and furniture maker, moved into one of Pennock’s plants, bringing about 500 workers to the area. Realizing the workers needed places to live, builders then constructed brick homes and shops to accommodate them.
That boom was short-lived.
Pennock’s main factory was destroyed in a fire and one of his mines flooded, which left him unable to finance construction. Those two setbacks combined marked the beginning of the end for Pennock and his “City of Dreams.”
With the factory gone, there was no reason for the existence of the village out on the prairie, and those who had cast their lots with Pennock flocked back to Chicago. Essentially, Pennock’s plan failed and the village crumbled.
Pennock’s failure came at a time when farms across Chicago were transforming into clusters of factories and homes.

The village of Pennock was annexed by the City of Chicago in 1889. Today's west side of Logan Square had many life cycles and was relabeled over time with distinctly different local identities—Avondale, Pennock, Polish Village, the Land of Koz (after Kosciuszko Park), and finally Logan Square, one of the official 77 communities of Chicago.

Email ThisBlogThis!Share to TwitterShare to FacebookShare to Pinterest
Living History of Illinois and Chicago® Chicago, Lost Communities of Chicago, Maps and Plats