Sisters Minna and Ada Simms Everleigh (Lester) became madams of the most famous brothel in America. The Everleigh Club was located in Chicago's notorious Levee district (hand-drawn map of this prostitution district) in a double brownstone at 2131-33 South Dearborn. Erected in 1890, the building was originally designed to accommodate the many male visitors to the 1893 World's Columbian Exposition. 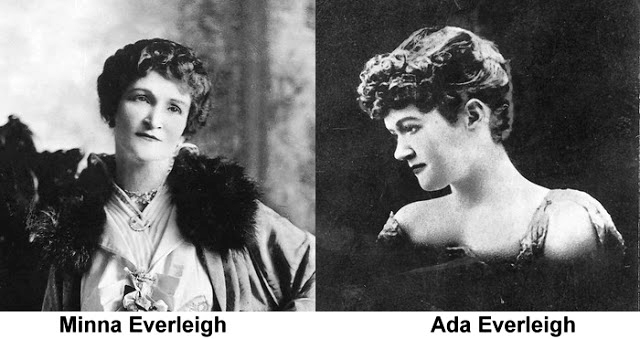 There were three orchestras, and musicians played constantly, usually on the piano accompanied by strings. Publishing houses would publicize new songs by having them play at the Everleigh Club. The house was heated with steam in the winter and cooled with electric fans in the summer. 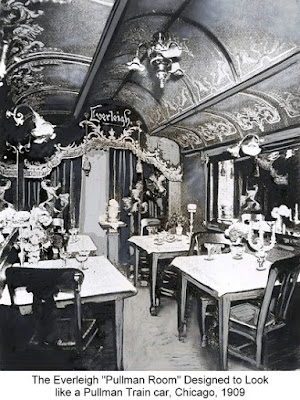 The Everleigh quickly gained a reputation as an upscale gentleman's club, so much so that the Everleigh sisters were forced to turn away prospective clients even on opening day on February 1, 1900. The club's extensive popularity afforded Minna and Ada the opportunity to select their clientele. Only those men deemed suitable by Minna and Ada gained admittance into the Everleigh Club.

The Everleigh sisters deemed a prospective client "worthy" to be admitted into the club if: the prospective client provided a letter of recommendation from an existing member, an engraved card, or a formal introduction by Minna or Ada. These standards made the club extremely exclusive, indulging the desires of only wealthy and influential men. The distinction of being let in, just because they turned down so many people, became an exclusive badge of honor just to be admitted.
By 1902, the club expanded and the sisters were making donations to the First Ward Aldermen, "Bathhouse" John Coughlin and Michael "Hinky-Dink" Kenna, to ensure their continued leeway. After the club was closed, Minna Everleigh claimed in testimony that she "always entertained state legislators free in the club." 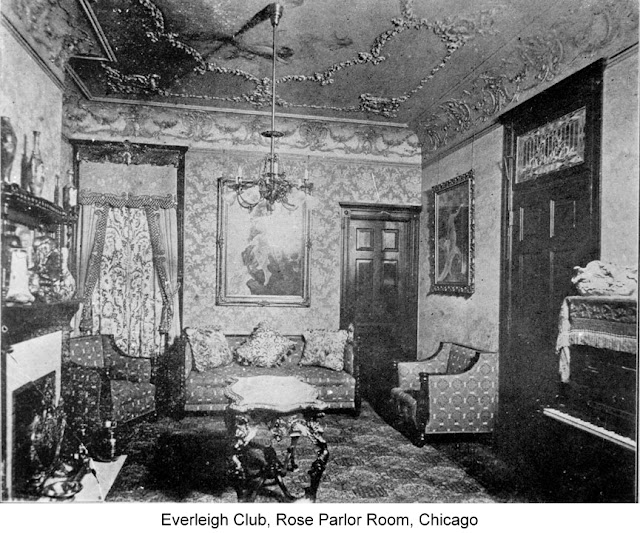 One of the notorious scandals that surrounded the Everleigh Club concerned the questionable death of Marshall Field, Jr. On November 22, 1905, Field experienced a fatal gunshot wound. Different theories arose as to how Field received the gunshot wound. It was reported that he shot himself accidentally while cleaning his gun before a hunting trip. However, rumors alleged that Field was actually at the Everleigh Club when he was shot and murdered by an Everleigh butterfly. The actual events that led to the cause of his death still arise suspicion among people. 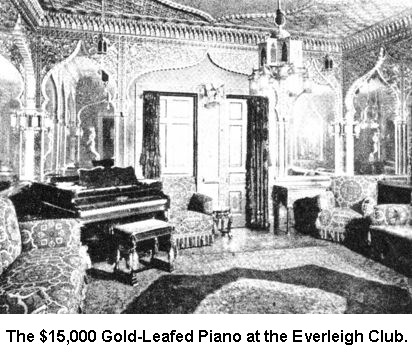 The beginning of the end for the Everleigh Club started in 1910 with the appointment of a special vice commission by Mayor Fred A. Busse. Dean Walter T. Sumner, of the Cathedral of St. Peter and Paul, was appointed chairman, and the commission included such other Chicago notables as Julius Rosenwald. Dr. W. A. Evans, and various judges and civic leaders. The City Council allocated $10,000, and the commission began its work. In all, it conducted 98 meetings and interviewed people from all levels of vice in Chicago. Because it was not a prosecuting body, and by its pledge of withholding many names and keeping them only in code, the commission was able to reach many people and obtain reliable data. 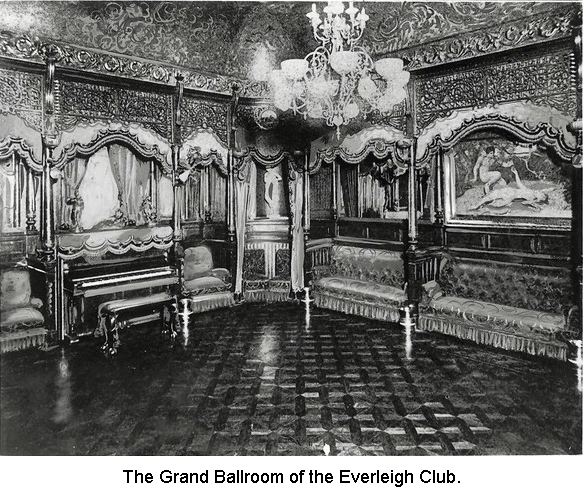 The report was presented in April of 1911. Entitled "The Social Evil in Chicago - A Study of Existing Conditions with Recommendations by the Vice Commission of Chicago," the report, with appendices, ran almost 400 pages and was very thorough. It recommended the "constant and persistent repression of prostitution" and the ultimate goal of "absolute annihilation." 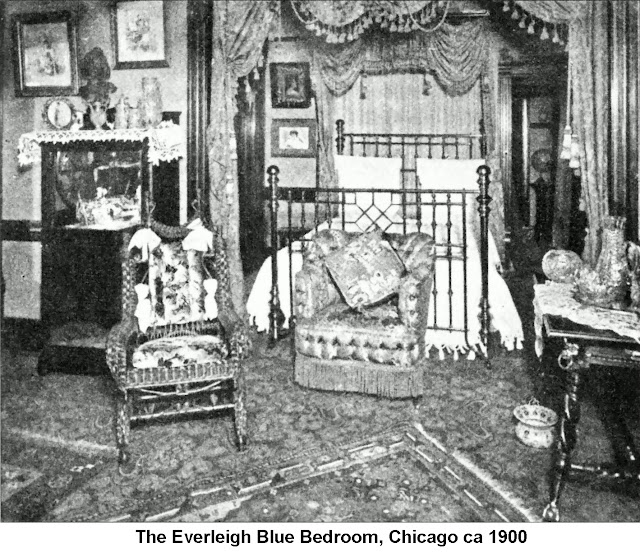 The commission's report fueled the fires for a general crackdown on vice, but the references to the Everleigh Club were particularly bothersome to many Chicago reformers. Apart from the references in the commission's report, the club catered to many reporters. it was often referred to in newspaper stories.
The final straw was the advertising booklet that was published in 1911. Filled with 30 photographs, the booklet (extremely rare) is entitled "The Everleigh Club Illustrated, 2131-33 [South] Dearborn Street, Chicago."
The Everleigh Club Illustrated.  [PDF BOOKLET]
While the photos did not depict any girls, in a strict sense, the rooms were all photographed, and many of the photos displayed the famous brass beds. Given the common knowledge about the club, many people found it extremely offensive. Most important of all, while on an out-of-town trip, Mayor Carter H. Harrison Jr., who had recently come into office replacing Mayor Busse, was shown the brochure by an inquisitive host. The closing of the Everleigh Club was now inevitable.
Although Mayor Harrison had good working relations with many of the corrupt elements, especially Bathhouse John Coughlin and Hinky Dink Kenna. the embarrassment of this brochure was more than the mayor could tolerate. On Oct. 24, 1911, at approximately noon, the mayor issued general orders that the club will be closed immediately. Despite the fact that the order was issued early in the afternoon, however, the club's members were not to be deprived of one last night.
The orders for closing were received by Ed McWeeny, general superintendent of police and the news spread to the club and many of its patrons immediately. No action was taken on the order, however, until 2:45 a.m. on October 25th. During the last night, many of the old regulars and, especially reporters. flocked to the club. Attempts were made to contact Mayor Harrison, but he could not be reached: he was supposedly asleep. While many of the people were sad and melancholy, the sisters, clad in the many diamonds, refused to be morbid. Minna reputedly said, "If the ship sinks, we're going down with a cheer and a good drink under our belts anyway." By 1 a.m., cabs were lined up, and gentlemen in silk hats marched out. None of the patrons nor the girls were arrested. At 2:45 a.m., the club was officially closed.
Within 24 hours, once all the girls understood that the club apparently would not reopen, each girl reportedly had offers of jobs from respectable clubs all around the country. The sisters, meanwhile, gathered their resources and decided to evaluate the future by touring Europe. The club was never to open again.
Realizing they could not attain anonymity in Chicago, they retired permanently and moved to New York, living under the name of Lester. Reputedly, at retirement. Ada and Minna had $1 million in cash. $200,000 in jewelry, $250,000 in l.O.U.'s that were never collected, and $150,000 in furnishings, including the gold piano. 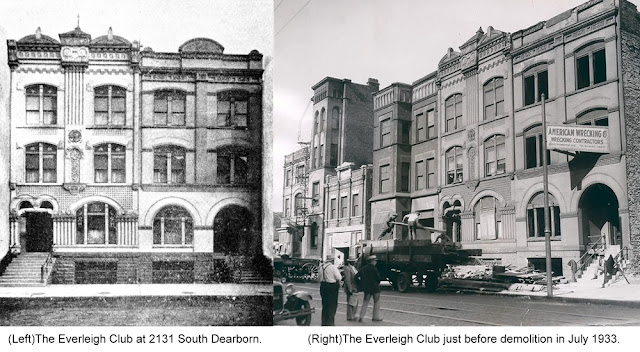