What were those Concrete Boxes used for in the Alleys? The History of Chicago's Waste Disposal. 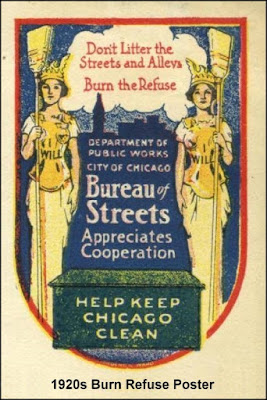 Early Chicago's waste materials included ashes from wood burned by households and businesses, horse manure on the city streets, alleys, and stables, and relatively small amounts of food waste, newspapers, and the like.

Most of it appears to have been readily biodegradable. In 1849 the city of Chicago appointed its first city scavengers. Wastes were often dumped in marshy areas on the city's edge. In Chicago's flat terrain, the transformation of lowlands into city blocks suitable for development often involved raising the level of the land through the dumping of wastes, which also eliminated standing water. Many Chicago buildings and streets now rest on as much as a dozen feet of nineteenth-century refuse. The mouth of the Chicago River was transformed by landfilled refuse, and debris from the Great Fire and much ordinary refuse was used to extend Lake Park (now Grant Park). Though residents protested the odors, rats, and insects at dumps, environmental regulation was minimal. The city sanitation services often performed poorly, leaving wooden garbage boxes overflowing, especially in immigrant neighborhoods where residents lacked clout. Reformers at the Hull House pressured the city to improve collection in the 1890s, and Jane Addams served as a local garbage inspector for several years.   Chicago's industries generated enormous quantities of waste. City ordinances limited land dumping of meatpacking wastes after 1878, but packers dumped refuse liberally into the waterways, a practice tolerated because the industry was so important to the city's economy. "Bubbly Creek," a fork of the Chicago River, was so named because of the bubbles rising from decomposing slaughterhouse wastes. Tanneries, distilleries, and other industries dumped waste into the North Branch of the Chicago River and the Calumet River. Iron and steel mill waste was used to extend the lakefront of southeast Chicago and northwestern Indiana. Industrial wastes grew in the early twentieth century. Steel mills often dumped slag on adjacent lands, where in some cases, residences were built. Oil, chemical, and steel industries dumped into waterways, especially on the Southeast Side. Chicago's Lake Michigan water supply was essentially but not completely protected from these wastes by reversing the flow of the Chicago River and by digging canals that diverted wastes away from the lake. Only slowly did the problems created by careless waste disposal methods begin to be addressed. Slag from U.S. Steel's Gary Works was used in making cement and fertilizer production. Pressure from the Metropolitan Sanitary District (now the Metropolitan Water Reclamation District of Greater Chicago) led to the neutralization of sulfuric acid discharged into the Calumet by Sherwin-Williams because it damaged sewage treatment equipment. Unfortunately, cleanup and treatment sometimes create further problems.

Sewage treatment, beginning in 1922, generated sludge that was dumped on land. And though public pressure was occasionally effective in addressing careless waste disposal, often there were no barriers to unsafe practices. The advent of nuclear energy added to the hazards. Between 1945 and 1963, for instance, radioactive thorium wastes were used as landscaping fill, deposited in ordinary dumps, or discharged into the DuPage River.

In 1905, the city was disposing of 1,614 tons of refuse per day, and clay pits and quarries near the city began to fill up. Former dumps were often used for schools or parks, including the land on which Soldier Field is built. Chicago experimented again with incineration and other disposal methods, but the most waste was dumped. By 1954, the city had no more new sites outside Lake Calumet. In 1963, Chicago exported almost three million cubic yards of debris to 72 active suburban dumps, serving booming suburban populations. The amount of household garbage grew enormously in the late twentieth century as the region's population grew and an affluent society indulged in waste-generating practices. Ashes virtually disappeared from municipal refuse as coal was replaced by other heating sources, but Americans disposed of increasing quantities of nonreturnable cans and bottles, corrugated food packaging, and plastics.
Private, single-family, two, and three-flat residences were instructed to burn their waste in the small concrete garbage incinerators the city constructed in the alleys behind each property in the 1920s. Garbage trucks would open the cooled incinerators and shovel out the ashes. Larger incinerators were used by schools, hospitals, and apartment buildings.
Chicago began instructing citizens to 'STOP BURNING RUBBISH' in the early 1950s. The city then began phasing out incinerators because state subsidies were eliminated. Secondly, the small concrete boxes were challenging to empty without leaving a trail of ash and debris that attracted rats. The rat issue resulted in a Chicago Rat Abatement program posting 'Rat Warning Notices' on heavy cardboard stapled on alley telephone poles. 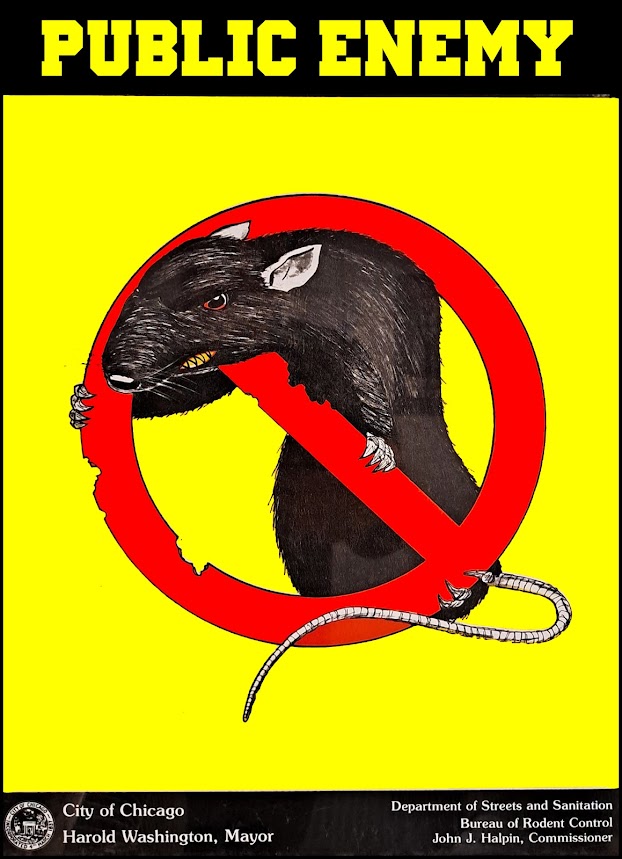 NOTE: People suddenly found themselves without trash cans for garbage pickup until the city delivered steel drums/cans, with lids, to homeowners and small businesses. Until the new cans were delivered, people would place their garbage in the brown paper bags they got at the grocery store into the incinerator, without burning, to be shoveled out by city workers.

It took demolition crews with sledgehammers to destroy the boxes. Some of them were never removed. You can still spot one here and there throughout the city.
By 1988 the typical Chicagoan threw out a ton of garbage per year. In Chicago, household wastes were picked up by a department long known as a source of patronage jobs for politicians. To cut costs in the 1980s, plastic garbage carts replaced metal garbage cans—a symbol of machine politics in Chicago, where aldermen handed them out to residents with their names stenciled on the side. Businesses, apartment owners, and most suburban governments contracted with private haulers. Private haulers were once the domain of small operators, including many African Americans, and at times they were subject to extortion by mobsters. In the 1970s and '80s, however, a few large companies dominated the business, benefiting from unique access to landfills and better finances and organization. The biggest companies owned and operated landfills and incinerators.
To accommodate the growing volume of waste, the city turned to incineration in the 1950s. From the early 1960s until 1980, Chicago burned most of its garbage. But scientists and the public grew increasingly concerned over smokestack emissions, mainly from plastics and other complex substances. In addition, incinerator ashes contained toxic chemicals. Chicago closed its last municipally operated incinerator in 1996 due to prohibitive costs.
The result was increased dependence on landfills for the city, suburban, and industrial wastes. But by midcentury, the long-term environmental hazards of landfills had become well known, especially contamination of underground water supplies. Sanitary landfill techniques to avoid these problems—including lining the site and monitoring "leachate" to ensure toxic substances do not leak into the water table—were known by the 1940s. But Chicago was reluctant to adopt them because of their higher costs. State regulations mandated sanitary landfills by 1966 but were poorly enforced initially. Many older landfills in the region pose threats to water supplies. Within the city, landfills opened or expanded only in the sparsely populated Lake Calumet region, much of its marshlands not suitable for industry or residences. Hundreds of acres of Lake Calumet itself have been filled in with Chicago refuse, and by the 1990s, the Southeast Side's Tenth Ward had over 25 square miles of landfill. Though the city had protected its Lake Michigan water supply, it paid little heed to the effect of landfilling on Calumet-area birds, fish, or groundwater. By the 1980s and 1990s, sanitary landfill techniques had become the norm. Small operations could not meet the new standards, and vocal opposition from neighbors and environmental groups limited landfills to those that could plan far in advance and build expensive facilities. By 2000, the 9 counties of northeastern Illinois had only 14 landfills, most of which the enormous suburban facilities. While earlier dumps had consisted of quarries or marshes, filled to ground level and abandoned, many "landfills" were now small mountains of wastes, stretching hundreds of feet into the air, with pipes protruding to vent escaping methane. New features on the region's flat landscape, these landfills, when shut, are often converted to use as golf courses or parks. Locating new landfills in the region became increasingly complex, and public officials and landfill operators began sending refuse downstate. Fly dumping, or dumping without a permit, became a severe problem in the 1980s, as landfill costs grew and regulations proliferated. Small private companies found it advantageous to dump illegally, targeting minority neighborhoods predominantly. The most infamous case involved a two-block area near Kildare and Roosevelt where a company owned by John Christopher dumped construction debris that rose to more than five stories. Christopher was a key figure in the federal government's "Silver Shovel" investigation into corruption-related, partly to fly dumping. The growing costs of a landfill and the potential disappearance of suitable sites created a sense of crisis in the late 1980s. A few communities adopted user fees to give householders incentives to curb waste generation. The Illinois legislature began limiting what items could be placed in landfills. The law banned putting yard waste—roughly one-fifth of municipal wastes—in sanitary landfills in 1990 and obliged local governments to recycle. Chicago embarked on a unique "blue bag" recycling system in 1995, in which recyclables are placed in special blue bags, tossed into the garbage truck with other wastes, and sorted later. The program was criticized for low participation rates and for the breakage of bags, resulting in "mixed" waste that could not be genuinely recycled. In most suburbs, recyclables were placed in special containers and picked up by a separate truck. Government pressure also brought changes in the handling of industrial wastes. In the late 1970s, courts ordered an end to dumping untreated pollutants. Dumping dredging spoils, often toxic, into Lake Michigan finally ended in 1967 and was replaced with landfilling. Under heavy regulation, specialty companies dispose of hazardous wastes, typically landfilled in specially designed sites or burned in special incinerators. Controversy continues over the long-term safety of these procedures. Past waste disposal practices have left a legacy of dangers to public health and safety. Cleaning up old disposal sites, or "brownfields," with wastes ranging from old cars to benzene, had become a significant challenge, especially for the federal government's "Superfund," which attempts to clean up and dispose of hazardous wastes at the worst sites.
In 2000, the Chicago area had more than 240 Superfund sites, about one-third of the city.


In 2020, Illinois is down to 20 Superfund sites, eight of which are still in Chicago.