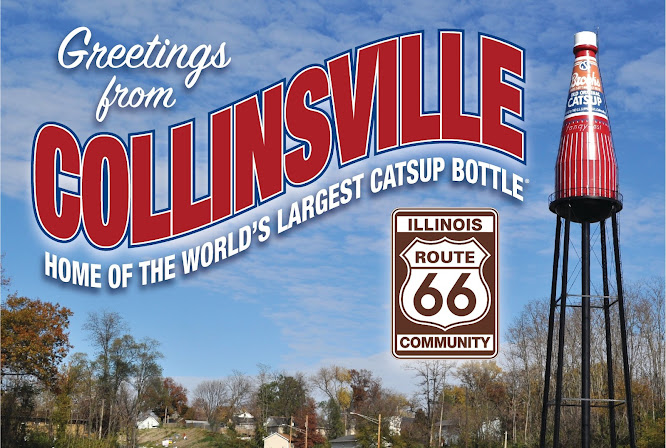 The Brooks brand name was retained by each new owner. Brooks product line earned a  surpeior reputation for quality and consistancy over many years.

It all started in 1891. A group of Collinsville businessmen raised $5,000 ($148,000 in 2023) and created the "Collinsville Canning and Packing Company." The struggling little plant went through a few different owner-operators until 1907, when the Brooks brothers, Everett and Elgin, purchased the business. They operated under the name of "Triumph Catsup and Pickle Company." Soon the name became "Brooks Tomato Products Company."
By 1919 Brooks Tomato Products Company with its office in the Kneedler Building on Main Street in downtown Collinsville. Everett W. Brooks was the President.
In 1920, the brothers sold to the "American Cone and Pretzel Company" of Philadelphia.
The G.S. Suppiger Company purchased the Collinsville processing plant. This move expanded the operations 3-fold. Suppiger also gained copyright ownership of the popular Brooks brand names and logos in June 1933.
The catsup factory had great success, surviving the Great Depression and growing by leaps and bounds through the 1940s. The plant produced much more than catsup, including chili beans, spaghetti, hominy, soups, and other sauces.
It was renamed the "Brooks Tabasco Flavor Catsup" and became extremely popular. So much so that the McIlhenny Tabasco Company threatened a lawsuit claiming the term "tabasco" was their copyrighted property. Not wanting to fight a costly legal battle, the Suppigers changed the name to "Brooks Old Original Tangy Catsup."
The company promoted its product well. In Belleville, Illinois and St. Louis, Missouri, Jumbo 12-foot high Brooks catsup bottles, adorned with neon, slowly rotated while perched on a sign pole. Brooks advertised in Sportsman's Park, home of the St. Louis Cardinals and the St. Louis Browns baseball teams.
At one time, it was America's № 1 seller among tangy catsups and the best seller in Metro (includes the Belleville, Illinois area) St. Louis, Missouri. Brooks outsold all other brands combined, 2 to 1.
The G.S. Suppiger Company purchases the Collinsville processing plant. This move expands the operations 3-fold. Suppiger gained ownership of the popular Brooks brand names in June 1933.
In 1947, W.E. Caldwell Company of Louisville, Kentucky, was contracted to build a 100,000-gallon water tower. Final drawings were approved in 1948, and the World's Largest [Watertower] Catsup Bottle was completed in October 1949.
A water tower was needed for plant operations and to supply water to the new fire protection sprinkler system. Gerhart S. Suppiger, then president of the company, suggested the tower be built in the distinctive tapered shape of their catsup bottles. Everybody was amused by the idea.
A 100,000-gallon water tower, 70 ft─1in high, made of a riveted steel tank. The tank shall sit atop 100-foot legs at the south edge of Collinsville, Illinois.
In 1959, Brooks Foods merged with P.J. Ritter Company, and the Suppigers sold their share of the company in 1960. Catsup bottling operations were moved to Summit, Indiana, in 1963, and the old factory was used as a warehouse. 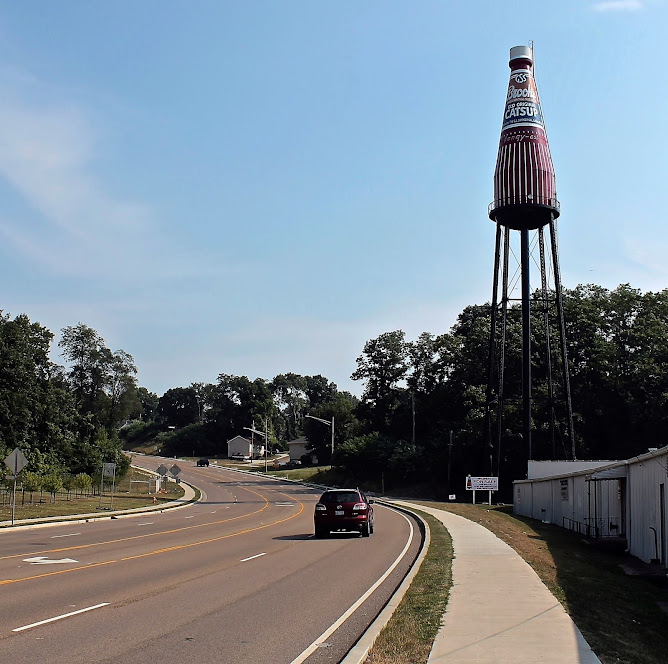 Old-timers mourned for the sweet smell of catsup that no longer wafted through town.
Brooks Foods, Inc. became a division of Curtice-Burns, Inc. of Rochester, New York, in February 1967.

In 1993, Curtice-Burns, Inc., the then-parent company of Brooks Foods, decided to sell the property. The water tower's future was in jeopardy, and the Catsup Bottle Preservation Group was formed. 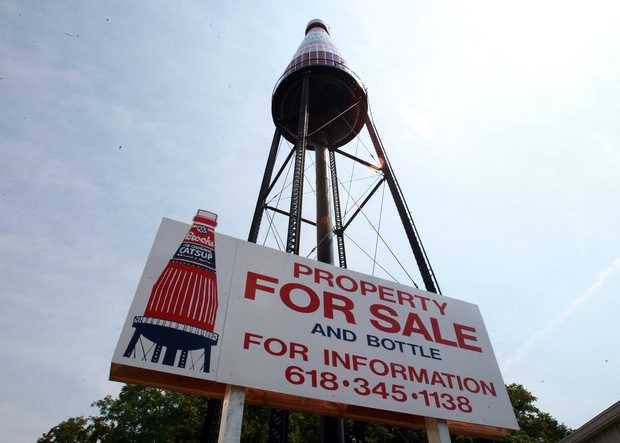 Brooks was willing to deed the tower to the city of Collinsville, Illinois, but the city declined the offer citing the cost of repairing and repainting the structure was far too much for the city's budget. The Preservation Group started a nationwide "Paint It!" campaign and began to raise the needed funds.
In 1995, due to the efforts of the Catsup Bottle Preservation Group, this landmark roadside attraction was saved from demolition and beautifully restored to its original appearance.
sidebar

The water tower catsup bottle was inducted into the National Register of Historic Places in August 2002. The landmark had already been world-renowned for some time.