In 1876, Samuel Thrall Cooper founded S.T. Cooper & Sons, the predecessor of Jockey International, Inc. Samuel Cooper started his hosiery business in St. Joseph, Michigan, to help lumberjacks who were suffering from their poor quality socks . . . laying Jockey's foundation for "Satisfying the Human Need for Comfort."
By 1878, S.T. Cooper & Sons produced nearly 2,500 pairs of seamless stockings daily. Over the next 25 years, Cooper's sons (Charles, Henry and Willis) became skilled in the business. In 1897, they introduced the Black Cat brand of hosiery for men, women & children. In 1898, the brothers moved the company and eventually moved the company into an ambitious new direction . . . Men's Underwear.
In 1900, the brothers incorporated the Cooper Underwear Company and began producing White Cat underwear. The new Cooper Underwear Company mill, which manufactured White Cat union suits, was completed in 1902. This location still serves as the longtime headquarters of Jockey International, Inc.
In 1912, the patented Cooper union suit, branded as the Kenosha Klosed Krotch, rose to the top of the underwear market and was sold faster than it could be produced.
Cooper hired Joseph C. Leyendecker, illustrator for The Saturday Evening Post, to create the "Man on the Bag" image . . . a staple of the company's brand identity and a classic American advertising image.

Cooper Underwear hired Arthur Kneibler in 1928 to head its sales and marketing team.
In 1929, the Cooper Underwear Company officially changed its name to Cooper's, Inc. That year, Coopers' developed the Singleton, a new-style union suit with short legs and a sleeveless top, packaged them in cellophane bags, a first in the underwear trade and a huge selling point in modern self-service apparel stores.
In 1934, Arthur Kneibler received a postcard from the French Riviera showing a man in a bikini-style swimsuit. This simple postcard inspired the creation of the one and only Jockey brief.
He saw this garment as a potential prototype for a new kind of men's support underwear. In September 1934, Cooper's produced an experimental prototype, men's brief style #1001. In response to its introduction, competitors labeled the new underwear style as a fad.
On January 19, 1935, Marshall Field and Company, the premier Chicago department store, unveiled a window display featuring the new brief. That day, Chicago was experiencing a severe blizzard, and the skimpy men's underwear in the window contrasted with the wintery conditions outside. 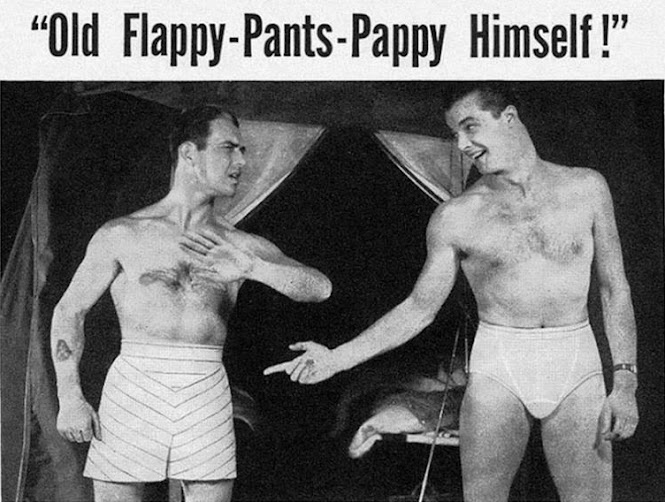 Under these circumstances, Marshall Field &Co. managers were ordered to take the briefs out of the window display. When the workers assigned to carry out the order were delayed, the new underwear style stayed on display, prompting an unexpected demand surge for the product. More than 600 briefs were sold before noon at 50¢ apiece.
Over the following three months, Marshall Field & Co. sold 30,000 briefs, and Jockey briefs began "Changing the Underwear Habits for Men Nationwide."
The Jockey Y-Front brief was invented later that year and became Cooper's most sought-after item. The success of the Y-Front brief was followed by the design of the Jockey Midway Brief.
Cooper's signed its first international license agreement with the Canadian J.R. Moodie company in 1936. That same year, European export agents began placing orders for Cooper's products. During the remaining century, licensee agreements were signed in Australia, Europe, South America, Asia and Africa.
At a retail convention in Chicago in 1938, Cooper's hosted one of the first Underwear Fashion Shows featuring "The Cellophane Wedding."
A Cooper's salesman in 1939 invented a ground-breaking countertop display and dispenser to organize sizes and styles of underwear.
1946 ushered in one of the company's most important merchandising tools...endorsements from star athletes… one of the first being home run king Babe Ruth. In 1947, the Jockey® brand name was stitched into the waistband of the underwear for the first time.
Cooper's advertised in the first issue of Sports Illustrated magazine in 1954.
The Jockey Low Rise brief was born in 1961 and became hugely successful in Europe. Cooper introduced the Jockey Life Low Rise briefs to the United States in 1965.
In 1971, Coopers, Inc. changed its name to Jockey Menswear, Inc., and then changed its name to Jockey International, Inc. in 1972.
Jockey launched the first generation of its Web site in 1997. Jockey increased its retail capabilities in 1999 with the launch of Jockey.com.
Today Jockey International, Inc. is active in more than 120 countries, marketing underwear, socks, thermals, sleepwear, activewear, sportswear, and loungewear, in men's, women's and children's ranges.
Compiled by Dr. Neil Gale, Ph.D.
Presented by Dr. Neil Gale, Ph.D. at 1/19/2023 01:47:00 PM

Email ThisBlogThis!Share to TwitterShare to FacebookShare to Pinterest
Living History of Illinois and Chicago® Chicago, Retail