The dish chop suey falls into the category of American Chinese cuisine, featuring meat (either chicken, fish, beef, shrimp, or pork), quickly cooked with vegetables like bean sprouts, bok choy, and celery, all mixed together in a gravy-like sauce and served over rice. If served over stir-fried noodles instead of rice, that's a variation on chow mein.

CHOP SUEY'S ORIGIN AND HISTORY
Much of what we know as typical Chinese food was brought over by immigrants from the Toisan region of China. It was a population of poor farmers who assembled dishes using their crops and livestock, mostly eating mixed vegetables and fried noodles, utilizing every part of the pigs and fowl they raised. According to historian Yu Reniu, the English phrase "chop suey" is borrowed from the Toisanese "Tsaap Slui" (雜碎 = 'Chop Suey' in Traditional Chinese), two characters that together refer to entrails and giblets.
Chinese immigrants first arrived in the United States in large numbers in the 1840s, heading to California during the gold rush only to be met with violent prejudice; many eventually settled in New York, where they still dealt with racism and xenophobia but were at least slightly more tolerated.
Chop suey was an early favorite, and it was first mentioned by a prominent Chinese-American journalist, Wong Chin Foo, in a list of typical dishes he thought might appeal to Western tastes. As he explained, "chop soly" would often be quite varied:

Yet that it could properly be called the 'national dish of China' was not in any doubt.
In 1883, a Chinese grocer was accused of cooking dogs and cats. In 1885, a Chinese journalist and activist, Wong Chin Foo, wrote an article for a New York culinary magazine called "The Cook," dispelling rumors that Chinese immigrants were cooking kittens and puppies.
The article sings the praises of Chinese cuisine, and in it, he lists "chop soly" as one of his favorite dishes, one that he explained every chef had their own personal recipe for, but at the core was that same Toisan principle of mixed vegetables and meats. The article was enough to inspire American journalist Allan Forman to visit New York City restaurant Mong Sing Wah, Atlas Obscura explains, and in his review of the place, pens the first description of chop suey as it came to be known in NYC Chinese restaurants. Soon the dish spread elsewhere, and every chef put their spin on it to suit their specific clientele's taste. Before long, it would become more representative of American cuisine than Chinese culture.
THE DECLINE OF CHOP SUEY
In the 1900s, chop suey was the "it" dish, and soon New York City was home to hundreds of Chinese restaurants selling it. Throughout the 1920s, the dish became ubiquitous, with recipes appearing in women's magazines and United States Army cookbooks.
In 1922, a white American University of Wisconsin graduate started the La Choy company with a Korean-American business partner to cash in on demand for "Asian" ingredients. In 1925, Louis Armstrong released the song "Cornet Chop Suey." Restaurants across the country started popping up to sell chop suey and advertised the dish with large, decorative signs with English lettering whose strokes mimicked those of Chinese characters (this font would later become known as "chop suey"). It seemed like chop suey couldn't fail. So what happened?
The shift began partly when chef Cecilia Chang opened "The Mandarin" in San Francisco in 1961. In 2015, Chang (who died in 2020 at 100 years old) told PBS, "I decided, well, since Chinatown the food is pretty bad, a lot of chop suey, I think I want to introduce real Chinese food to Americans."
Once Americans realized that people in China weren't actually eating chop suey, demand for the dish faltered. Suddenly, all they wanted was to taste authentic Chinese cuisine, even while other Americanized dishes, like General Tso's chicken, were quietly being invented in Manhattan. So why is General Tso's still so prevalent on menus while chop suey has fallen by the wayside? How do consumers decide which "non-authentic" Chinese dishes are acceptable in Chinese American cuisine and which aren't? There's no concrete answer, but perhaps it's because as the first to rise, chop suey also had to be the first to plummet. And the makeup of the dish is replicated in many other ways throughout other menu items; beef and broccoli are essentially a spin on chop suey, or at least embody the Toisan sensibility that bore chop suey.
sidebar

The Mystery of the "Chicago Chop Suey" Building. 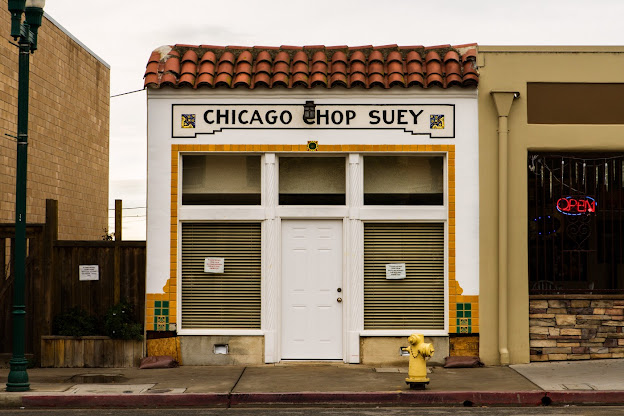 This little restaurant building is in Guadalupe, California, about 220 miles south of Los Angeles. The signs on the windows say “Please do not lean your bicycles on the building. Thank you.” The sign on the fence replaces the word "building" with "fence."
The building was constructed in 1926. According to a map showing the locations of Japanese American-owned businesses in 1940, this was originally named the "New York Chop Suey" Restaurant.
As chop suey was a traditional American-Chinese concoction, it’s interesting and confusing that it was owned by Japanese or American-Japanese people. The Japanese population was rounded-up and placed in internment camps in 1942. Few came back to Guadalupe. A couple of white allies tried to guard some of their buildings, particularly their Buddhist temple, but eventually ran out of town. After which, what wasn’t taken over was vandalized, often beyond repair. 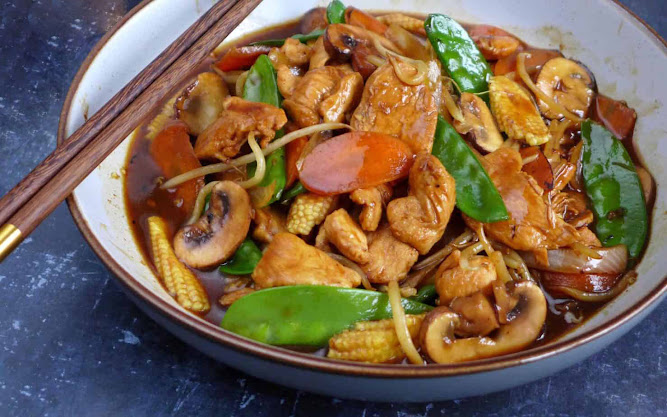