No Exit Café ● Gallery, at 6970 North Glenwood Avenue, Chicago, Illinois was a magical place that grabbed you by the scruff of your neck and wouldn't let go," said Owner Sue Kozin. (The CTA 'L' elevated tracks run down the middle of Glenwood Avenue. The Exit Café was on the west side of the 'L' tracks; between Lunt and Morse Avenues),
No Exit Café (aka No Exit, The Exit, and The Café) was started in Evanston in September 1958 by two Northwestern University students, Bill Harmon and Dick McKernan. Housed in a narrow storefront on Foster Street next to the Foster L station, The No Exit became the hangout for the beat-generation college student. Word is that Sorority girls could be depledged if they were seen in the Café. No Exit was called a beatnik coffeehouse, but the patrons noted economic and social status diversity.
About three months after the Café opened, Joseph "Joe" Greeley Moore was hired to run the No Exit Café. After nine months, Joe bought out Harmon and McKernon in 1959.
Joining the college student crowd was the racing crowd, the writers like Frank Robinson, and the folk singers like Art Thieme, Dodi Kallack, and Judy Bright. In the following years, singers like Steve Goodman, Harry Wailer, Michael Smith, Claudia Schmidt, Christy Moore, Bluesman Jim Brewer, Pat Clinton, Couple a Fat Guys, Jim Craig, and so many more graced the stage.
sidebar

No Exit Café served coffee from several La Pavoni espresso machines.  The sweets were from a French pastry shop around Rush Street. The  Café served a few types of sandwiches and snacks.

Brian Kozin started hanging out in 1961 during the hay day of the Joe Moore ownership. During the early 60s, the espresso was hot, and the Jazz was cool. Ira Sullivan led a jazz combo on Saturday afternoons. Brian also remembers one night after Jim Brewer finished his set, he needed a ride back to the west side. Brian offered to take him in Joe Moore's car. Joe asked if Brian could drive. "Sure, I can drive," Brian replied. Several months later, Brian entered No Exit and proudly showed off his new driver's license. "I thought you had a license," exclaimed Moore. "No, you asked if I could drive," was Kozin's retort.
When Northwestern University bought a large chunk of Evanston property, primarily to increase student housing in 1967, No Exit was forced to move.
Moore started looking in Chicago's Rogers Park far north community for a new location.
No Exit opened on Glenwood Avenue (still has Chicago Paver Bricks from the 1910s) at Lunt Avenue on December 7, 1967. It was amazing how quickly new customers adopted the bar as a 'regular,' joining our friends who followed us from Evanston.
No Exit provided their extended neighborhood a smoky clubhouse full of friends and people looking for lively talk, playing games like chess, the game of GO (which was second to chess), and box games like Scrabble and Monopoly, or hoping that Moore would tell another of his stories.

Joe was politically active and a "talker," friends said, and in No Exit, which took its name from Jean-Paul Sartre's French drama, "No Exit" (the script), a 1944 existentialist play, he found both a profession and a second home. "He lived in the place, practically," said Sue Kozin, who, with her husband, Brian, owned the Café from 1977 to 2000.
"I moved up from the far south side town of Harvey because I was told of this great coffeehouse opening up," said Sue Kozin.
"It took me a couple of months of peering in the door before I walked in." By spring, I was waiting tables on Thursday nights, and Steve Goodman was the entertainment. 1968 was a year of politics and demonstrations. The '68 Democratic convention and the protest riots against the Vietnam War became a hot topic around the regulars tables.
No Exit was a polling place, and Rogers Park was then part of the Democratic 'machine.' The room became even more enriched with tie-dyed Hippies interspersed with the business types. No Exit settled into music, chess, and car racing; all was copacetic.
In 1972, Joe Moore and his wife Joanne decided to buy an old resort in Fort Atkinson, Wisconsin. He then sold No Exit to Peter Steinberg, his longtime manager.
The first thing Steinberg did was to get rid of the racing crowd and throw a chair through the trophy case. It was Steinberg's gesture of freedom. The Japanese game of GO replaced chess. Mathematicians and computer programmers replaced the race car crowd. Folk music was still a staple part of the culture. Times were good, and many venues in Chicago for good music. No Exit prospered through the efforts of many artists who were working to their need to perform. Howard Berkman, Art Thieme, Dan Kedding, Roxanne Kedding, Mike Dougal, and Al Day became featured performers. The gallery space was also in use by new area artists. Ned Broderick and Pete Peterson, returning Vietnam War Veterans displayed works with humorous and grim views of life in the war.
Brian and Sue Kozin purchased No Exit from Peter Steinberg in April 1977. For Sue, this realization was put into motion some seven years earlier. "The one thing Joe Moore did was to educate me in the right and wrong ways to run a coffeehouse." according to Sue. Brian seconded that statement. We took our time and returned the Café back to a vintage 50s and 60s coffeehouse.
No Exit retained singers like Art Thieme and Howard Berkman. We added talent like Michael Smith, Suzy Boggus, Rosalie Sorels, Pat McDonald (who later headed the group Timbuk 3) and Andrew Calhoun to give a short list. Jazz was re-instituted on Saturday and Sunday afternoons with Bob Dogan, Jennie Lambert, Merle Boley, and Doug Lofstrom, and tradition was kept alive with Mike Finnerty and Mike Linn. Improv theatre was also instituted with Let's Have Lunch in the 80s and Bang Bang Spontaneous Theatre, now in its eighth year. Bang Bang was one of many springboards to send talent to Hollywood movies and TV land.
sidebar

“This is such a weird place,” says Sue Kozin, “which is why we haven’t run [away] screaming . . . yet. There are so many odd things about it that you don’t really see in the real world. Where else do the customers walk behind the counter to answer the phone? Sometimes [customers] made a pot of coffee,  paid for their cup, then top off customers cups. They make their own change [from the cash resgister]. We’ve had customers who would bring their own tea  in and then pay for it by the pot.”

The Kozins managed the coffeehouse and raised three kids in the process. According to Brian, they have met everyone from rocket scientists to murderers. "With our son David being the first, we have had some 23 children born to the regulars over the years," mentioned Sue. At the beginning of the holiday season, every year, No Exit hosted a Thanksgiving potluck dinner on the last Sunday of November. This allowed Brian and Sue to relax and spend time with the customers, musicians and friends around No Exit. This tradition lasted the whole 22 years of the Kozin ownership.

The decor was as eclectic as its customers. There were too many plants, some were donated, or a person was moving and didn't need the Elk antlers. A painting of James Dean was left one day, and an Armadillo was a gift from a waitress. The library of textbooks came from many students, and the paperback book library rule was take-one, bring-one-back. A student was doing his Cultural Anthropology paper about No Exit and spent a week cataloging everything in the Café.
In 1983 a building was bought, and volunteers built a new and permanent No Exit Café. The building was an old gentlemen's card-playing club, "The Sherman Bridge Club." It was a 'No Women' allowed smoking club, where playing Bridge was last on the agenda.
For several years after the 1983 move into the new spot, shiny black Cadillacs and Lincoln Continentals would slowly drive by looking for that bridge club. "We tried to change the decor and brighten up the place," according to Brian. "But the customers stayed away until the burlap and curios went back on the walls." 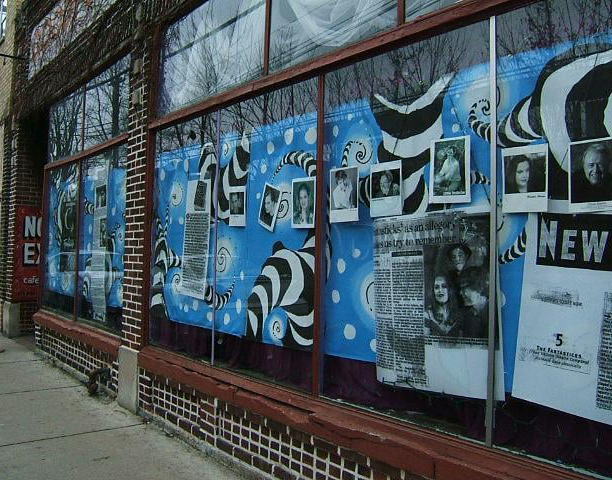 Like anything else you do for twenty years, there comes a time to stop. For the Kozins, it was the years of no vacations and the children growing up. It was time to pack it up. Lesley Kozin tried to keep the Café open one more year, but it proved too much for her. "We made it look too easy," said Sue. "There's so much that's not seen. Hiring and training, prep work, shopping, payroll, and bookkeeping are a few. It takes up a lot of time." They were burnt out.
Brian and Sue decided to sell No Exit.
In January 2000, while Bill and Sue were looking for a buyer, this happened:

Then one afternoon, a longtime regular, Cindy Olsen, was puttering around in the Café's kitchen. After a sojourn in Wicker Park, Olsen had just moved back to the neighborhood, and she told Brian how much she'd missed No Exit. Olsen has been a patron for 14 years. Like so many others, her introduction to No Exit came when she was a Northwestern University student and found No Exit a quiet place to study. A few years later, when she and a friend ran an antique store adjacent to the No Exit, she became a regular.
"Why don't you just rent the place from me, then?" Kozin asked, and he quoted her a price.
To Olsen's surprise, it sounded like a reasonable offer. She went home and called her boyfriend, John Kiolbasa. "I have something to ask you," she said.
Kiolbasa said it sounded like a great idea. That afternoon he'd run across "A Night in the Life of Jimmy Reardon" on cable and had been thinking how cool it would be to have a place like the No Exit. The next day, the couple called Kozin and discussed terms: two months' rent as a down payment and the option to buy the building in two or three years. They made a deal.

I Googled: No Exit Cafe — This article was result number 6 out of about 78M results, on the third day after publishing my article.