Autopsy notes by Dr. Robert K. Stone, Lincoln's family physician. Autopsist, assistant surgeon, Lieutenant Colonel Joseph Janvier (J.J.) Woodward. Woodward performed and wrote reports on the autopsies of both Abraham Lincoln and John Wilkes Booth.
FINDING:
The shot entered 1 inch to the left of the median line traversing left lateral sinus upper edge - occipital bone touch edge of lateral sinus and lambdoid suture. The ball struck the posterior lobe traversing it in nearly a horizontal plane (passing forward), inclining to the right. In the orifice of the wound, a scale of lead 2-1/2", in track, piece of bone - 2nd piece of bone, about 4 inches in advance in the path of the ball - entered the left ventricle, behind, followed the course of ventricle accurately, inclining upwards and inwards - plowing through the upper part of thalamus Nervi Opticum and lodged in the cerebral matter, just above the corpus striatum of the left side. The brain track of the ball was in an entirely disintegrated state and both ventricles filled with blood. 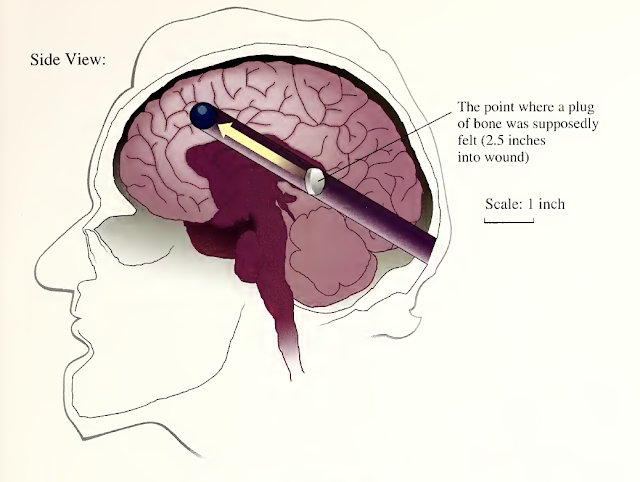 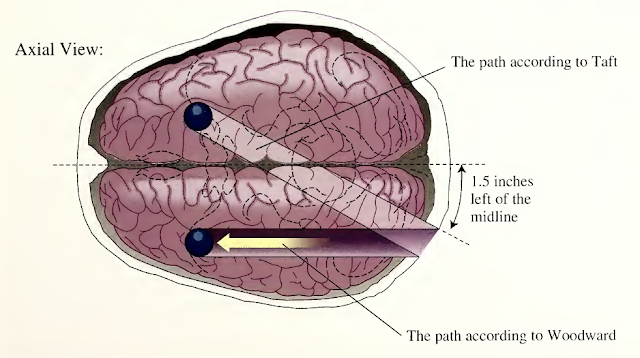 The whole brain was engorged, and bloody points were more marked than usual - on severing the dura mater was displayed a long coagulum of blood - laid upon the right hemisphere of the brain - removing dura mater (no wound in which was found) was found the orbital plates of both sides, the seat of comminuted fracture - the fragments being forced, from within, outwards. The orbito ocular palpebral membrane (eyelid) and cavity were filled with blood origin, which we didn't seek. The right had been notably protruded and, afterward, sank back after death.
Ecchymosis of left eye 1st and right eye 2nd - Great edema of serum and a little blood extravasated about the shot. Wound, clean cut, as if by a punch (2 feet off) - orbital plates, very thin.
Compiled by Dr. Neil Gale, Ph.D.
Presented by Dr. Neil Gale, Ph.D. at 10/27/2022 03:06:00 PM