Jugtown was located in Grundy County, approximately 50 miles southwest of Chicago and one mile southwest of the confluence of the Kankakee and Des Plaines rivers, or six miles east of Morris, Illinois.
The original Goose Lake was drained in the early 1800s, and the surrounding area was rich in clay. Starting as early as the 1820s, the clay was excavated by the settlers. Some of them were trained potters who built a kiln, then fired clay pieces creating earthenware for trade on the frontier, for farm and household needs.
"Jugtown" was the colloquial name given to the unplatted hamlet that developed around William White and Charles Walker's middle nineteenth-century pottery and tile works. Variously known as "Goose Lake Stoneware Manufactory and Tile Works" and "White and Company's Pottery and Tile Works." 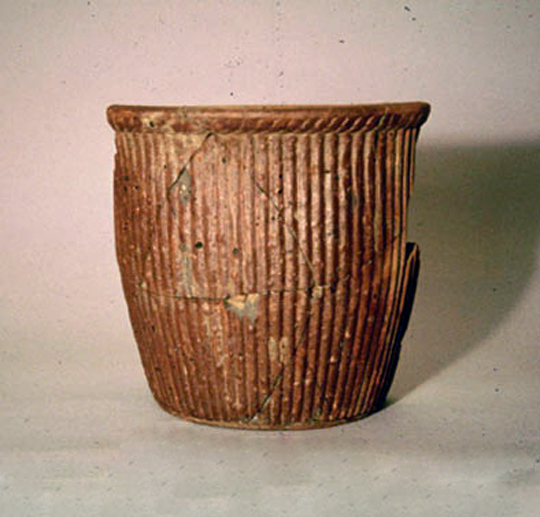 The pottery, which was established in 1856 in rural Grundy County near the western edge of what was once Goose Lake, was one of the earliest attempts at industrialized pottery and tile production in Illinois. Unfortunately for its financial backers, this pottery enterprise was unsuccessful and ceased production in 1866.
Today, the abandoned community of Jugtown is represented by two archaeological sites located along the north side of Pine Bluff Road within the "Goose Lake Prairie State Natural Area," including the "Pottery Works Site" and "Tile Works Site."
Archaeological investigations were conducted at both sites to determine their potential for inclusion on the National Register of Historic Places. To be eligible for the National Register, the sites would have to contribute information relevant to our understanding of nineteenth-century pottery production methods, types of wares produced, and the pottery workers' and families' general living conditions. Based on this work, it was determined that both sites contributed significantly to the understanding of this middle nineteenth-century craft. Thus, both sites have been listed on the National Register of Historic Places for their archaeological significance.
Compiled by Dr. Neil Gale, Ph.D.
Presented by Dr. Neil Gale, Ph.D. at 9/08/2022 02:45:00 PM