Mark Noble Sr., an English immigrant, was a noted early Chicago pioneer. He was a founder of Chicago's first Methodist Church, helped avert a famine after the Blackhawk Wars by butchering cattle and once lived in John Kinzie's cabin. In 1833, Mark and Margaret Noble claimed more than 150 acres in the area and built the first frame house in the township on the top of Union Ridge, a glacial moraine and once the shoreline of Lake Michigan. Its southern wing, built in 1833, is widely considered the oldest existing building in Chicago. The Noble-Seymour-Crippen house lays claim to being the oldest existing home in Chicago. 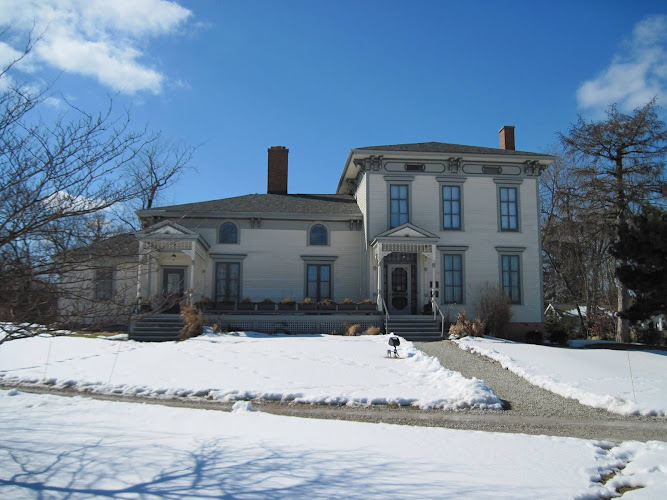 The southern wing of the house was originally used as a farmhouse. The frame structure was approximately 25 by 30 feet, and the main entrance was in the center of the south-facing end, facing Talcott Road. It was built from white pine with a brick foundation. The center of the building featured a fireplace, and there was probably a cellar. A window was found on each side of the main door; there were probably two windows along each of the long sides of the house. 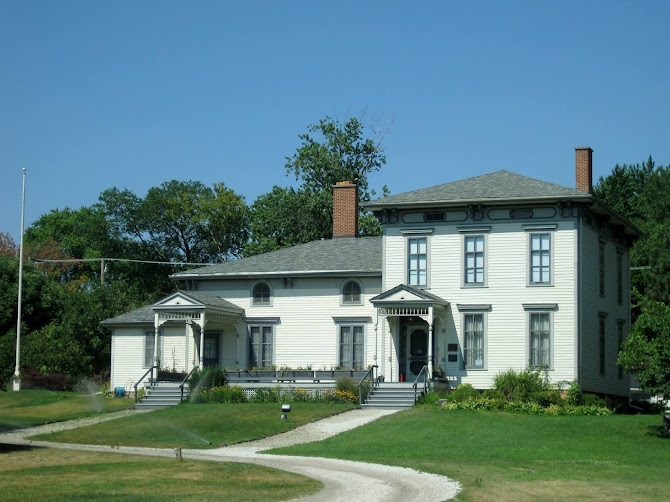 In 1868, Thomas Seymour, a prominent member of Chicago's Board of Trade, bought the house and land. He and his wife Louisa immediately added an Italianate-style northern wing to accommodate his large family and servants. He also raised the roof on the older section, the south wing, to build a second floor. This also allowed for the implementation of round, arched windows. A small, wood-frame summer kitchen was added to the south gable of the south wing. The family used the first floor of the former Noble house as a large dining room, and they used the second floor as servants' quarters. A frieze was added to this wing below the roof to ensure architectural harmony with the newer section. 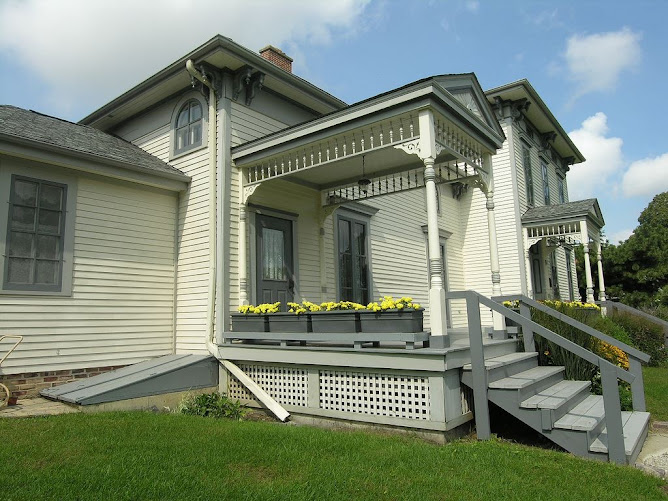 The Italianate addition has a typical floor plan for the era. A side entry hall with a stairway opens to a parlor, library, and dining room, which was the former Noble house. The second floor was used for bedrooms with a connecting door to the servants' quarters. In the 1890s, Seymour built a wood porch stretching from the south wing entrance to the Italianate entrance. Porticoes were installed over each door. 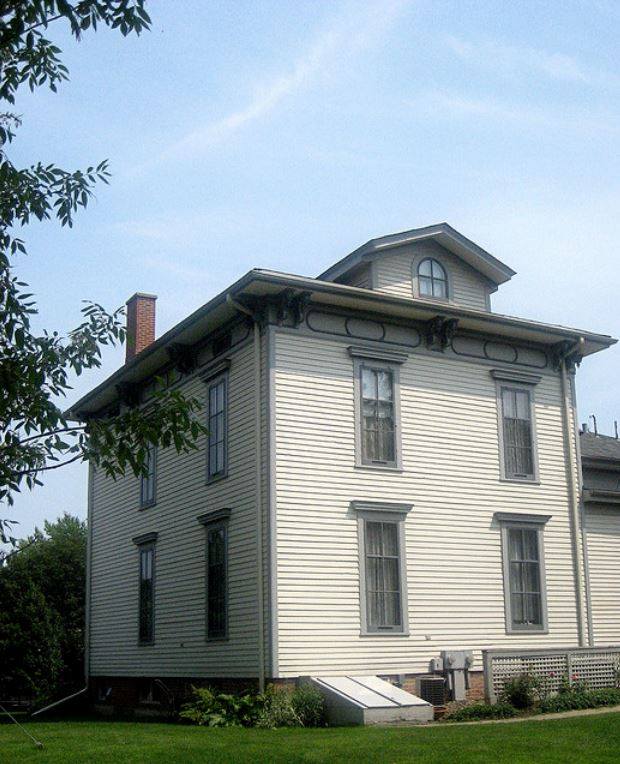 Mr. Seymour raised cattle and cultivated an apple orchard, cherry trees, and a vineyard. Seymour joined the Norwood Land and Building Association in its efforts to build a moral, healthy and beautifully landscaped suburban village. This led to the purchase of six farms and the founding of both the Township and Village of Norwood Park in 1874. Mr. Seymour served as president of the Village for 14 years. When he died in 1916, the property was sold. The house and the land south, to the far side of today's Kennedy Expressway, were sold as one of the subdivided units. 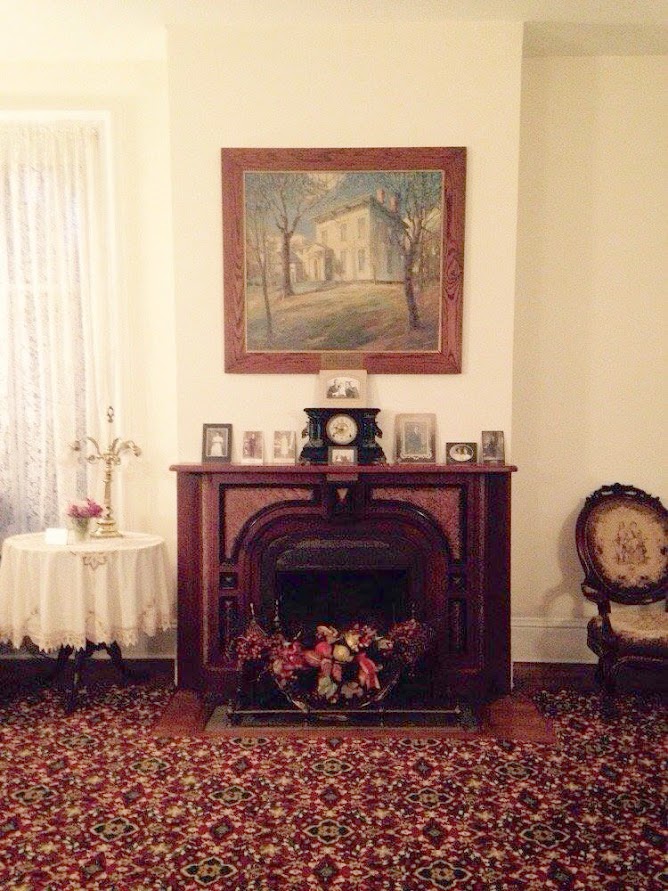 Charlotte Allen Crippen purchased the property in 1916 for her family and her business, the L.B. Allen Co. Dramatist Charlotte Allen had met her husband, concert pianist Stuart Crippen Sr., on the Chautauqua circuit. The civic-minded Crippen family sponsored community theater and musical productions and founded the local Little League Baseball program and the Norwood Park Baptist Church. They raised $750,000 for a World War II hospital plane named "The Spirit of Norwood Park." 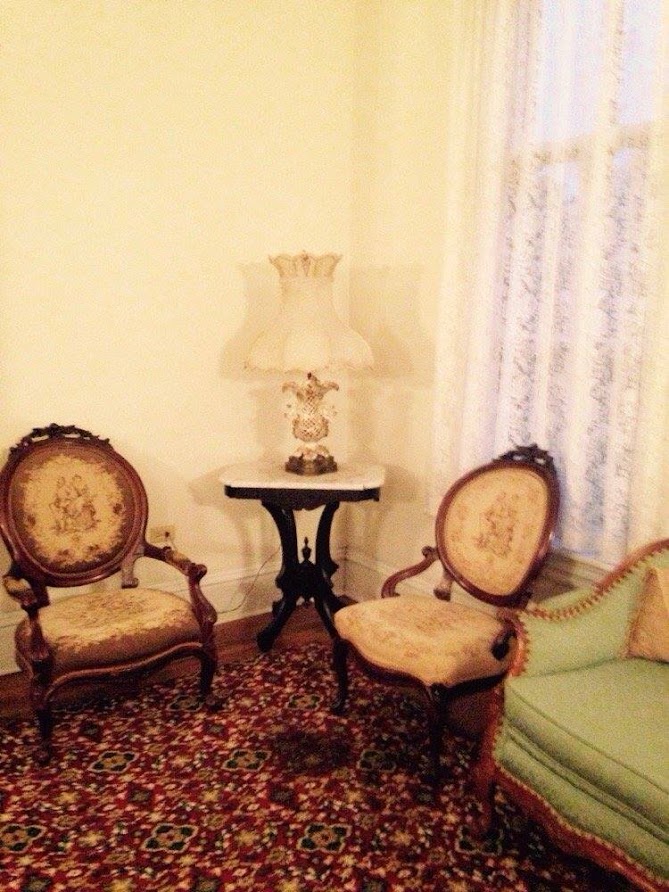 Initially, the Crippens' home was only a summer residence without plumbing or electricity. During the 1920s, the Crippens installed indoor plumbing and electricity and added a second stairway to the Noble wing. With these additions, they made it their permanent residence. During the Depression, the house was divided into two residences and occupied by their two sons, Paul and Stuart, Jr. and their families. When the Kennedy Expressway was built in 1960, the L.B. Allen Co. was forced to move and the land was sold. 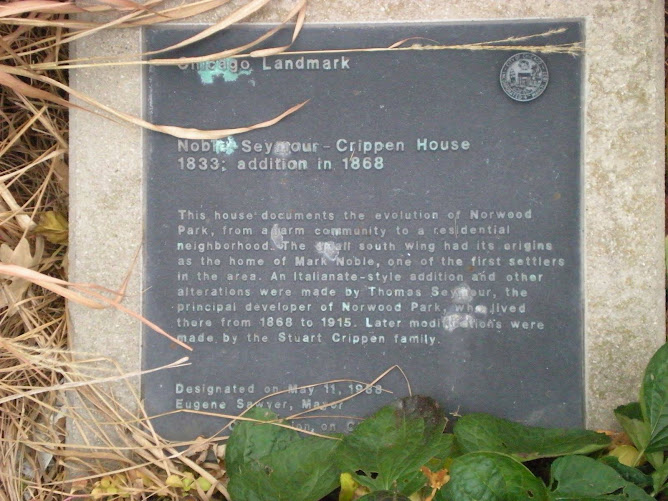 Agnes Crippen, widow of Stuart Jr., and her children, Nancy Crippen Michener and Stuart C. Crippen sold the house and the remaining 1.7 acres of land to the Norwood Park Historical Society on December 31, 1987. The Noble Seymour Crippen House was designated a City of Chicago Historic Landmark on May 11, 1988, and listed on the National Register of Historic Places on August 11, 2000.
Since 1998, the building has served as the Norwood Park Historical Society, a museum and community center at 5622-24 North Newark Avenue in Chicago.
Chicago's Oldest House Debate. Noble-Seymour-Crippen House vs. The Henry Brown Clarke House.
Compiled by Dr. Neil Gale, Ph.D.
Presented by Dr. Neil Gale, Ph.D. at 8/26/2022 03:19:00 PM