The Fabulous Story of Bunny Bread in Anna, Illinois.

The Lewis Brothers Bakery (Lewis Bros.) was established on February 1, 1925, in Anna, Illinois. Brothers Amos, Arnold and Jack Lewis mortgaged their mother's house and used that $300 to open a bakery in a rented log cabin at the rear of the property on West Chestnut Street in Anna, Illinois.
At that time, all the kneading and molding of bread was done by hand. The only machinery consisted of a dough mixer and dough brake. The wood-burning oven was made of 'homemade' bricks with the work done by the Lewis family. The business grew, and in 1926, they moved to 111 North Main Street in Anna.
The bakery operated four trucks, three driven by the Lewis Brothers, A.C, A.S. and Jack. New equipment was installed in the bake shop, bringing production up to 400 loaves per hour. They put loaves in and out of the new coke-fired oven with a long peel.
At that time, the bread was named "Milk Maid" and was baked in twin loaves, unsliced and wrapped by hand. Buns were baked in sheet pans, five dozen to the pan. Besides the Lewis Brothers, there were five other employees. 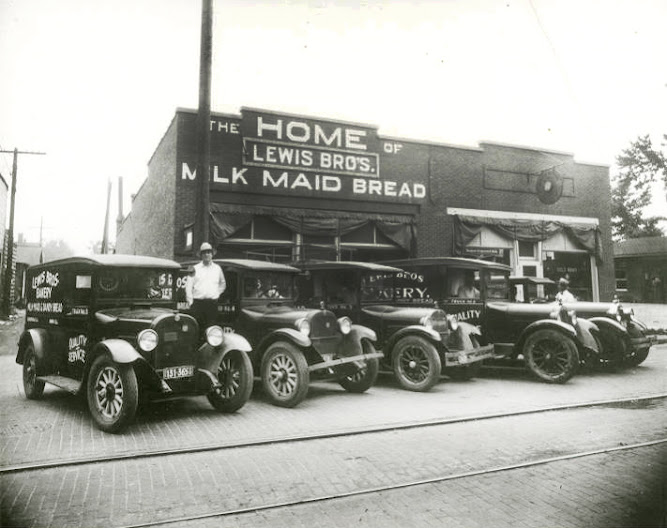 In June 1929, Lewis Brothers moved to 200 North Main Street and renamed it "Sunlit Bakery." The bread was named "Butternut."
More new equipment was installed in this plant. It consisted of two peel ovens, one new mixer, new flour equipment and an automatic bread wrapper for unsliced bread.

In 1930, sliced bread came into the picture. The loaves were sliced on an old-style meat slicer, packed in trays, and wrapped in wax paper. In 1933 they bought their first bread slicer with an automatic wrapper.
A new loaf of bread was added to the production line, called "Big Boy" in 1937. They bought more delivery trucks, and the number of new employees increased again.
In 1941, Lewis Bros. purchased the building from A.A. Crowell, which needed considerable remodeling.
On May 8, 1944, A.C. Lewis, general manager, died after a long illness. The business was reorganized, with Jewel and Charles Lewis owning the building and brother Jack Lewis becoming owner and operator of the bakery.
In 1947, the company was incorporated with R. Jack Lewis, President Charles Lewis, Vice President; Josephine Lewis, Secretary and Treasurer. More new equipment was added as were new employees, now up to fifty. The weekly bread production reached 75,000 loaves.
The picture of the rabbit going on bread wrappers was purchased.
They decided they were ready to enter new territory with their latest equipment. In 1950 purchased a site and built a building in Harrisburg, Illinois, opening five new delivery routes, making a total of 17 Southern Illinois routes.
Four Classic Bunny Bread TV Commercials from the 1950s.
"Bunny" became so popular and well known throughout the entire territory that consumers began calling for "Bunny Bread." Bunny Bread was trademarked, and they decided to use it on all Lewis Brothers Bakery products.
Outgrowing the product capacity of their current location, Lewis Brothers purchased a site for a new plant at Illinois 146 (Vienna Street) & U.S. 51 at Anna's eastern city limits. Work began on the new building in April 1951 and opened in February 1952.
The Lewis Bros. threw a Gala for the Grand Opening of the new Bunny Bread Bakery. Over 35,000 people from Southern Illinois and southeastern Missouri attended three days of festivities.
Several new delivery routes opened in 1952, and production reached an all-time high.

The Lewis Bros. purchased the distribution rights to Kirchhoff Bakery (est.1873), Paducah, Kentucky, on January 1, 1953. The purchase opened the Kentucky Territory with routes changing to area-based, using multiple trucks per one of twelve delivery regions. (speedier delivery)
In the early 1970s, after more than 45 years in Illinois, Lewis Bakeries headquarters migrated to 500 North Fulton Avenue, Evansville, Indiana.
By this time, Bunny Bread was being sold throughout the Midwest, and the Indiana facility was a central location. In 1986, a second Indiana facility focused on producing sweet goods opened in Vincennes.
R.J., Jr. continued to grow and expand the company's Midwestern sales throughout the 1970s and 1980s and developed new lines of modern baked goods. In 1987, the bakery became the first in the country to remove trans fats from its products. In 1991, they began selling the first fat-free, reduced-calorie bread on the market, then introduced a line of low-carb products in 2000. Lewis Bakeries was also innovative in developing half-package sizes of their best-selling products.
While their beloved Bunny Bread brand remains a customer favorite, the company's product line includes the Hartford Farms and Gateway brands. They have a hand in several well-known national products, acting as a wholesale distributor of the Sunbeam, Sun-Maid, and Roman Meal brands.
Lewis Bakeries is one of few independent bakeries left in the Midwest. It's also the largest wholesale bakery in Indiana, with annual sales exceeding $265 million. Lewis Bakeries remains a family-operated business in its fourth generation and continues to run operations from its Evansville headquarters.
Compiled by Dr. Neil Gale, Ph.D.
Contributor, Mary Giorgio, Orangebean
Presented by Dr. Neil Gale, Ph.D. at 8/02/2022 12:19:00 PM