On Friday night, March 26, 1961, surgeons removed the right arm and both legs of Charlene Frazer, 23, and both legs of Martha Jackson, 26, from a bomb explosion in the basement of a popular Chicago tavern.

The Jukebox was blaring something called "Nutville," and a score (20) or more merrymakers were dancing in the HI-FI Tavern at 943 North Wells Street, at Walton Street, Chicago, when the explosion happened. Dozens more were in booths or on bar stools sipping drinks.
NUTVILLE — with Billy Cobham - Horace Silver
Bill Hardman - Bennie Maupin - John Williams
Mary Petty, 24, whose father, George, 54, owns the place, said she was behind the bar when "suddenly, there was a terrible noise, and the lights and music went out." People were hurled into the walls, and the bomb in the basement blasted a 15-foot diameter hole in the tavern's floor upstairs. The first floor is a 30 by 50-foot tavern floor upstairs. People were rescued from the basement.
Miss Leona Thames, who lives at 947 North Wells Street, said she was thrown from her chair as she watched television. She said clouds of smoke were pouring from the tavern when she looked out. The second deputy fire marshal John Scanian said no fire followed the blast.
Ambulances and Squadrols[1] began removing the injured to nearby hospitals. The fire department sounded an extra alarm, and police blocked off the area from spectators and cleared traffic for emergency vehicles.
One of the victims, Cyrus Leatherman, 34, of 923 North Sedgwick Street, was questioned by police in Wesley Memorial Hospital, said:

"I was dancing when the whole floor just came right up. I went clear to the ceiling and I thought I was going to remain hanging there. It was the craziest rock 'n' roll I ever danced."

Edward Neville, the detonation expert of the police bomb squad, said the explosion apparently occured in the basement of the three-story brick building. Neville said it positively was a bomb.
Captan Robert Thomsen said an outside basement door had been forced open before the blast, and it had been wired shut, but the wire was cut with a sharp instrument.
The first 12 people removed were taken to Henrotin hospital. The following 22 were sent to Wesley  Memorial hospital, five were taken to Passavant hospital, and one was sent to Grant hospital.
There were only three uninjured people in the tavern: the owner's daughter, Miss Mary Petty, and the two bartenders, Sylvester Green and Clarence Bell. They were shielded from the effects of the blast by the bar, which remained intact.
The concussion threw people in the apartments above the tavern from beds and chairs, but none were injured. No one on the street was hurt by the blast. 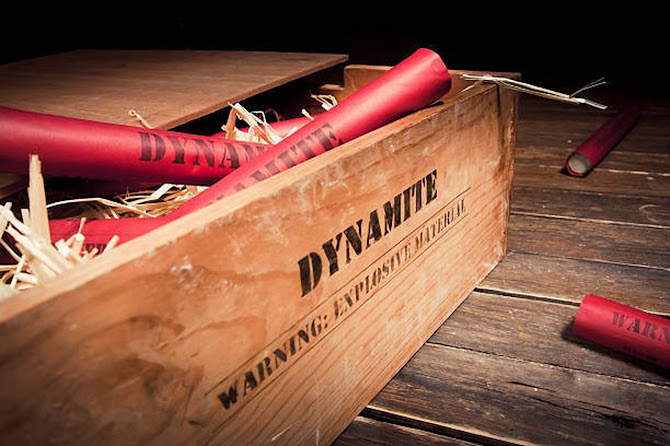