Forrestville was a Hamlet (a small human settlement), founded in the 1850s, that had a somewhat indefinite boundary, like many other suburban villages. It is in today's Grand Boulevard community.
It may be said at first to have been bounded as follows: Forty-third Street, Cottage Grove Avenue, Fortyseventh Street and Indiana Avenue. 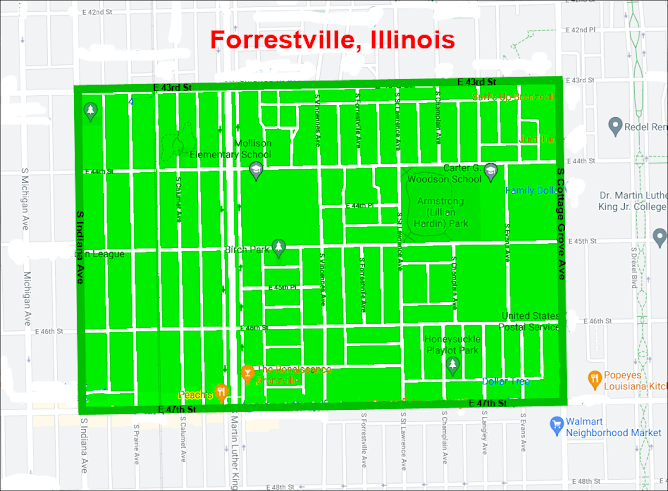 Forrestville was in what was known as District № 7, which was taken from District № 2, in May 1873.
A school of thirty-seven pupils was organized on May 19, 1873, in Miss Alice J. Quiner's house on Forty-fifth Street. In September 1873, Miss Alice Draper became principal, and Miss Quiner remained as the assistant. Nearly fifty children were in attendance within less than a year.

The Springer school, built in 1873, became an important educational institution. In 1874 the school was moved to Cottage Grove Avenue, between forty-fourth and forty-fifth Streets. In 1875 the school was moved once again to the corner of forty-fifth Street and St. Lawrence Avenue. The Oak Ridge school was in the vicinity of Forty-seventh Street and Cottage Grove Avenue, but children attended from as far south as Sixty-third Street and as far west as Indiana Avenue.
Compiled by Dr. Neil Gale, Ph.D.
Presented by Dr. Neil Gale, Ph.D. at 9:35 PM

Email ThisBlogThis!Share to TwitterShare to FacebookShare to Pinterest
Living History of Illinois and Chicago® Chicago, Lost Towns of Illinois, Maps and Plats