Abraham Lincoln owned two parcels of land in the state of Iowa but never visited either one. He received these tracts from the U.S. government for service as an Illinois volunteer in the Black Hawk War of 1832. It was not until the 1850s that Congress authorized land bounties to the war veterans. Lincoln received 40 acres following the act of September 28, 1850, and 120 acres after the act of March 3, 1855.
Lincoln could accept land from any U.S. land office, but instead of choosing sites in his home state of Illinois, he selected Iowa farmland as advised by Clifton H. Moore, an Illinois legal colleague who owned property in Tama and Crawford Counties. Moore acted as Lincoln's representative and paid his real estate taxes. Lincoln owned the land until his death in 1865 when it went to his widow and two surviving sons. There is no record that the land produced an income for the Lincolns. The land passed out of the family many years ago but is actively farmed today, producing traditional row crops such as corn and soybeans. 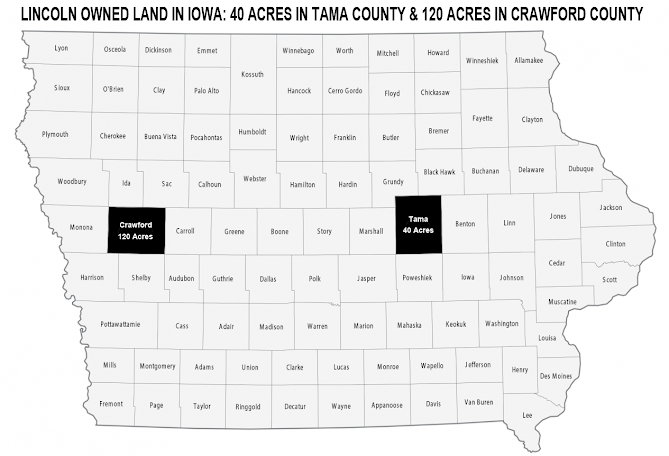 Tama County Land
The first parcel Lincoln received was 40 acres in Howard Township in Tama County. The warrant was issued to him on April 16, 1852. Two years later, Moore entered the land through John P. Davis of Dubuque, and the patent was dated June 1, 1855. After President Lincoln died, the interest in the property was divided evenly among his heirs.
In 1867 Clifton Moore wrote to Lincoln's son Robert, saying he had seen the land and its value was $10 per acre. On April 6, 1874, Mary Todd Lincoln deeded her interest in it to her son Robert for $100. Later that year, Robert and his wife sold the land to Adam Brecht for $500 ($12,000 today). The land was not recorded until June 15, 1916. 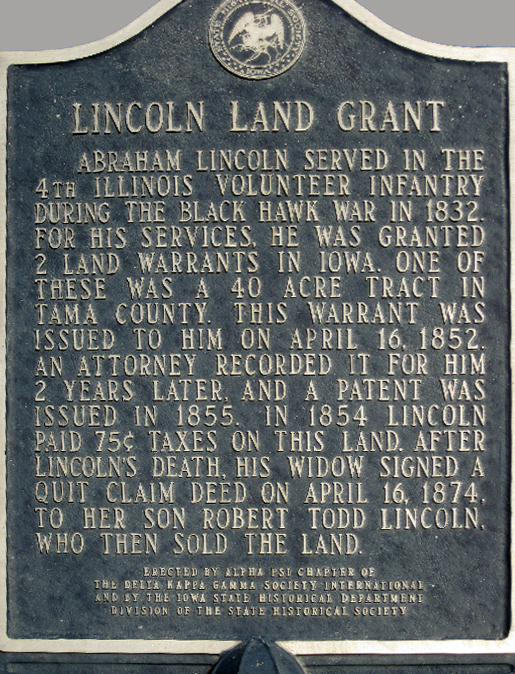 Crawford County Land
Lincoln's second parcel was 120 acres in Goodrich Township, Crawford County. It is seven miles north of Denison and one mile east of Schleswig, identified by a marker erected in 1923 by the Denison Chapter of the Daughters of the American Revolution (DAR) Warrant #68645 was issued on April 22, 1856, and Lincoln located the land while living in Springfield, Illinois, on December 27, 1859.
The patent for the Crawford County tract was issued to Lincoln on September 10, 1860, during his first presidential campaign, and sent to the Registrar of the Land Office at Springfield on October 30, one week before the election. The property eventually passed to Lincoln's only surviving son Robert, who sold the property to Henry Edwards for $1,300 ($38,800 today) on March 22, 1892.
By Abraham Lincoln Online
Edited by Dr. Neil Gale, Ph.D.
Presented by Dr. Neil Gale, Ph.D. at 8/11/2021 06:58:00 PM