Abraham Lincoln and Ann Rutledge
An Old Salem Romance
The story of the love of Abraham Lincoln for Ann Rutledge and the overwhelming grief of Lincoln when Ann died was told by William H. Herndon in 1866 and afterward. His story has been confirmed by all the early biographers and by nearly all the leading writers on the life of Lincoln since that time. 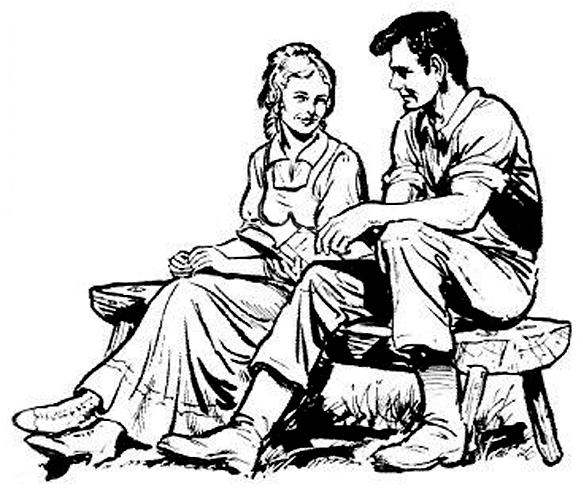 A BIT ABOUT ANN RUTLEDGE
Ann Mayes Rutledge was born near Henderson, Kentucky, on January 7, 1813. Ann was 3 of 10 children born to Mary Ann Miller Rutledge and James Rutledge. In 1829, her father, along with John M. Cameron, founded New Salem, Illinois.
The story goes that Ann Rutledge was engaged to marry John MacNamar, a dubious character who left for New York and promised to marry her upon his return. Ann was eighteen years old when Abraham Lincoln arrived in New Salem late in July 1831. Rutledge and Lincoln met after this and supposedly fell in love. While MacNamar was away Ann promised to marry Lincoln after MacNamar released her from their betrothal. For a time Rutledge and MacNamar exchanged letters, but his letters became more formal and "less ardent in turn" and eventually ceased completely. MacNamar never returned before her death.
Many of the facts of her life are lost to history, but many historians believe that she was the first love of Abraham Lincoln. The exact nature of the Lincoln–Rutledge relationship has been debated by historians and non-historians since 1865.
In 1835, a wave of typhoid hit the town of New Salem. Ann Rutledge died at the age of 22 on August 25, 1835.
WILLIAM H. HERNDON LECTURE, 1866
"Abraham Lincoln loved Miss Ann Rutledge with all his soul, mind, and strength. She loved him as dearly, tenderly, and affectionately. They seemed made in heaven for each other, though opposite in many things."
Herndon states in the same lecture that after Ann's death:

"He sorrowed and grieved, rambled over the hills and through the forests, day and night. He suffered and bore it for a while like a great man—a philosopher. He slept not, he ate not, joyed not. This he did until his body became emaciated and weak, and gave way.
... In his imagination he muttered words to her he loved ... Love, future happiness, death, sorrow, grief and pure and perfect despair, the want of sleep, the want of food, a cracked and aching heart, and intense thought, soon worked a partial wreck of body and of mind ...
"Did this dread calamity, of which I have spoken, crush him and thus modify, if it did not change, his nature? ... He got well and bade adieu, for a short season, to Bolin's kind roof and generous hospitality. Mrs. Bolin Green still lives, etc."

Neither Marsh nor anyone else in New Salem anticipated that Lincoln would be incapacitated for business, and he was not incapacitated. A few days after he had franked the Marsh letter, Lincoln surveyed a piece of land that Mr. Marsh had purchased from Bowlin Green. The survey is in the Barrett collection. Lincoln made the survey carefully, drew the plat accurately, computed the tract's area with a clear mind, and wrote it all down in a firm hand.
On November tenth of the same year, he wrote a remarkably discriminating letter to Governor Duncan, asking a recommendation which was his right as a member of the Legislature, and from December 7, 1835, till January 8, 1836, he was back in Vandalia attending to his duties as a member of the Legislature. And not a single soul in New Salem or Vandalia made any record then or for decades afterward that Abraham Lincoln had gone crazy over the death of Ann Rutledge.
If Lincoln needed any other cure than work and politics for such despondency as he had over Ann Rutledge in the fall of 1835, he probably had it. The best cure known to medical science for hypochondria is malaria. To burn with fever one day and sit on the next with chattering teeth is to take one's mind off all his other troubles. And when he recovers from malaria, he is likely to be thankful enough for that recovery to forget that he ever worried about anything else. In the fall of 1835, Lincoln had chills and fever. We are not certain that he needed this cure, but he had it.
We are greatly indebted to Lincoln's third and last law partner, William H. Herndon, for his invaluable knowledge of Abraham Lincoln. We also have somewhat against him on the score of prejudice and bad taste. After the death of Lincoln, he was accustomed to going to Petersburg when the court was in session there and pick up a few cases. He boarded with his brother-in-law, whose name was Miles. He had to pay only for what he drank ...
It has been assumed by most if not all writers on the romance of Abraham Lincoln and Ann Rutledge that if she had lived, she and Abraham Lincoln would have married and lived happily ever after. Herndon himself thought that and believed that such a match would have been unfortunate for Abraham Lincoln. He was by nature an indolent man, loving ease and unmolested comfort. If he had had a tenderly affectionate wife, free from outbursts of passion, making home alluringly comfortable, Abraham Lincoln might have yielded to her seductive charm, have become a well domesticated and uxorious husband, and never have gone far in political life.
Herndon thought it well that Ann did not live to make Lincoln as affectionate a wife as she would probably have made him ...
We do not know what would have happened if Ann Rutledge had lived. But as Herndon has set the example by telling us that her love would have ruined Abraham Lincoln by making him a too affectionate and attentive wife, we, knowing almost nothing about her, may now safely rest our conjectures on our knowledge of Abraham Lincoln.
Rev. William E. Barton, D.D.
Sunset Lake
Foxboro, Massachusetts
November 15, 1930
Dear Mr. Rennick:
I thank you for your letter of invitation. I regret that I shall not be able to attend your meeting. But you may count me in hearted sympathy with the movement.
You are at liberty to quote the portion of the Chapter in The Women Lincoln Loved submitting the same to my publisher Bobbs-Merrill Co. I will gladly accept any arrangement which they deem right.
Yours very truly,
(Signed) Wm. E. Barton.

Email ThisBlogThis!Share to TwitterShare to FacebookShare to Pinterest
Living History of Illinois and Chicago® Abraham Lincoln, Famous, Women of Influence