The History of the Morton House Restaurant that was in Morton Grove, Illinois.

The Morton House, formerly the "St. Cloud House," at Miller's Mill, had been thoroughly renovated and refurnished in 1869. They offered room and board for $5 per week and $6  suites. The area attracted Roadhouses, pickle farms, and rose gardens.
The Morton House opened in October 1869 as a stagecoach stop and grocery. The Chicago, Milwaukee, and St. Paul Railroad track was laid through what would become the Village of Morton Grove in 1872. The whistle-stop (later station) at what had been Miller's Mill was named Morton Grove to honor one of the railroad's New York financiers, Levi Parsons Morton, who became the 22nd vice president of the United States from 1889 to 1893 for President Benjamin Harrison. Morton Grove became well known as a stagecoach stop. The village formally incorporated as Morton Grove on December 24, 1895.
The little frame building grew with the railroad, adding more rooms. It had become a tradition with the Morton House, (on today's Lincoln Avenue at Lehigh, just south of Dempster), that when the Milwaukee Road train would approach the crossing near the restaurant, the bartender would rush out with his lantern, signal the train to a stop and serve the engineer a beer. The practice was continued for years until the high-speed modern trains made it impossible.

Thru the years it has been an Inn, a country store, and an ice cream parlor. In 1936 it was purchased by Emil and Otis Dohl and converted into a popular family-type restaurant, serving German and American Fare.

The original frame house, a then landmark in the northwest suburban community for more than half a century burned down in 1953. It was rebuilt and enlarged, opening on December 4, 1954. 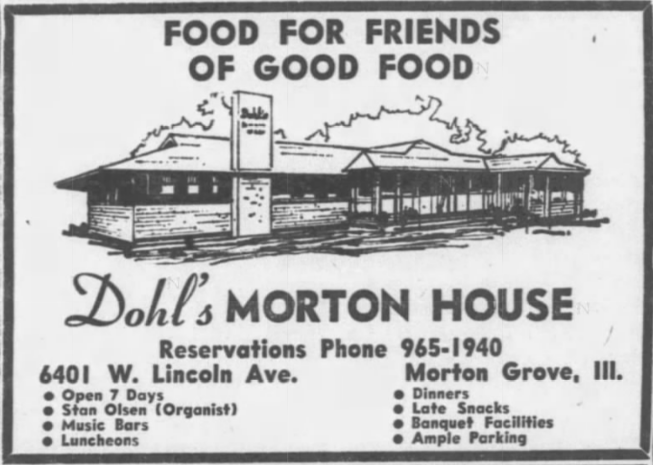 The dining rooms just seem to go on and on. There are 3 rooms that seat about 25 people, each on the main floor. These could be closed into smaller spaces or opened up to accommodate a large crown. They were completely private for parties. Downstair was the warm and attractive Anchorage room, complete with a bar that could accommodate up to 125 persons. The main dining room could seat 275 diners.

Hoffman's Morton House became famous for its tableside Chateaubriand service.
The 1973–1975 recession differed from many previous recessions where high unemployment and high inflation existed simultaneously and took about 5 years to recover. Restaurant operators began cutting corners to try to keep prices down. At the Morton House, it was soup or salad, not soup and salad. 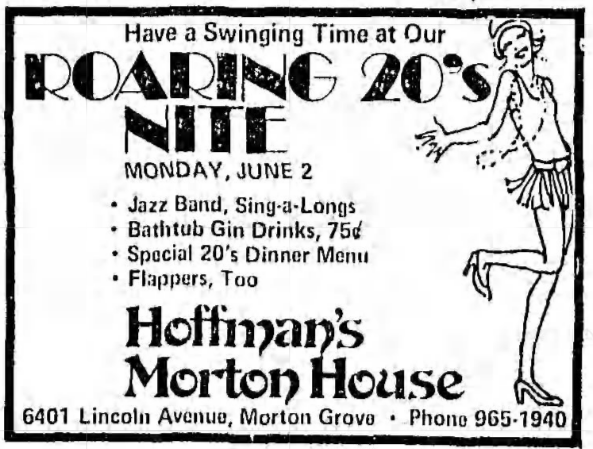 Hoffman's Morton House, hosted the Fourth Annual Morton Grove Oktoberfest on September 17, 18, 19, and 24, 25, 26, of 1976. The flexible walls of a giant tent adjoining Hoffman's Morton House will shake with the nightly musical performances, Yodelers, sing-alongs, dancing, and more.
Howard Hoffman died at St. Francis Hospital in Evanston on July 17, 1985.
The restaurant property sold and the equipment and fixtures are auctioned off on March 7, 1991. It's the end of a 122-year legacy. 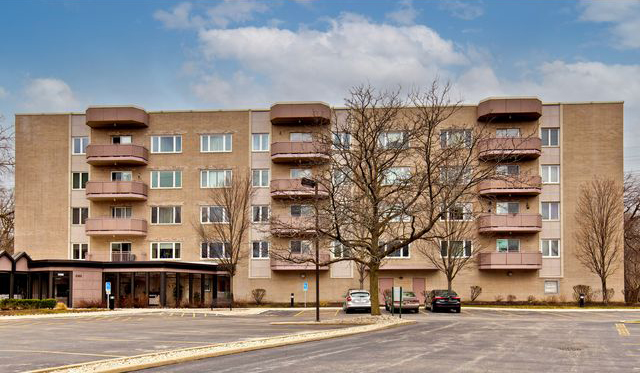