This is an immense edifice is but in keeping with the greatness of all things to which the enterprise and energy of Chicago are applied. This building is named the “Hough House,” in compliment to Colonel Rosell M. Hough, one of the pioneers in the cattle and packing trade of Chicago. It is built of cream-colored bricks and in the very best style of modern hotel architecture. It cost $125,000 ($3,653,200 today) and was finished in 1854. It was leased by W. F. Tucker and Co., the popular proprietor of Briggs House, and by them furnished throughout. Its external dimensions are,130 feet front by 144 feet deep; it is six stories high and is located on the north-east quarter of the Stock Yard grounds. Burling and Baumann of Chicago, are the architects.
To those approaching or leaving the city, this immense building is a surprise. For miles, it is the only thing that breaks the expansive view over the prairies, and it is only when it is reached that the discovery is made that it is one of the necessary incidents of the Stock Yards. It is a comfortable and commodious house and is not too large for the business which is now rapidly increasing. The view from the cupola of the hotel is remarkably fine, commanding a view of the lake, the city, and the boundless prairie to the south.
The hotel is supplied with water from a well dug in the courtyard. At a depth of forty-five feet, a layer of rock was struck, and five feet below that water was obtained. This water rises in the well to within ten feet of the surface, and, as is supposed, to the level of the lake, from which it is evidently supplied. It is therefore inexhaustible. The water is forced into a tank upon the top of the building and is thus distributed through the various rooms..
The new six-story hotel was named the Hough House in 1854 in honor of Colonel Rosell M. Hough, founder of the Chicago Union Stock Yards. The hotel contained an exchange, bank, eating saloon, telegraph rooms, brokers’ offices, etc. It was later it was renamed the Transit House.
CHICAGO HOTEL IS GUTTED.
Chicago, January 5, 1912. — The Transit House, a six-story brick hotel and restaurant at the Union Stock Yards was badly damaged by fire this afternoon. The flames started while the hotel, which is a gathering place for stockmen from all parts of the country, was crowded with guests.
It was reported that a number of girls in the servant's quarters on the top floor of the burning building were trapped. Firemen who raised ladders rescued some of the women but were said to have been driven back by the flames before all who were cut off from the stairs had been carried to safety. 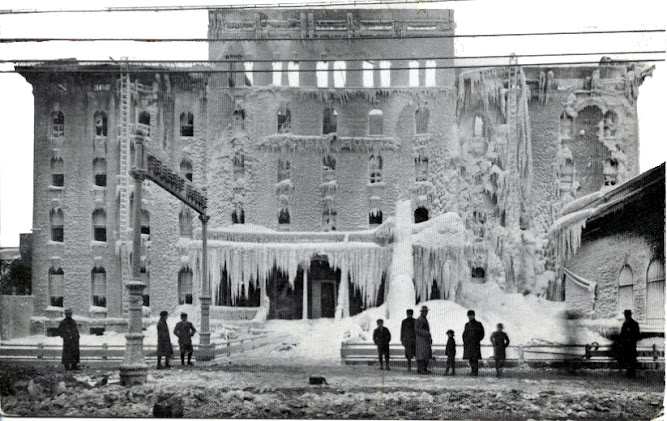 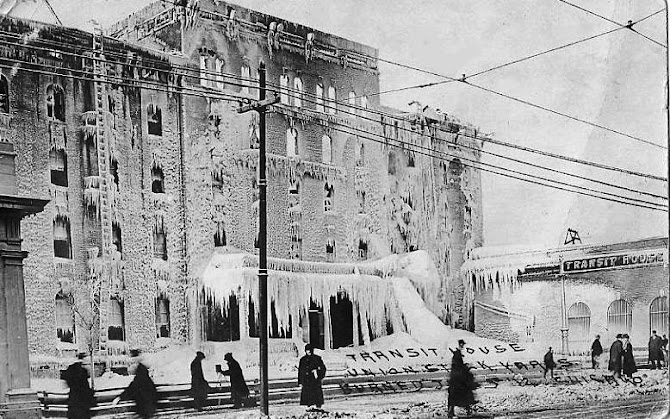 Later it was declared that all those on the upper floors had been rescued. Many of the guests had exciting escapes. A livestock commission merchant and his wife were so benumbed by the cold that they could not descend the fire escapes and were carried to the ground by firemen. At 2 o'clock the firemen declared that the flames were under control.
BATTALION CHIEF LACEY REPORTS

“The building, which was located on Forty-second and Halsted Streets, was 200×150 feet in dimensions, built of brick and wood, six stories high and about 46 years old. The outside walls were brick and there were no partition walls except those which divided the various rooms. The fire started in the kitchen at 10:07 p. m. and was stopped in the south wing after it had burned about twenty-four hours. An alarm was sent in by a Snap Register Watch Service and responded to by 35 engines and four truck companies. The hotel was equipped with a few house lines and chemical extinguishers and outside fire escapes, which enabled the 50 odd employees to make a successful escape. When the firemen reached the scene the flames were burning in the south wing from basement to roof. With 25,000 feet of hose laid and 40 single and double hydrants available, the department kept 35 streams at work until the flames were completely under control."

THE STOCK YARD INN
The Stock Yard Inn was erected in 1912 immediately after the Transit House fire at Halsted and Root Streets (now Exchange Avenue {41st Street}), right by the International Amphitheater. It had 175 comfortable rooms and a number of meeting halls, public and private dining rooms including the Saddle and Sirloin Club. It was designed originally for the accommodation of stockmen having business in the Chicago market—the world's largest center of livestock trade. It was of authentic Tudor architecture, rated the finest example of that type of construction in the Midwest.

The Stock Yard Inn was intimately associated with America's livestock industry. Here the men who do the spade-work that puts meat on the tables of America have foregathered over the years to enjoy each other's society, to consummate fabulous trades, and to participate in the finest cuisine known from coast to coast.
Guests at the Stock Yard Inn included presidents Roosevelt, Coolidge, Hoover, Truman, Eisenhower, and Kennedy. During the 1968 Democratic National Convention, held in the Amphitheater, the Inn was a center of political wheeling and dealing. The Inn also played host to other prominent and distinguished people from the U.S. and other countries—particularly Great Britain and Canada, Argentina, Brazil, Mexico, South Africa, Australia, and New Zealand.
The Stock Yard Inn's last improvement was the Sirloin Room Restaurant where diners would select their own steaks, tableside, and brand their initials into the meat with a hot iron. It was one of Chicago's finest dining rooms. Quality of service was its pride.
But when the Stockyards were closed in 1971, it marked the beginning of the end for the Stock Yard Inn. Unable to attract significant business, the Stock Yard Inn was demolished in January 1977.
Compiled by Dr. Neil Gale, Ph.D.

[1] Colonel Rosell M. Hough, after the Civil War, Colonel Hough was elected the first president of the Chicago Chamber of Commerce in 1864, and served as a founder of the Chicago Union Stock Yards, and supervised its construction until it opened in June of 1865.