The name "Bookbinder" comes from Samuel Bookbinder, a Jewish immigrant from the Netherlands who opened the "Old Original Bookbinder Restaurant" in 1893 in Philadelphia, Pennsylvania. The original soup is a variety of turtle soup made with typical stew vegetables such as tomatoes, carrots, celery, bell peppers, onions, leeks, mushrooms, and garlic. It is made with common snapping turtle meat.

Many had said that the Drake Hotel's Bookbinder's soup was more delectable than that served at the famous Bookbinder's Restaurant in Philadelphia.

But it was the same recipe. Master Chef Marshall Jr. of the Drake Hotel's Cape Cod Room and Camellia House Restaurants said he "I tried unsuccessfully to wangle the recipe from the owner of Bookbinders. I got it, tho, by taking the chef out for a drink!"
Bookbinder's soup was a staple at the Drake Hotel's Cape Cod Room which closed for good on December 31, 2016. Following is the recipe as provided by the Master Chef of the Drake Hotel:
BOOKBINDER'S SNAPPING TURTLE OR RED SNAPPER SOUP RECIPE
Following are two sets of ingredients with respective preparations. Note, the directions are written verbatim, per the Cape Cod Room. (Makes 15 cups or about 8 average bowls) 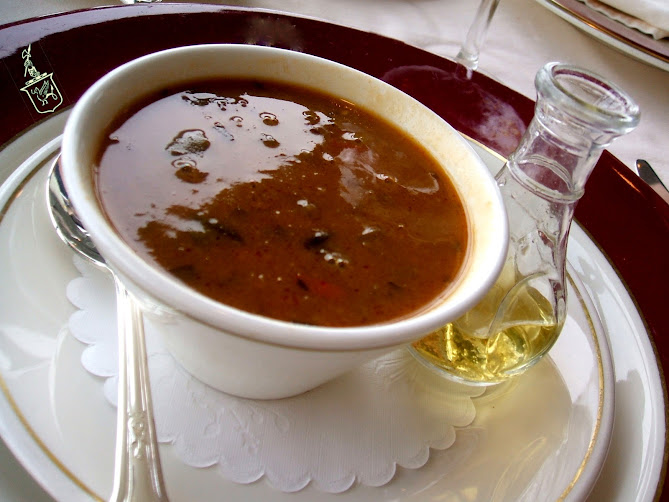