The History of James Varnum Gale from Ogle County, Illinois. Not to be confused with his Brother, John V. Gale.

Born in Concord, New Hampshire on November 2, 1806, the son of Benjamin and Prudence (Varnum) Gale; his father was a man of considerable prominence in his state and is closely identified with its early history. James, a retired merchant, lived to eighty-seven years old.
James received his preliminary education in local schools. In 1824, he entered the United States Military Academy at West Point, where he remained for about a year. In 1827 he moved to Boston, where he was engaged as a clerk in a store on Rowes' Wharf, Boston. In 1831 James started his own mercantile business until 1835 when he sold his interest.
He was married in April of 1832, to Caroline Gibson, of New Hampshire, and had two daughters, the only survivors of several children; Mary Jane and Frances.
James moved to Illinois, and in May of 1835, located in Ogle County, and erected the first log cabin at today's South 5th and Madison Streets, the site of the original Ruby Nash School, which was built in 1896 and sold to the Oregon Park District in 1983.
He farmed his homestead until 1848 when the town had grown considerably, he embarked in a mercantile business with a partner, which they ran very successfully about four years. Retiring from active mercantile pursuits they sold their establishment. James erected a sawmill. 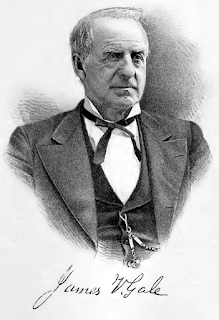 James V. Gale was the oldest living resident of Oregon, and held many responsible positions; he was the first Recorder of Ogle County and held that office eleven years. James was also the first Justice of the Peace (elected in 1836), and the first Public Administrator. He was the Supervisor for the Oregon Township from 1853 to 1854 and also from 1858 to 1868. James was the second Postmaster of Oregon, being appointed by President Harrison in 1841, holding the office two years but was removed from that office on account of politics by not being a "Tyler" man (defecting to another party or political position while in office).
James was elected by the Republican party of his district to represent them in the Illinois House of Representatives in 1863. The Old Settlers' Association met for the first time on February 10, 1869, electing John Phelps as President, James V. Gale as Secretary, and William J Mix as Treasurer. Their first annual meeting was held on May 27, 1869, in the Court House at Oregon.
Oregon became an incorporated city in 1870 and James was elected its first Mayor, serving in that capacity two years; in the same year, he was elected a Director of the Chicago and Iowa Railway Company and was subsequently elected Vice President of the Company. He was also a Director of the First National Bank of Oregon and their Vice President.
James was known to keep a journal noting the important events transpiring during that time period in Oregon and Ogle County history. James V. Gale is buried at Riverside Cemetery in Oregon, Ogle County, Illinois.
History of Ogle County, Illinois, Published 1878.
Edited by Neil Gale, Ph.D.
Presented by Dr. Neil Gale, Ph.D. at 10/09/2020 01:03:00 AM