Paying Homage to Restaurateur Burt Katz; The Inferno, Gullivers, Pequod's and Burt's Place. He is the "Father of the Caramelized Pan Pizza Crust."

THE DIFFERENCE BETWEEN PAN PIZZA AND DEEP-DISH PIZZA
There are many Chicagoland pizza joints that make their pizza pies with the tomato sauce either on the bottom or the top of their Deep-Dish or Pan pizzas. How the restaurant layers the topping makes no difference and is usually proprietary to the restaurant or chain. It's up to the Pizzaiolo (Italian: pizza maker), to be consistent.

BURTON "BURT" D. KATZ
Bert Katz (1937-2016) was born in Chicago’s Wicker Park neighborhood. Burt attended Roosevelt High School in Chicago's Albany Park neighborhood. He served in the U.S. Marine Corps and studied history at Roosevelt University. Bert spent 25 years, on and off, as a pit-trader at the Chicago Board of Trade.

On December 6, 1962, Burt and Sharon started a year-long, around-the-world honeymoon road trip in Japan. They bought a rare Toyopet Stout truck, an original Toyota, then drove through several countries including Pakistan, Iran, and Afghanistan. Photographs show the then 24 and 25-year-olds with their truck, on which they stenciled their many stops. In Lisbon, they shipped the truck to Chicago, but never drove it again. Katz donated it to a friend’s auto museum which closed and sold it for scrap. When the salvage yard owner saw the stenciled country names, he could not bear to crush the truck, so again it sold. 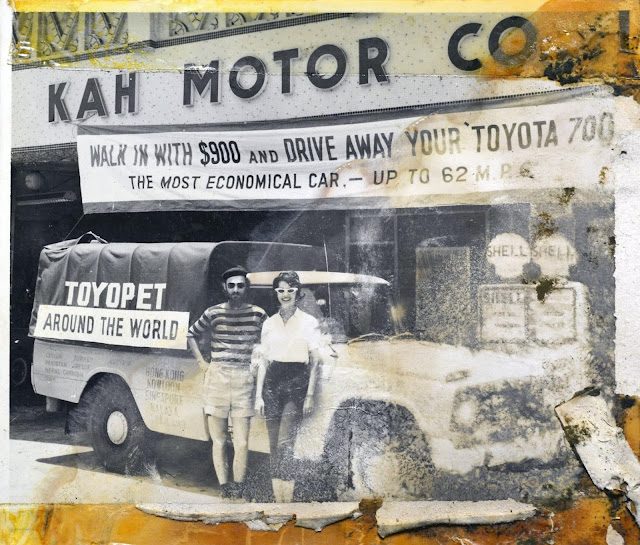 In 1963 Katz became an owner-partner in the pizza restaurant called The Inferno on Central Street in Evanston, a north suburb of Chicago. For the first time, Katz introduced a new kind of pizza to the Chicago area consumers, a caramelized crust. The Inferno was the first place he would eventually fully own, but it would be far from the last.

He sold his share in 1965 and opened up Gullivers, a pan-pizza Restaurant, with partner Jerry Freeman. Katz named it as a tribute to “Gulliver’s Travels.” His original Gullivers Restaurant only had one dining room and was flanked by a pottery shop and a delicatessen in the same building. It's still located at 2727 West Howard Street in Chicago’s West Ridge community. Freeman developed a passion for antiques and filled the restaurant with stained glass lamps, statues, and other items. The two soon split up. Katz would go on to sell Gullivers and enter into the business world and he would not emerge into the pizza industry again until 1970. 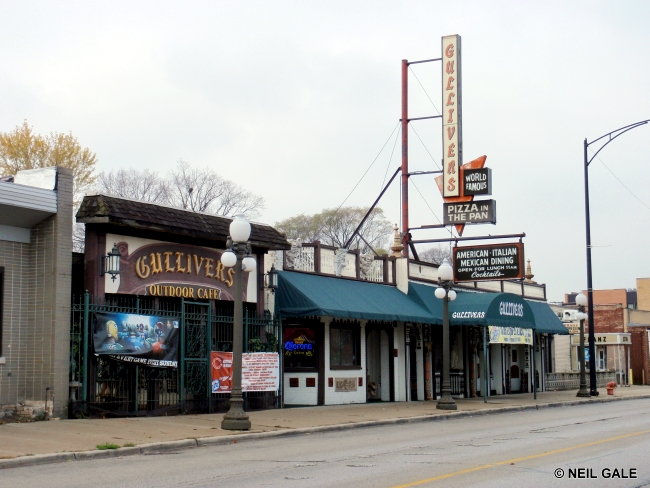 In 1970 Burt Katz decided he didn't enjoy the futures trading business any longer. After a confrontation with his boss, he quit his job He still needed a job to support his wife Sharon and three children.

So, turning back to the pizza industry and the unique caramelized pizza he had created years before, he opened the original Pequod's Pizzeria at 8520 Fernald Avenue in Morton Grove in 1971 (their menu and website incorrectly say 1970), a north-west suburb of Chicago. He named it Pequod's after the whaling ship in “Moby Dick.” The original restaurant is still located at 8520 Fernald Avenue, in a converted house. Its original logo was just a whale, although it has since been modified to be a whale wearing a thong on his head.

Katz sold Pequod's in 1986 to Keith Jackson who still owns the restaurant. Katz simply says he got 'burned out' at Pequods, but of course, he couldn't stop.

Always changing his pan pizza (said 'PAN PIZZA' on every restaurant menu) recipe from place to place, Katz finally opened up Burt’s Place in suburb Morton Grove, which he operated with his wife Sharon. The pizza at each establishment that Burt had left his caramelized recipe which was different at each place.

THE PEQUOD'S PIZZERIA IN MORTON GROVE, ILLINOIS.
I was first introduced to Pequod's in Morton Grove, by a friend who took me there in 1975. It is just off of Lincoln Avenue at the alley at 8520 Fernald Avenue. Burt was always in the kitchen but would step out into the dining room to see if he knew anyone! 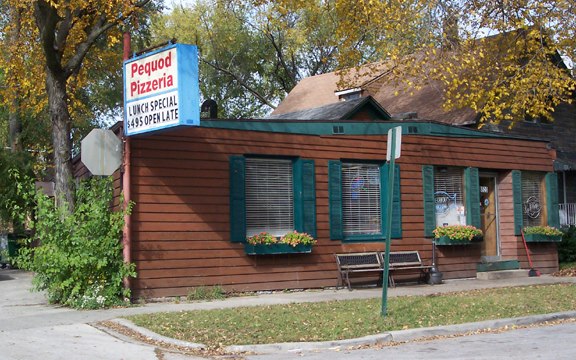 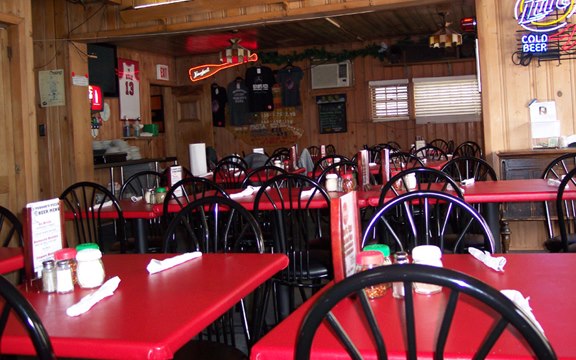 Burt, a radio collector, filled the interior with beautiful vintage console radios, table-top radios, microphones, ham radios, and the QSL postcards of people’s ham radio call letters stapled to the ceiling beams. There was a backroom filled with Burt's most precious items of his collection. Not many people were invited by Bert to see his radio collection.
One of those QSL cards was from a friend of mine. His call letters were: WB9VLV
Burt added cheese between the edge crust and the hot pan when placing the pie back into the oven after turning it 180° to finish baking. This is what gives the edge of the crust its burnt look and delicious taste. 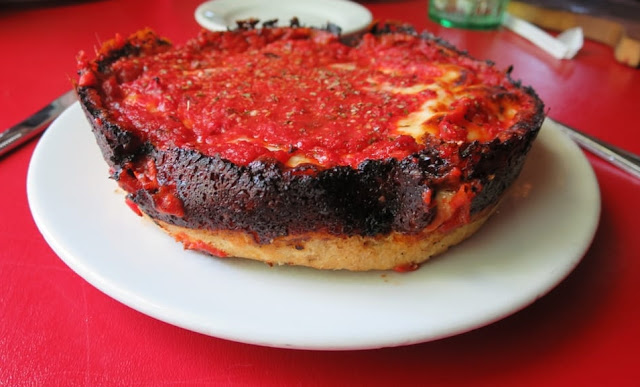 Bert took the aged pizza pans from Gullivers when he sold it in 1965, so by the time he opened Burt's Place in 1989, the seasoned pans were almost 25 years old.
Pequod's pan pizza is to die for. I personally rank it higher than Giordano's, The Original Gino's, Gino's East, Lou Malnati's, Uno's, and, yes, even Burt's Place.

Pequod's is a great informal, cozy date-place, and the greatest pan pizza anywhere. I took a girlfriend there, her first time, in 1976. She absolutely loved their pizza. We went back shortly thereafter. We were seated at the 2-topper table at the front window. While waiting for our salad and pizza order, I commented about how cool it would be to live across the street in one of those houses. You could call in your order, go across the street to pick up your order and bring home a scorching hot pizza. 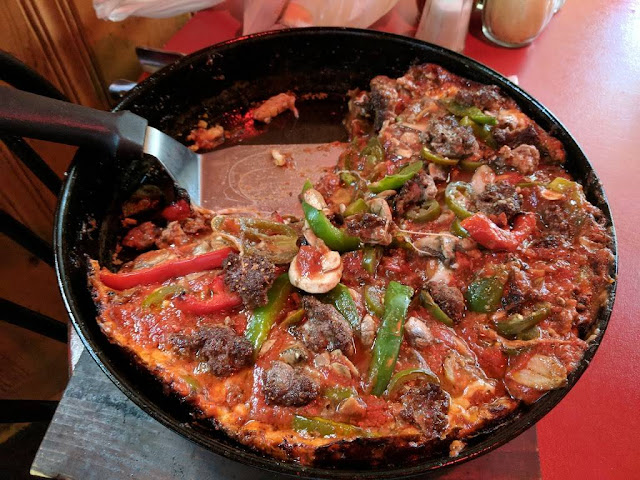 Well.. just as I finished my statement, the front door of the house directly across the street opened, and a man crossed the street and came into Pequod's, picked up his order, and went home with it. We nearly got kicked out of the restaurant because we were laughing so hard tears were rolling down our cheeks. Truth be told, we were a little loud too. The waitress came to our table and I managed to tell her why were couldn't stop laughing. She chuckled and explained that it happens a lot from the neighborhood residences. 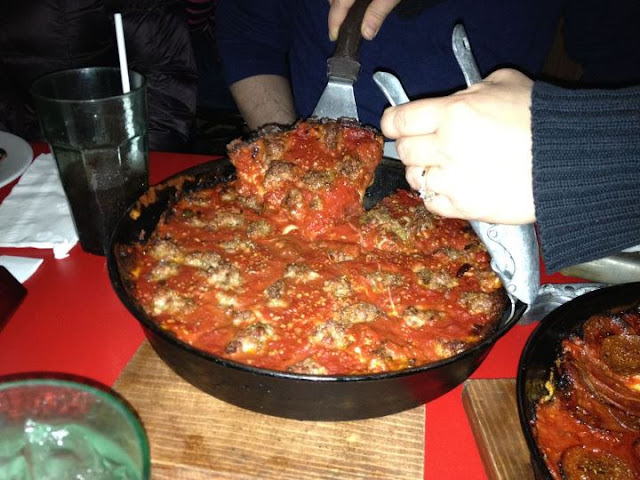 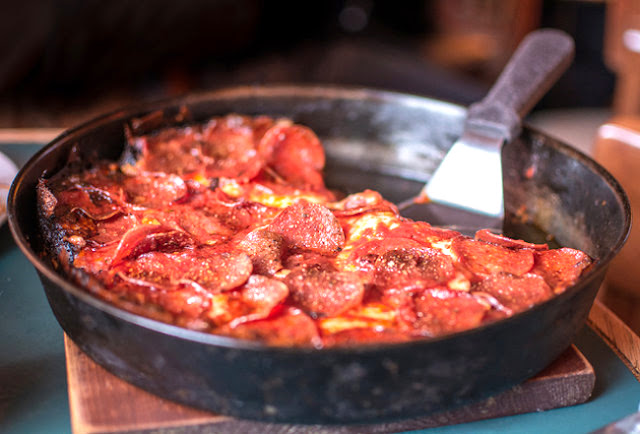 If you've ever been to the Morton Grove Pequod's, before Katz sold it in 1986, and used the tiny, and I mean TINY, restrooms that, at least the men's room, had the walls painted black and bathroom humor phrases and words were painted in different colors on the walls, and not from customers or taggers. The restroom doors were slatted both the upper and lower half of the door and angled down so you couldn't see inside. Sometimes you could hear someone expelling gas, making grunting noises, or hear tinkling sounds. Creepy... but as soon as someone started to laugh... nobody could stop.

When the two-way swinging kitchen doors opened, viewable from only one or two tables in the back, you could see {new} women's undies, bras, and panties, hanging from the ceiling. No lie! 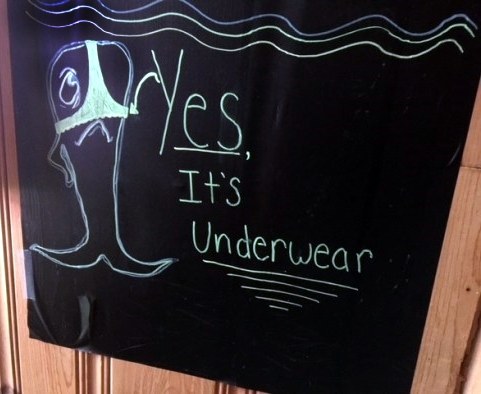 BERT'S PLACE IN MORTON GROVE.
In 1989 Burt and Sharon Katz opened the restaurant "Starback" at 8541 Ferris Avenue in Morton Grove, which was renamed "Burt's Place" a number of years later because of a trademark conflict with Starbucks. 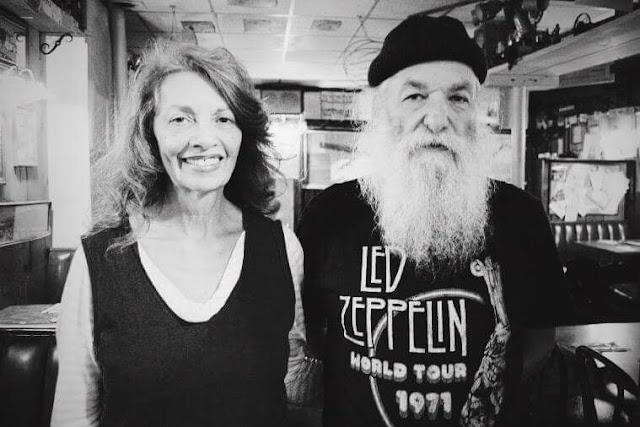 Burt was the sole operator in the kitchen, while Sharon was the only waitress, phone-order taker, and front-end manager." Burt believed if you want something done right, do it yourself, and he did.

A photograph of a slice of pizza from Burt's Place was featured on the cover of the October 2007 issue of the magazine Saveur with an accompanying article; a huge reprint of the cover was displayed on the wall next to the kitchen entrance. 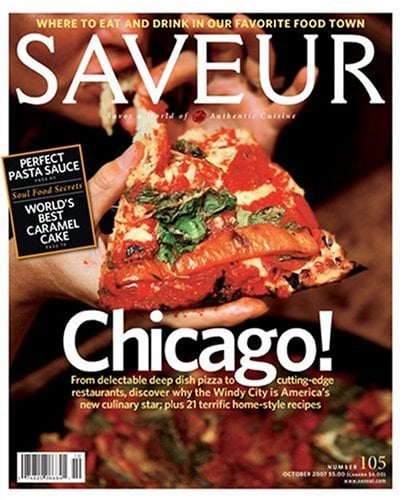 He achieved worldwide fame after being featured on a Chicago-themed episode of Anthony Bourdain's television documentary series "No Reservations" in 2009.

Anthony Bourdain's "No Reservations"
on the Travel Channel.

In 2012, based upon a survey involving 85,000 votes, the editors of the magazine Men's Health selected Burt's Place as the USA's Best Pizza Parlor.

Burton D. Katz died on April 30, 2016. Burt was survived by his wife Sharon, their three children, and six grandchildren; he was predeceased by one grandchild. Burt Katz is buried at Waldheim Cemetery in Forest Park, Illinois.
Remembering Burt Katz: The Pizza Show

In 2017 Burt's Place was reopened by Jerry Petrow and John Munao, former futures traders and first-time restaurateurs, who were selected and trained by Burt Katz when he knew he was dying of cancer. Petrow said he wrote down everything Bert told him from memory.

Petrow and Munao used the same fresh ingredients (shopped for every day), recipes, methods, and the pizza pans that Katz left them. "There were some rumors out that we weren't using the same pans," Munao said. "That is false."
The entrance had a small ramp installed because it was necessary to comply with the Americans With Disabilities Act, as are the two newly designed restrooms to become ADA compliant.

John Munao ventured out on his own, taking Burt Katz's caramelized pizza crust secret, and opened Lefty's Pizza Kitchen in Wilmette in 2018. The pizzas are a New York style with the crust being double thin in thickness or as Chicagoans call it, Eastern Style.

THE PEQUOD'S RESTAURANT IN THE LINCOLN PARK COMMUNITY OF CHICAGO.
Keith Jackson bought Pequod's in Morton Grove in 1986 from Katz for about $300,000 (per the Cook County Assessor's Office). Jackson said the sale price was for the business as well as the building.

Jackson would go on to buy the building in Chicago's Lincoln Park in 1991 to open the second Pequod's Pizza at 2207 N. Clybourn Avenue. 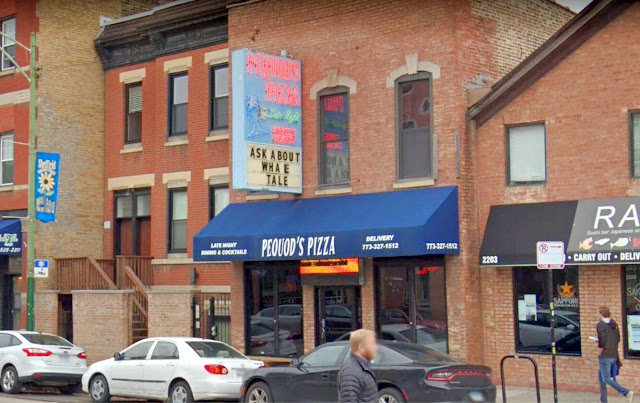 When asked if there was any bad blood between himself and Burt Katz, Jackson, a radiant 60-year-old with blue eyes and a peace and love mentality, merely said “let bygones be bygones.” Jackson did add however that it was “disappointing that he opened up Burt’s Place right up the street from our Morton Grove location.” Jackson understands that it’s a competitive business and despite this fact, his business does very well, especially in the booming Lincoln Park community.