Uncle Andy’s Cow Palace was at the northeast corner of Quentin Road and Baldwin Road (Northwest Highway - Rt.14) in Palatine, has an interesting history.

The land was originally owned by Elisha Pratt. It was sold to Edwin Converse whose family farmed it for over fifty years. Jack Deynzer purchased the farm in 1941 and five years later opened up a restaurant and cocktail lounge called the Radio Club Farm. Jack brought in mules for donkey baseball games to promote his new beverage, the “Moscow Mule.” Jack sold out in 1952 and the business became known variously as Paul Peterson’s Supper Club, Grier’s Supper Club, and Evergreen Supper Club. An owner Oscar Craig was charged in 1958 with manslaughter in the death of manager Lverman H. Key.

In 1964 Tom Speropulos and brothers Jim and George Bozikis purchased what was then known as Campbell’s Hearthstone and renamed it Uncle Andy’s Cow Palace. Uncle Andy was Andy Sellas who provided financial backing and encouragement. The Cow Palace featured many acts such as Jane Hyde, The Four Imperials, Joe Harris, and Bill LaBrose & his Orchestra. 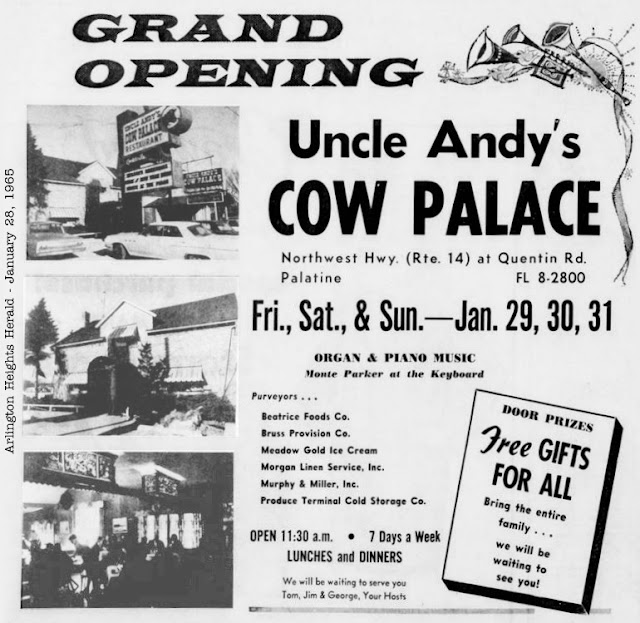 In 1967 the owners installed a large statue of a cow and ran a contest to name it; “Andy’s Belle” won. When owner Tom Speropulos died in 1968, new management took over. John Bakos brought in fresh entertainment such as The Grecian Airs, The Volumes, The Tony Scott Trio and assorted belly dancers. Uncle Andy’s Cow Palace was succeeded by the La Romana Restaurant in 1978.

The building burned down in 1981 and was replaced in 1987 by the Quentin Corners shopping center. The name Quentin Corners originally referred to a tiny community at Quentin Road and Rand Road.
INDEX TO MY ILLINOIS AND CHICAGO FOOD & RESTAURANT ARTICLES.