Captain Paul Boyton came to Chicago in 1886 to give an exhibition of swimming feats and aquatic tricks at Cheltenham Beach, 79th Street and the lake, the site of Chicago's first amusement park. The Cheltenham Beach (renamed "Rainbow Beach" after WWI) venture failed after only one season, but Boyton, having seen Chicago, returned to settle here two years later.

Chicago's 1893 World's Columbian Exposition became the first world's fair to feature a separate amusement zone - the mile-long - Midway Plaisance. The Midway's gathering of diverse amusements in a single enclosure with an admission charge established the essential concept of the amusement park. Every fair and carnival since has had its own Midway. 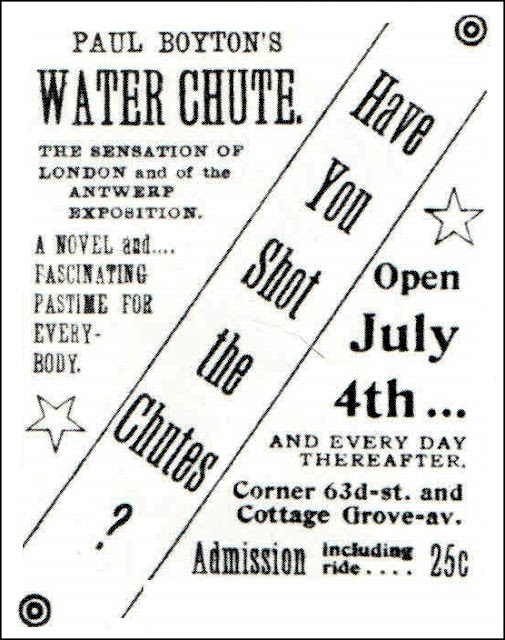 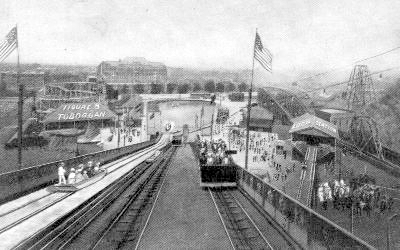 Its success led the Captain to open another park, "Sea Lion Park," at Coney Island in Brooklyn, New York, (it would later become Luna Park), a top entertainment spot, in 1895. Later, he franchised his Water Chutes Parks in San Francisco, Boston, and Philadelphia. 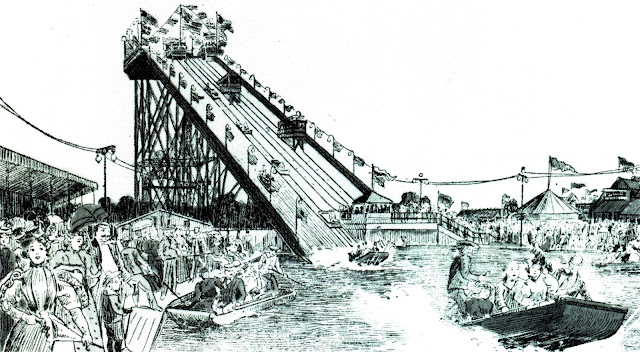 Boyton's enterprise inspired George C. Tilyou, owner of various amusements then scattered all about Coney's beachfront to open the island's second park, Steeplechase, in 1897. By that time, Chicago had a second park; George Ferris had moved his giant wheel to its own park on North Clark Street calling it “Ferris Wheel Park.”

The amusement park idea spread rapidly across America in the next decade. At its peak, Coney Island had three major amusement parks; Chicago, in that same period, boasted no less than five. 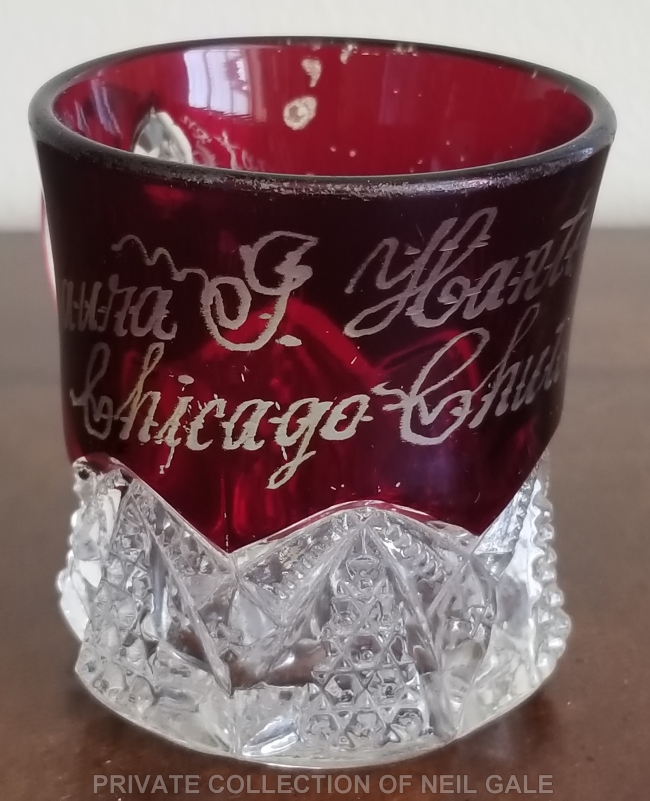 Paul Boyton's Chutes Park was permanently closed in 1907. In 1907 the legal fight against the traction [streetcar] barons had the public demanding the consolidation of the city's streetcar lines. The Chicago Union Traction Company was ordered to dissolved and its north and west side properties were foreclosed on. One of these properties was Chutes Park's location.

It was, really, the only thing that could have killed the park, despite competition from newer parks like Riverview and White City. Chutes was still a moneymaker. Daily admissions ran as high as $28,000 to $30,000 ($825,000 daily today). In the 13 years that Chutes Park was in business, they paid out more than 500% in dividends (avg. 38.4615% per year) to its stockholders.

On April 22, 1908, the last remaining rides and fixtures of the park Paul Boyton had started were sold at auction. The Chicago Railways Company, which had foreclosed on the land, built trolly car barns on the site. Today it is still occupied by Chicago Railways' successor, the Chicago Transit Authority (CTA).

When it went out of business in 1908, Chutes park president Charles R. Frances was granted the concession to build Riverview Park's colossal Shoot-the-Chutes ride.