Early settlers named the area’s first post office for President James Monroe. The name "Monroe" was already in use in another community in Illinois that was named Monroe, so they decided to honor President Thomas Jefferson instead.

The State formed the Township of Jefferson in Cook County, Illinois in 1850. When the township was founded, Chicago (population 30,000) was still a walkable urban area contained within a radius of a couple of miles. By 1855, the village had 50 buildings. On August 6, 1872, they change from the township organization to the village organization. 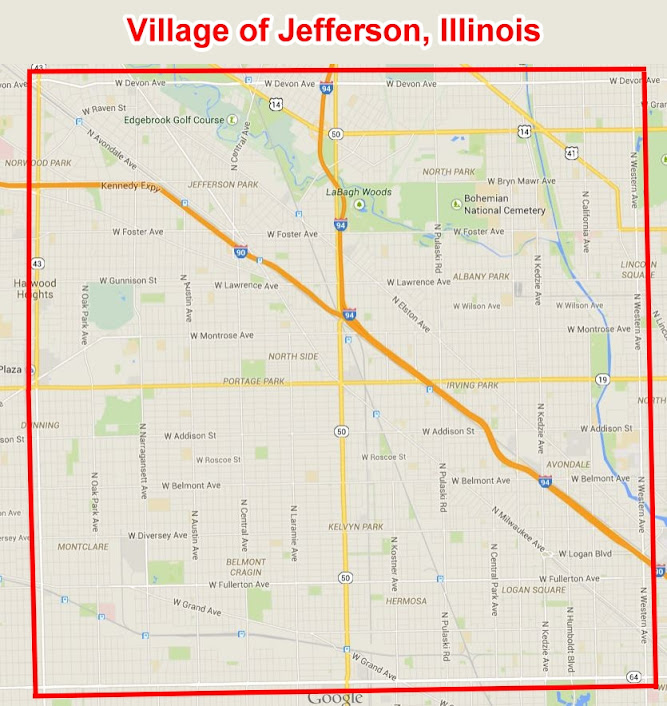 This region comprised most of what is now known as Chicago's Northwest Side including the entirety of the following community areas: Jefferson Park, Avondale, Logan Square, Hermosa, Forest Glen, Dunning, Albany Park, Portage Park, Irving Park, Montclare, and Belmont-Cragin.

In 1889 the Village of Jefferson was annexed into the city of Chicago. Its borders were Devon Avenue on the north, Harlem Avenue on the west, Western Avenue to the east, and North Avenue to the south. It proved to be Chicago's largest single annexation with the addition of 125 square miles of property and 225,000 additional people.

By the year of annexation, Jefferson had become active and prosperous. The Jefferson settlement was linked to the city of Chicago by the Milwaukee and Elston Plank Roads, both of which had been in operation since the 1850s. These roads had initially been Indian Trails, and they were later called the “Upper” (Milwaukee) and “Lower” (Elston) roads.  Elston got its name from Dan Elston, a former alderman, and bricklayer who graded, maintained, and principally used the road. Both Milwaukee and Elston became toll roads owned by Amos Snell, and they operated until the annexation (tolls were necessary on planked roads to cover the costs of repair and maintenance). At that time, citizens burned down the toll gates in protest of first, having to pay the tolls and indignation over the extreme increase in traffic.

Chicago Tribune, Thursday, February 9, 1888
Amos J. Snell, the West Side millionaire, was shot dead early yesterday morning by burglars in his residence, at the northwest corner of Washinton Boulevard and Ada Street. The murder was committed shortly after 2 o'clock in the morning.

The murder of Amos J. Snell has never been solved.