Lillian Honeywell Beall from Iroquois County, Illinois, at 22 years old, was the youngest college professor in the United States.

Mrs. Lillian Honeywell Beall was born March 31, 1864, in Iroquois County, Illinois. She received a good education in the local schools but realizing that she deserved a more extended course.

She heard of the fame of Hedding College (1855-1927) in Knox County, Illinois, and she entered that institute as a student in 1881. She graduated in 1884 at 20 years old with the highest honors in her class. While in school, she won 1st prize in an oratory competition.
Beall returned to Hoopeston, Illinois, to become the assistant principal for Hoopeston High School. She held that position for two years before returning to Hedding College to work as a math professor. Her name went unchallenged through the leading educational papers as the youngest college professor in the United States.
Her fame as a teacher extended over more than Hedding College's territory. She was in receipt of offers of professorships in other prominent institutions. All of these were refused. In 1889 she resigned her position, although assured by the leading trustees of the institution that her salary would be advanced and guaranteed.
She was united in marriage in 1889 to Rev. Thomas Allen Beall. In June 1888, she was elected to fill her old chair of Mathematics at Hedding College. In addition to her duties in the classroom, she was the acting preceptress (a woman who is an instructor; teacher) of the college during the illness of Mrs. Evans. She is very highly thought of as a lady and a Professor of Mathematics, and she commands the highest respect of all with whom she is acquainted. 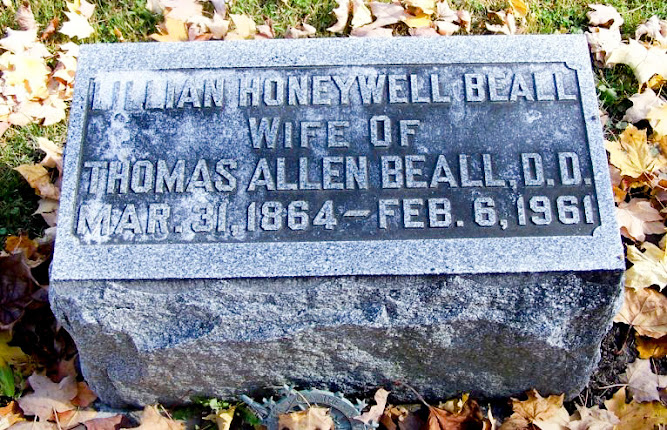 Dear Dr. Gale,
My name is Amy (Koch) Schwartz and I am the youngest of Lillian Honeywell Beall's great-granddaughters.
My mother (Hazel Beall Koch) always referred to Lillian as "Mom Beall."  She was one of two grandmothers who helped raise my Mom and her two sisters after the death of their mother.  My Mom was only 5 weeks old when her mother died of an infection on Christmas Day, 1923. "Mom Beall" homeschooled the two older sisters during the three years she helped care for the family. As a result of "Mom Beall," one of the three girls pushed ahead in school and graduated early!
Sincerely,
Amy Schwartz

My article, "Lillian Honeywell Beall, at 22 years old, was the youngest college professor in the United States," was printed, with permission, in their Summer 2019 Newsletter, Volume 53, Issue 2, of the Iroquois County Historical Society. "I hope you enjoy reading our newsletter, and thank you again for sharing your information."