On Sam Leone's four-mile stretch of Chicago's Touhy beach, lifeguards made more than 10,000 rescues during his 40-year career.

In 1925 a young lifeguard at Clarendon Beach—then the crown jewel of Chicago's beaches—impressed his bosses with his watchful eyes and dramatic rescues, soon earning a promotion to beach director. There was a catch: Instead of going back to Clarendon, the lifeguard would be transferred to Rogers Park Beach, a scraggly, broken-up four-mile stretch centered at Touhy Avenue, with a loosely organized lifeguard crew and a spotty safety record.

The lifeguard, 25-year-old Sam Leone, made the most of his opportunity. During the next 40 years, until his death in 1965, he improved lifesaving methods; whipped his 75-man lifeguard crew into a tough, alert and well-trained unit; developed a corps of "junior guards" into one of the city's biggest and best recreational programs; and racked up one of the best safety records at any beach, anywhere. Along the way, Leone took on the role of second father to thousands of Rogers Park youngsters and earned the reputation as Chicago's greatest lifeguard.

"When Sam came around, it was like God walking into the place," says Joe Pecoraro, the Chicago Park District's recently retired superintendent of beaches and pools, who, as a young lifeguard, first knew Leone in the 1950s. "Sam was one of the best beach people in the world."

Hundreds of former lifeguards and junior guards gathered on the 100th anniversary of Leone's birth in 1900 to honor his life, work, and reputation. Appropriately, the gathering took place at his old headquarters at Touhy Avenue and the lake, which was renamed Leone Beach in his honor.

In that summer of 1925, the new director of the Rogers Park Beach decided that some changes were needed in the name of safety. Leone quickly became one of the most ardent and effective backers of defensive lifeguarding. "It used to be that our job was to go down after the bodies," he once said. "Now we practice what we call preventive work."
Leone's rules were simple: Lifeguards showed up on time and stayed until their shifts were over. They didn't leave their posts unless they were relieved. If one swimmer entered the lake, the lifeguard launched his rowboat and watched from a mobile position in the water. Guards could never talk to girls. They paid constant attention to everyone on their beaches, especially the youngest children and the piers, drop-offs, and other dangerous spots. "I'm a real Simon Legree in training them," Leone told the Chicago Tribune in 1943, "but lifeguarding is a tough job and it's a job that has to be done right." 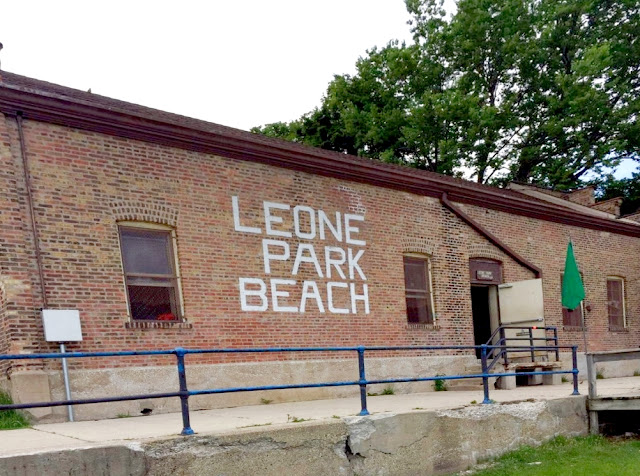 The hot-tempered Leone demanded excellence from his guards and he got it. Although he stood only 5'8", Leone, who had been a fleet boxing champion during World War I, could beat the stuffing out of men 50 pounds heavier and 20 years younger. When a lifeguard got out of line, Leone would invite him into the beach's little gym for a "boxing lesson." The threat alone was usually enough to keep his troops in line, but 1930s junior guard Scotty MacLagan witnessed at least one unhappy recipient of Leone's form of discipline. "It took me a long time to get to like Sam after I saw that," MacLagan says.

In 1940, Leone fired two guards for a drowning that happened on their beach at 4 a.m., long before they were on duty. After they pleaded their case, Leone relented and rehired them.

"But that's a little scary for a kid just out of high school, to get fired for something that happened when I wasn't even there," says one of the guards, George Doscher, a retiree living in Lombard.

"Sam Leone was the Vince Lombardi of lifeguarding," says 1940s junior guard and 1950s lifeguard Ed Kahn, a retired chemical company executive living in Burr Ridge. "There was no-nonsense and there was no arguing. Just his look was enough to make grown men wilt."

Leone's leadership-by-intimidation wouldn't fly today, but no one could argue with his results. During his 40-year tenure, only seven drownings occurred on his four-mile stretch of beach, while his guards made more than 10,000 rescues, a safety record believed to be unmatched anywhere.

Leone's lifeguards were the first in Chicago to use two-way radios for emergency communication, a portable resuscitator for rescue breathing, a diving helmet and early versions of scuba. Leone's favorite innovation, however, was using a motorboat.

His pride and joy was the 'Alert', a 22-footer that he salvaged and rebuilt in 1930. The Alert was known as the fastest boat on the lakefront, hitting a top speed over 50 m.p.h. Just as important, Leone had designed it to take a pounding from the waves.

In 1956, a faster boat came along: the Prowler, a 28-footer out of Wilmette. The Prowler was useless in the waves, but on a flat day, it could beat the Alert head-on. "Sam did not take this lying down," remembers then-lifeguard Jim Miller, now chairman of Murphy & Miller, a Chicago-based air-conditioning distributor. Leone took the Alert back into the beach's workshop, acquired a more powerful engine and modified the body to better handle the extra speed. "Three weeks later, the boat's back on the water," Miller recalls. "It was once again the fastest thing on Lake Michigan."

Leone always hammered into his lifeguards the need to be watchful, and he took that lesson seriously himself. By 1950, the Tribune estimated, Leone had personally saved more than 500 people. But his most-publicized rescue—though he would have preferred less publicity on this one—took place on Jan. 24, 1940. A neighbor phoned the beach to report a man clinging to an ice floe, and Leone launched a rowboat to investigate. He returned several minutes later with the victim, a very cold and wet Doberman pinscher, who gave Leone's face a big, slobbery lick just as they reached shore, to the delight of the reporters who had gathered. "That made the papers in Europe and all over the United States," remembers Leone's daughter, Carla Billings, who now lives in San Diego. "That's where Sam got internationally famous."

When Leone arrived at Touhy Beach in 1925, he inherited a loosely organized group of about 20 kids between ages 6 and 16 called "junior guards." These young people helped watch the beach during the pre-season and on hot, busy weekends. In exchange, the junior guards got T-shirts and the right to play with rowboats and other equipment as they prepared to become lifeguards themselves.

Leone and his longtime assistant, Fran Conway, soon came up with bigger plans for the junior guards. They kept the juniors on beach patrol part of the time, but also set up a wide range of activities: swimming and rowing lessons, softball and football games, lifesaving and artificial respiration classes, picnics on the beach, rides in the Alert and many others.

Through the years, Leone and his program won over the hearts of the beach's neighbors. By 1948, the Rogers Park News declared, "Almost every youngster in the neighborhood knows the Rogers Park Beach director as a second father."

Dozens of "Sam's boys," now in their 50s and 60s, still feel that way. "You always wanted to please him," remembers 1940s junior guard Dick Shiman, a longtime teacher and swimming coach at Loyola Academy in Wilmette. "If you were at the chin-up bar and Sam happened to walk by, you'd want him to see that you could do 10 pull-ups. Almost as if he were your dad—you'd say, `Hey, Sam, watch me.'"

On June 26, 1954, Leone and his guards made one of their greatest rescues, saving dozens of lives without even getting wet.

Around 9:30 on that Saturday morning, Leone surveyed the beach. It was shaping up to be a sunny, hot day—a big improvement from the violent thunderstorm that had passed a couple of hours earlier. Despite the peaceful scene, he quickly realized that something was wrong: The sand stretched out 50 to 100 feet farther than the normal water line, and watermarks on the piers showed the lake level had dropped six feet or more.

Within minutes, Leone and his lifeguards cleared about 150 swimmers and sunbathers off the beach. Then the lake came rushing back in an eight-foot wave, covering the athletic fields at neighboring Loyola Park and sucking two 500-pound lifeguard towers into the water like matchsticks. By recognizing the phenomenon known as a seiche, Leone and his crew may have saved dozens of lives.

The "Great Seiche of 1954" killed eight people at Montrose and North Avenue Beaches. Soon after it hit, Leone and several of his guards headed down to Montrose in the Alert to dive for bodies. They retrieved several victims in that first practical use of scuba for search and recovery in the Chicago area.

As Leone aged, he showed no signs of decline, except for his hearing. By 1950 he was about three-quarters deaf, from years of lake swimming and working with noisy motors.

Leone learned to read lips fairly well, but phones presented a problem. He rigged up a second extension on the beach phone, on which a co-worker could listen. "Every word that the caller said, I would repeat; Sam would read my lips, and he would answer on the other phone," beach custodian Tony Rizzo remembers. "He fooled many people into thinking that he got his hearing back."

But he didn't fool everyone. Lifeguard Allen Hyman, now a Miami-based risk management director, remembers fielding a phone call from Mayor Richard J. Daley in the early 1960s. "The mayor called and said, `As long as I am mayor, you'll never have to worry about losing your job,' " Hyman recalls. "Sam said, `Thanks, I appreciate that.' Then the mayor said, `How the hell are you hearing me? You're deaf!' and Sam had to give it away."

Leone planned to retire from the beaches at age 65, after the summer of 1965. But his doctor found lung cancer that year while treating a fractured rib. Leone steadily declined over the summer and died on October 8, 1965. The following year, Touhy Beach was rededicated as Sam J. Leone Park and Beach—the only Chicago park named for a lifeguard.
Perhaps the more fitting tribute, however, has been the continued success of the Leone Beach junior guard program. With more than 300 kids—both boys and girls—the program continues to thrive, with the same types of activities that Leone put in place 94 years ago. 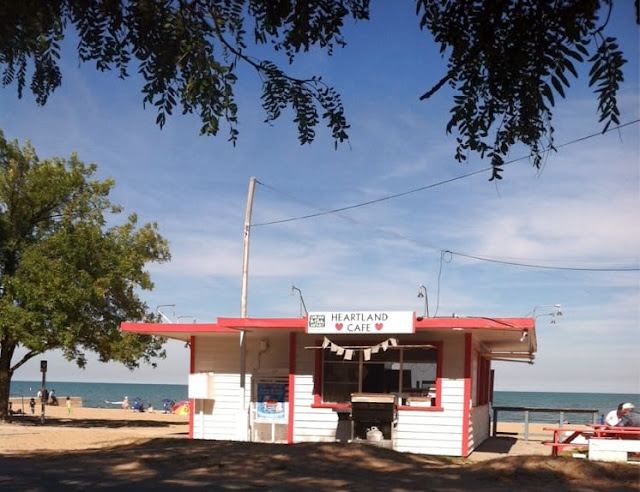 The philosophy of the program has changed little since Leone's day. "We try to make the kids see a part of life they otherwise might not become acquainted with," Leone told the Tribune in 1964. "The leadership they show is very gratifying. I teach them, and they come right back and do a better job running activities than I could do."

You see regular kids start thinking of themselves as something special and that can really change their lives.