Marshall Field's Famous Frango Mints, the Myth and Back Story.

The story, as told: "Frango Mints candy was originally a product of the Frederick and Nelson Co. department stores in Seattle, Washington. The chocolates were first known as Franco Mints—for FRederick And Nelson COmpany. During the 1920s, when Marshall Field bought those Seattle stores, they acquired Franco Mints as well. And the name stayed that way until 1939 when Spain’s General Francisco Franco became a controversial figure. Field’s then changed the name to Frango Mints."

When Macy’s purchased Marshall Field's, they began selling the candy in what was supposed to be a copy of the original 1929 Marshall Field’s candy gift box. The trouble was, that box clearly identified the candy as “Frango Mints.” Was Macy's engaging in historical revisionism?

After some research, it was found that the Franco-to-Frango story was wrong.

Frederick and Nelson had trademarked its candy as “Frango Mints” on June 1, 1918. It is said that name was a portmanteau for FRederick And Nelson GOodness. Generations of Field’s employees had been unknowingly passing down this false tale.

So unless someone comes up with an old box or advertisement for “Franco” Mints, another urban legend has been debunked.


Note: Originally, "Frango" was the name for a frozen dessert sold at the sophisticated Tea Room at Frederick & Nelson's department store at Sixth Avenue and Pine Street in Seattle, Washington. The first Frango frozen dessert was available in maple and orange flavors.

In 1926, the consistency of the Frango Dessert was described as flaky, requiring the use of a fork, not a spoon, as you would use with ice cream. The Frango name eventually was extended to ice-cream sodas, pies, and milkshakes sold at the store. It wasn't until 1927 that Ray Alden, who ran Frederick's in-store candy kitchen, developed the Frango mint meltaway chocolate. 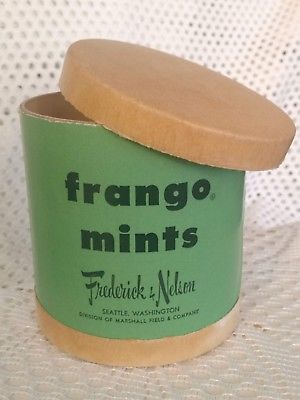 Alden's secret recipe used chocolate made from both African and South American cocoa beans as well as triple-distilled oil of Oregon peppermint and 40% local butter.
A few months after Marshall Field's agreed to buy out Frederick & Nelson's and take control of the Seattle company in 1929, the Frederick & Nelson candy makers in Seattle were summoned to Chicago to introduce Frango mints to Marshall Field's to help build slumping sales during the Great Depression. Soon, the candy kitchen at Marshall Field's had produced its own Midwestern interpretation of the Frango Chocolate recipe.
Although the Northwest version still uses the original Frederick & Nelson recipe, the Marshall Field's recipe has been modified a few times. This and the use of different ingredients and equipment would account for any difference in taste between the two versions. 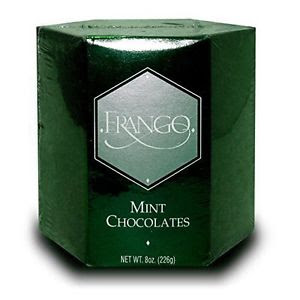 The Midwest version had been produced on the 13th floor of the Marshall Field's flagship State Street store from 1929 until March 1999. However, demand for the chocolates overwhelmed the in-house facility; consequently, then corporate owner Dayton-Hudson Corp. handed over the production contract for Frangos to Gertrude Hawk Chocolates in Dunmore, Pennsylvania, and closed the Field's candy kitchen, letting go virtually all of the candy kitchen's employees. This infuriated many Chicagoans and enraged Chicago Mayor Richard M. Daley, who sought to have the iconic chocolates made by a local Chicago company.
Garrett Brands (Chicago’s Garrett Popcorn and Frango brands) has been producing Macy’s (Marshall Field’s) Frango mints since 2017.
Presented by Dr. Neil Gale, Ph.D. at 12/05/2018 12:10:00 PM