The Collins House, now located at 703 West Main Street (both the Historic National Road {aka: Cumberland Road} and Route 66 travel down Main Street), was the home to Daniel Dove Collins, the first President of the City of Collinsville. 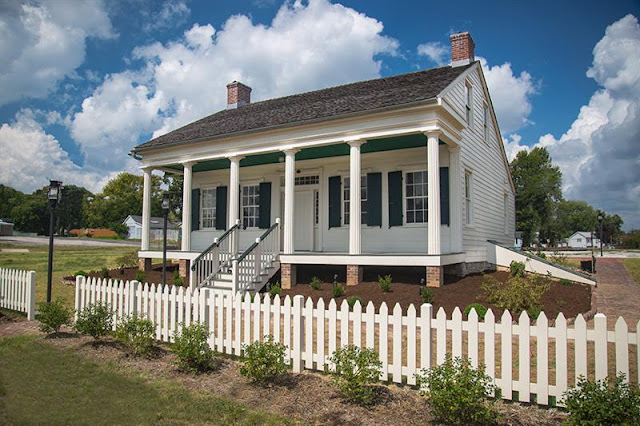 Built by D.D. Collins in 1845, the house is in Greek Revival style, a popular style between 1820 and 1850. The house was originally located at Main and Center Streets and moved to its second location a distance of six blocks to 621 West Main Street in the 1880s or early 1890s.

The house appears to be of post and beam construction. The porch spans the front of the house and has six Doric columns supporting the porch roof. The house has five openings on its front, 4 windows and a center entry door, each is symmetrically between the columns. It's sided with clapboard which is thought to be original. This home is one of the oldest in Collinsville and the only example of this architectural style in the area. 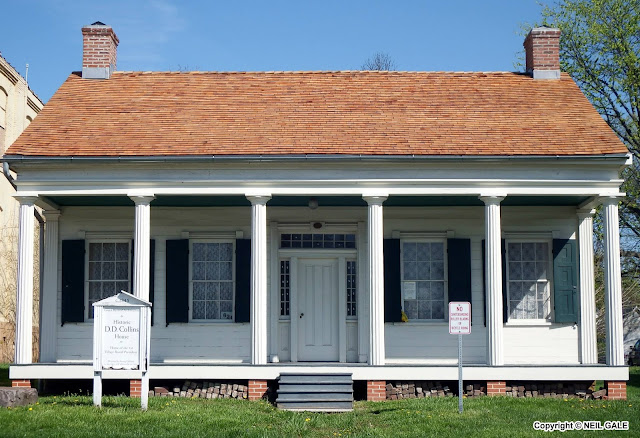 As the story goes, the main floor joist for the first floor may have been salvaged from a steamboat stranded on one of the Cahokia Mounds during the flood of 1844. 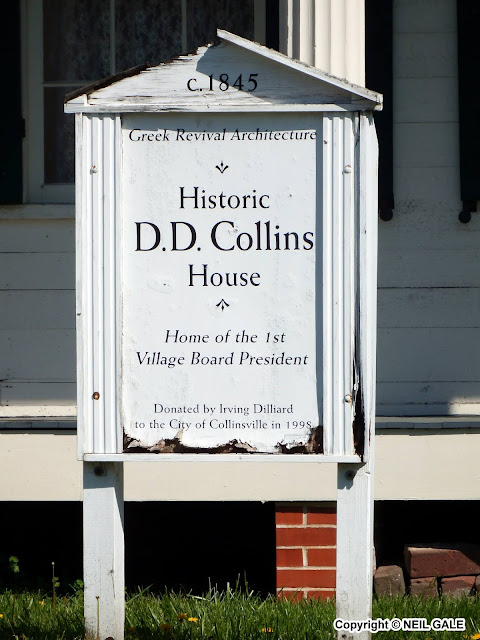 The original owner and builder of the house, Daniel Dove Collins was a cousin of the Collins brothers who had founded the town. He came to Collinsville from Bangor, Maine via Chicago. He served as the first village board president. He also served as an Associate Judge in Madison County and for the rest of his life was referred to as "Judge." He also served as the president of the Collinsville School Board and later as County Highway Commissioner. In 1998, the late Irving Dilliard purchased the D.D. Collins House, and donated it to the City of Collinsville. Mr. Dilliard's grandparents lived in the house at one time, and he was interested in the preservation of the house. The City's Historic Preservation Commission (HPC) was then tasked with restoring the Collins House. The HPC serves as the City's mechanism to identify and preserve distinctive and architectural characteristics of the City that represent the City's cultural, social, economic, political and architectural history. The HPC has applied for, and has been awarded numerous grants to be used for restoration of the Collins House. Additionally, numerous individuals have generously contributed to the project. With Federal, State and local grants and private donations, the HPC has completed internal demolition, hazardous material abatement, required structural repairs, roof replacement, siding repair and replacement, exterior painting, and has opened original fireplaces. Exterior work has also included new guttering and door, window and shutter replacement.

The house was added to the National Register of Historic Places on November 21, 2002. 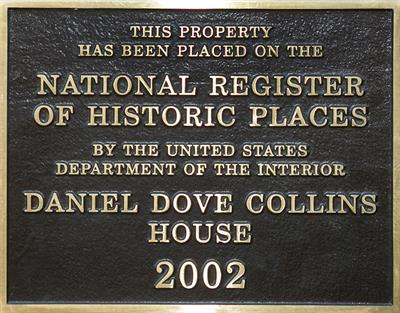 At the September 12, 2011 City Council meeting, the Council approved the expenditure of TIF funds in the amount of $150,000 to complete Phases I, II, and III of the renovations to the Collins House. Along with $58,000 remaining from a grant, these funds will be used to make upgrades to the HVAC system, install security and fire alarm systems, upgrade plumbing, remove and replace plaster walls and ceilings, interior painting, and repair and refinish flooring. Additionally, the original fireplaces will be renovated, millwork completed, and an ADA accessible restroom and ramp will be installed. 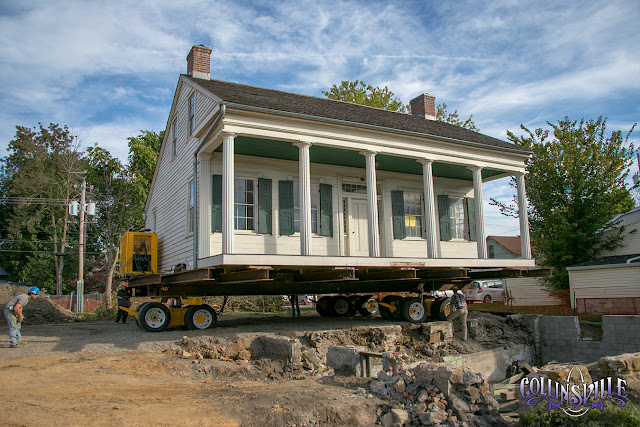 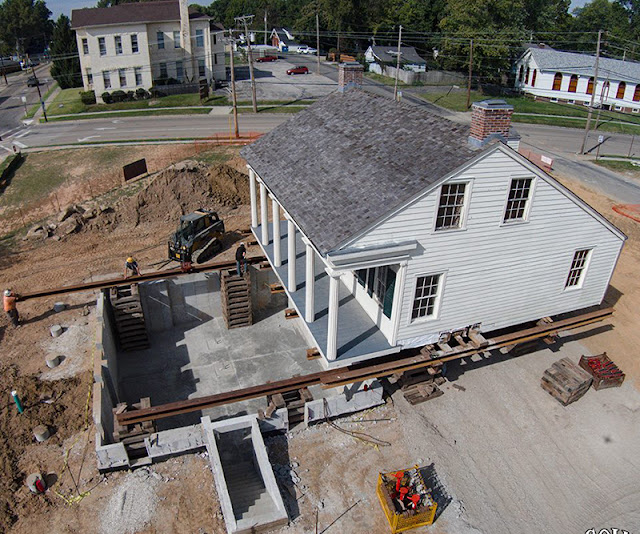 Plans also include the creation of an educational garden area. This will be the first historic home attraction for the City and plans are to furnish it to the period of 1840-1860 and eventually have it open for public visitation and educational programs.

The Collins House was moved about 200 feet to the corner of Main and Combs streets; now at 701 West Main Street.

A BRIEF HISTORY OF THE COLLINS HOUSE AND ITS OWNERS
In 1837, the first plat of the Town of Collinsville, executed and recorded by Elizabeth W. Collins (the widow of Willam B. Collins), Joseph Darrow, and Horace Look, being all of the owners of the property.

On October 2, 1845, Elizabeth W. Collins, as guardian of the children/heirs of William B. Collins, sold and conveyed Lot 6, Block 1 of the Town of Collinsville to Daniel D. Collins. This property was located on the northeast corner of Main Street and Center Street; said lot 66 feet on Main Street and 148 ½ feet along Center Street, and bordered on the rear by Wood Alley.

It was upon this property that Daniel D. Collins built a house for himself and his new wife, Elizabeth Anderson Collins. The house was built on the rear portion of the property

On March 17, 1849, Daniel D. Collins and his wife conveyed the property to Lewis Lancaster.

On April 1, 1856, Lewis Lancaster and his wife conveyed the property to Joseph Lemen Jr.

On July 22, 1856, Joseph Lemen Jr. and his wife conveyed the property to Andrew Edwards. In this transaction, he apparently financed this purchase by giving a mortgage to the seller, Joseph Lemen.

In October 1858, the property was purchased by the Chancery Court.

On May 8, 1860, the interest of Andrew Edwards and his wife was conveyed by a Masters Deed back to Joseph Lemen.

On December 2, 1861, Joseph Lemen and his wife conveyed the property to Oliver C. Look. During this time, Look may have built the building on the east 22 feet of Lot 6. An old photo exists of “D. W. Jones Candy and Confectionery Store” with the house on the west and set back from Main Street towards the rear of the building (as seen in the old photograph). Oliver lived on the property from 1861 to 1885.

On April 22, 1887, Oliver C. Look and his wife conveyed the property to James I. Dilliard (his son-in-law, married to their daughter Mary Look; Mary lived in the house as a child. James and Mary were the parents of Irving Dilliard who purchased the house in 1998 and donated it to the City).

On March 30, 1892, Charles Gindler conveyed to the State Bank of Collinsville the west 2/3 of Lot 6 Block One.

Apparently, at that time the west 2/3 of Lot 6 was vacant, except for the house which had been constructed by Daniel D. Collins in 1845.

The Bank desired to build a larger commercial building to house the bank on the first floor and other businesses on the second floor. It appears that this was the time the house was moved seven blocks west to the 621 West Main Street location.

William and Agnes Bonn purchased the house about 1915 and the widow Agnes passed away in 1996 and in 1998 the house was to go to auction, but just before that happened, Irving Dilliard purchased the house and then donated it to the City of Collinsville. It appears to be the oldest surviving house in the City.