Nathaniel Pope was responsible for giving Illinois its shape.

For over a 100 years, Illinois was known as the Illinois Country and controlled by the French. A scattering of French trading forts existed along the Mississippi, Ohio, and Illinois rivers. Father Pierre Marquette suggested a canal connecting Lake Michigan to the Illinois River seemed like a natural idea for the economic benefit of the interior of the continent. At the end of the French and Indian War in 1763, the territory was ceded to the British.
For 15 years, the British took little interest in the area and had just a few forts. During the Revolutionary War, George Rogers Clark and the Long Knives invaded from what is now Kentucky and took Fort Massac (Metropolis, Illinois) and Kaskaskia and proceeded to march across the territory to Vincennes securing the upper Midwest for the new United States of America. During the War, Virginia would control the land for a while then ceded the territory in 1778. After the war, the Illinois Country became part of the Northwest Territory in 1783.

In 1800, Illinois then became part of the Indiana Territory under the governance of a young William Henry Harrison. Due to geographic circumstances and the lack of technology, Illinois and Indiana both grew northward starting at the Ohio River. In order to trade goods, both were initially dependent on southern river traffic to exist.

In 1809, Illinois became its own territory which originally included lands that became the states of Illinois, Wisconsin, the eastern portion of Minnesota, and the western portion of the upper peninsula of Michigan. Ninian Edwards,Pope's cousin, was appointed its first Governor.

As Illinois was preparing to become a state, the remaining area of the territory was attached to the Michigan Territory.

The original boundaries of the Territory were defined as follows: “...all that part of the Indiana Territory which lies west of the Wabash river, and a direct line drawn from the said Wabash river and Post Vincennes, due north to the territorial line between the United States and Canada...”

Kaskaskia was the territorial capital. The 1810 census showed a population of 12,282.

The settlement of the territory was slow due in fact to its isolation on the western frontier, but also in part to the climate, access, and the inability to plow the thick prairie soil, not to mention Indians in its northern portions.

Nathaniel Pope was responsible for the location of Illinois’ most boring border, its straight-line northern boundary with Wisconsin. Had it not been relocated, the Land of Lincoln might have been the Land of Slavery. And what became the Civil War may well have had a different outcome.

Nathaniel Pope was born in Kentucky, Pope’s brother, John, was a U.S. Senator from Kentucky. John Pope used his connections to appoint Nathaniel secretary of the new territory.

Nathaniel then helped get his cousin, Ninian Edwards, appointed Governor of the territory. Before Ninian assumed his role, Nathaniel appointed others that supported Ninian to government positions in the territory.

In 1812, the territory was progressing slowly. After the War of 1812 ended, a portion of what is today western Illinois was designated as the Military Tract for payment for veterans of the war in lieu of a cash payment. However, Illinois was only at 30,000 in population despite the tract. Nathaniel Pope wanted to be more than just the secretary of the territory. He ran to be the delegate to Congress for the territory. He felt he could do more for the territory to help make it a state. He became the Illinois Territory Delegate in the Fourteenth and Fifteenth United States Congress.

The boundaries of Illinois were basically set by three rivers on the south, east, and west borders. The Wabash, Ohio, and Mississippi Rivers hemmed in the slowly growing populace. The northern border of the territory was initially set at the southern end of Lake Michigan. 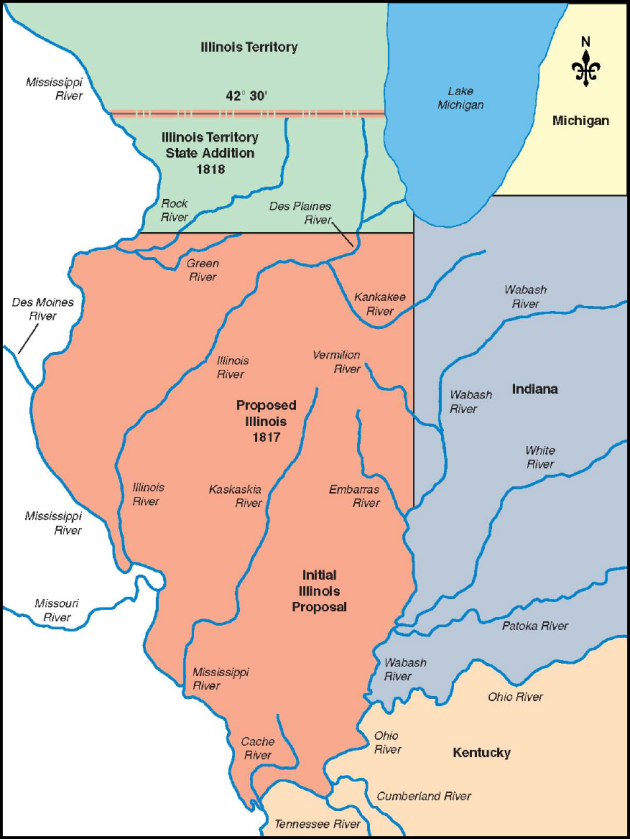 Pope, saw this as a disadvantage should Illinois become a state. While Illinois was populated in the south, very few residents lived north of Vandalia in 1818. But as the Illinois delegate to Congress, Pope was determined to put Illinois on the map, even if it meant rearranging the map.
The Northwest Ordinance originally called for the border to be at the southern tip of the Lake. But when Pope began his push, the border shifted. First, Pope asked for the border to moved 10 miles north of the southern tip. Then after a census was taken to assure 40,000 residents lived in the state (When it was closer to 30,000), Pope submitted his second proposal, eloquently making his case for a new border in the north for two reasons.


Economic – At that time the northern border of the Illinois territory was on an east-west line even with the southern tip of Lake Michigan. Pope argued that if Illinois was given more of the lakefront, the trade in the state would be more connected with northern states by way of the lakes. Trade would flow through the north rather than along the rivers of the south. It would make the great lakes the center of commerce rather than the Ohio and Mississippi rivers.

Nathaniel Pope wanted Illinois to have access to the port of Chicago, which was north of that line. By 1818 plans were already underway for building the Illinois and Michigan canal issuing from Chicago and connecting the Great Lakes with the Mississippi. If the Illinois border was at the southern tip of Lake Michigan, Illinois would be excluded from a share in the canal.

The Cause of Union – Slavery, while in the back of some minds, was most likely an issue. Although it was never explicitly stated by Pope, the growing sentiment of the time that would be reflected in the Missouri Compromise two years later in 1820, it can be inferred from tying the new state to the north economically through the Great Lakes, was an astute accomplishment in hindsight. Illinois would be in the center of the Union come 1860. While many in Southern Illinois would be sympathetic to the Confederate cause, the state would not.

Nathaniel Pope moved the border of Illinois 51 miles north to 42°35” north latitude line has had a profound effect economically on the state and the culture of the region. There still lingers animosity between Illinois and Wisconsin over the moving of the border.
Wisconsin would not join the Union until 1848 largely because of its small population. By ceding 8,500 square miles of lakefront property to Illinois, Pope and Congress shifted the fortunes of the two states. Wisconsin would become part of the Michigan territory.

The first plat of the town of Chicago was filed in 1830. In 1833, Chicago was Incorporated as a town, then Incorporated as the City of Chicago in 1837. And after a railroad and a canal connected the lakefront to the rest of the state, Chicago’s fortunes forever changed. Even today, while the largest city in the state, and half its population, Chicago does not consider itself part of the state. It is its own entity culturally and economically.

For Pope, he would go on to be judge for the United States District Court for Illinois. His son, John, was commander of Union forces at the second battle of Bull Run. Nathaniel Pope has Pope County named after him in southern Illinois.

Email ThisBlogThis!Share to TwitterShare to FacebookShare to Pinterest
Living History of Illinois and Chicago® Illinois Territory, Maps and Plats