The History of the Chicago Cardinals Football Team. 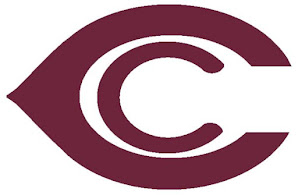 In 1901, O'Brien bought used maroon uniforms from the University of Chicago, the colors of which had by then faded, leading O'Brien to exclaim, "That's not maroon; it's cardinal red!" It was then that the team changed its name to the Racine Cardinals.
The original Racine Cardinals team disbanded in 1906 primarily because of the lack of local competition. A professional team under the same name was formed in 1913, claiming the previous team as part of their history. As was the case for most professional football teams in 1918, the team was forced to suspend operations for a second time due to World War I and the outbreak of the Spanish flu pandemic.

They resumed operations later in the year (even with the suspension, they were one of the few teams to play that year) and have since operated continuously. When the founding of the modern National Football League, the Cardinals were part of a thriving professional football circuit based in the Chicago area. Teams such as the Decatur Staleys, Hammond Pros, Chicago Tigers, and the Cardinals had formed an informal loop similar to, and generally on par with, the Ohio and New York circuits that had also emerged as top football centers before the League's founding.

In 1920, the team became a charter member of the American Professional Football Association (later renamed the National Football League (NFL) in 1922) for a franchise fee of $100. The Cardinals and the Chicago Bears (the latter founded as the Decatur Staleys before moving to Chicago in 1921) are the only charter members of the NFL still in existence. However, the Green Bay Packers, which joined the League in 1921, existed before the formation of the NFL. The person keeping the minutes of the first league meeting, unfamiliar with the nuances of Chicago football, recorded the Cardinals as from Racine, Wisconsin. The team was renamed the Chicago Cardinals in 1922 after a team actually from Racine, Wisconsin (the Horlick-Racine Legion) entered the League. That season the team moved to Comiskey Park.
The Staleys and Cardinals played each other twice in 1920 as the Racine Cardinals and the Decatur Staleys, making their rivalry the oldest in the NFL. They split the series, with the home team winning in each. In the Cardinals' 7-6 victory over the Staleys in their first meeting of the season, each team scored a TD on a fumble recovery, with the Staleys failing their extra-point try.

The Cardinal's defeat of the Staleys proved critical since George Halas's Staleys went on to a 10-1-2 record overall, 5-1-2 in league play. The Akron Pros were the first-ever league champions; they finished with an 8-0-3 record, 6-0-3 in league play, ending their season in a 0-0 tie against the Staleys. Since the Pros merely had to tie the game to win the title, they could afford to play not to lose. If the Staleys had not lost to the Cardinals, they would have gone into that fateful game with an 11-0-1 record and 6-0-1 in-league play. As it was, it all but assured that the Staleys/Bears and Cardinals would be intense rivals.

The two teams played to a tie in 1921 when the Staleys won all but two games. Thus the Cardinals came within 1 point of costing the Staleys a second consecutive championship in the League's first two years of existence.

In 1922, the Staleys, now renamed the Bears, went 9-3-0, losing to the Cardinals twice. The Bears still edged the Cardinals for 2nd place in the League, but those losses dashed all hopes of the Bears repeating as champions.

In 1923 and 1924, the Bears got the better of the Cardinals all three times the two teams played. But in 1925, the Bears went 0-1-1 against the Cardinals with the tie meaning the Cardinals were only a ½ game in front of the Pottsville Maroons heading into their fateful 1925 showdown.

Legend has it that the Cardinals played the Chicago Tigers in 1920, with the loser being forced to leave town. While this has never been proven, the Tigers disband after one season.

The 1925 season ended in perhaps the most significant controversy in professional football history. In those days, there was no fixed schedule nor any playoff games. The championship was decided by winning percentage. After losing in a Chicago snowstorm to the Pottsville Maroons 21-7, the Cardinals found themselves in second place at the season's end. Hoping to improve their record, they scheduled and won two hastily arranged games against weaker teams, the Milwaukee Badgers and the Hammond Pros. The ploy was within the NFL's rules at the time because of the open-ended schedule. Chicago finished the season with a record of 11-2-1. However, the League sanctioned them because a Chicago player, Art Folz, had hired four Chicago high school football players to play for the Milwaukee Badgers under assumed names to ensure a Cardinals victory.

Meanwhile, because Pottsville had played an unauthorized exhibition game in Philadelphia against the University of Notre Dame All-Stars, the Maroons were stripped of the title. The League decided not to award a championship for 1925. Later, it was offered to the Cardinals, whose owner, Chris O'Brien, refused to accept the championship title for his team. He argued that his team did not deserve to take the title over a team that had beaten them fairly. Only after the Bidwill family bought the Cardinals in 1933, the franchise began to claim the 1925 title as its own.

Not only was Slater pro football's first African-American linemen, he was also one of the NFL's most outstanding linemen of his era. In 1928, he encouraged the team to sign Harold Bradley Sr., who became the NFL's second black lineman. Slater and Bradley played alongside each other in the first two games of the 1928 season. A steel plate in Bradley's leg, due to a childhood injury, contributed to Bradley ending his NFL career after only two games—the shortest among the 13 African American players who played in the NFL before World War II.

Between 1926 and 1927, a movement began among the owners of the NFL to follow the racist example of professional baseball. In 1927 every African-American player was out of the League, with the sole exception of Duke Slater. However, the color ban faced by Slater and other black players was not ironclad, and four other African-American players managed to draw salaries in the NFL during short careers interspersed from 1928 through 1933. Slater was once again the only black player in the League in 1929.

On November 28, 1929, Slater participated in an NFL record as a lineman in front of Ernie Nevers in a game in which he scored six rushing touchdowns in a 40-6 victory over the Chicago Bears. Slater played all 60 minutes of the contest, alternating between the offensive and defensive lines and participating on special teams.

By the time of his retirement in 1931, Slater had achieved All-Pro status a total of six times. During his NFL career Slater never missed a game because of injury, starting in a total of 96 of the 99 games he played between the AFL and NFL.

Dr. David Jones bought the team from O'Brien in 1929. In 1932 the team was purchased by Charles Bidwill, then a vice president of the Chicago Bears. The team has been under the ownership of the Bidwill family since then.

In 1944, owing to player shortages caused by World War II, the Cardinals and Pittsburgh Steelers merged for one year and were known as the "Card-Pitt," or derisively as the "Carpets" as they were winless that season. In 1945, the Cardinals snapped their long losing streak (an NFL record 29 games, dating back to the 1942 season and including their lone season as Card-Pitt) by beating the Bears 16-7, which was their only victory of the season. In 1946, the team finished 6-5 for the first winning season in eight years.

In 1947, the NFL standardized on a 12-game season. This would be the most celebrated year in Cardinals history. The team went 9-3, beating Philadelphia in the championship game 28–21 with their "Million Dollar Backfield," that included quarterback Paul Christman, halfback Charley Trippi, halfback Elmer Angsman, and fullback Pat Harder, piling up 282 rushing yards. However, Bidwill was not around to see it; he had died before the start of the season, leaving the team to his wife, Violet. Before the season, he had beaten the Chicago Rockets of the upstart All-America Football Conference for the rights to Trippi. This signing is generally acknowledged as the final piece in the championship puzzle. The next season saw the Cardinals finish 11-1 and again play in the championship game, but lost 7-0 in a rematch with the Eagles, played in a heavy snowstorm that almost completely obscured the field. This was the first NFL championship to be televised. The next year, Violet Bidwill married St. Louis businessman Walter Wolfner, and the Cardinals fell to 6-5-1.

The NFL wanted to put a team in Minnesota, so 2 of the Cardinals games were moved there in 1959. Conversations were had with Violet Bidwill Wolfner, owner of the Chicago Cardinals, about moving her team to the stadium. The Cardinals moved two of their regular-season home games against the Philadelphia Eagles (October 25) (att: 20,112) and New York Giants (November 22) (att: 26,625) to Bloomington for the 1959 NFL season.
Compiled by Dr. Neil Gale, Ph.D.
Presented by Dr. Neil Gale, Ph.D. at 8/19/2017 08:15:00 AM