The History of Bob Farrell and His Ice Cream Parlour Restaurants.

Farrell’s Ice Cream Parlour opened for business on Friday the 13th of September, 1963. The first parlour was located at 21st and W. Burnside in Portland, Oregon. Bob Farrell and Ken McCarthy were the founders and proprietors of this unique parlour restaurant. "When we opened our first store, we had 32 employees, $1,300 in the bank and owed $26,000," remarks Ken about that first day. 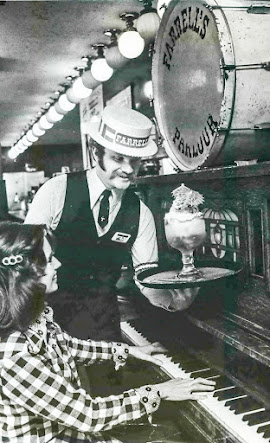 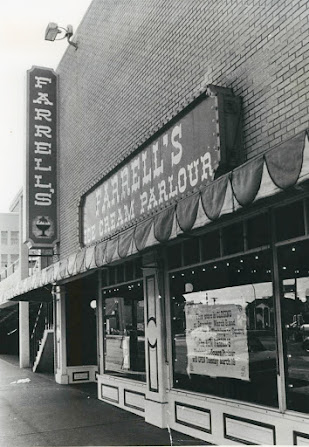 The concept was so simple, yet ingenious. Provide a wholesome, fun place for families, kids, couples, school groups to come to celebrate their successes. Provide a simple menu of burgers, sandwiches, and creative ice cream treats. The menu was printed as a tabloid-style newspaper. The largest 50 scoop sundae, the "Zoo," was delivered with great fanfare by multiple employees carrying it wildly around the restaurant on a stretcher accompanied by the sound of ambulance sirens.

Throw in a candy store for that old-fashioned effect, and make the place fun for everyone.

The ice cream parlour concept was based on the New York City parlours of old; the rest came from Bob Farrell’s upbringing in New York, with delicatessens and corner candy stores. Apparently, it worked - people came in droves. 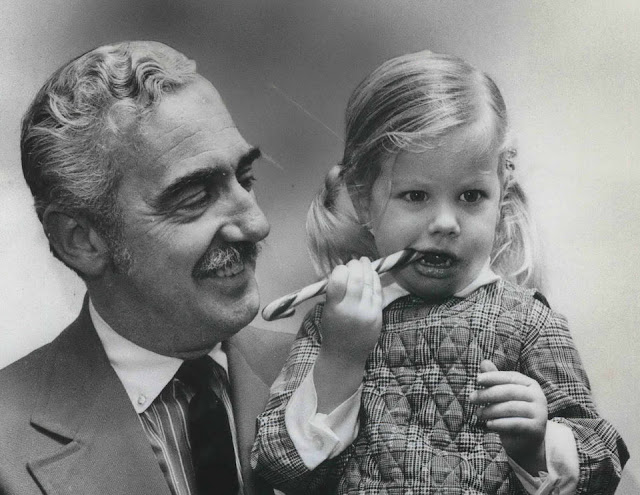 Bob Farrell recollected the first day in his book: "We ran out of ice cream and bananas. We bought all the hamburgers the store above us could grind. We cleaned out every hamburger bun, head of lettuce and tomato we could get from area stores." 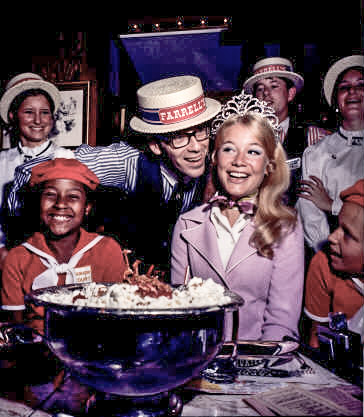 In 1970 a new retail growth industry had just begun to boom - the enclosed shopping center. From Farrell’s standpoint, this was a perfect vehicle for growth - a captive market of mall shoppers, less up-front capital costs to construct a parlour, and all exterior maintenance was handled by the shopping mall in exchange for a nominally higher rent. It was a win-win situation for Farrell’s. A lease agreement was signed for Woodfield Mall. 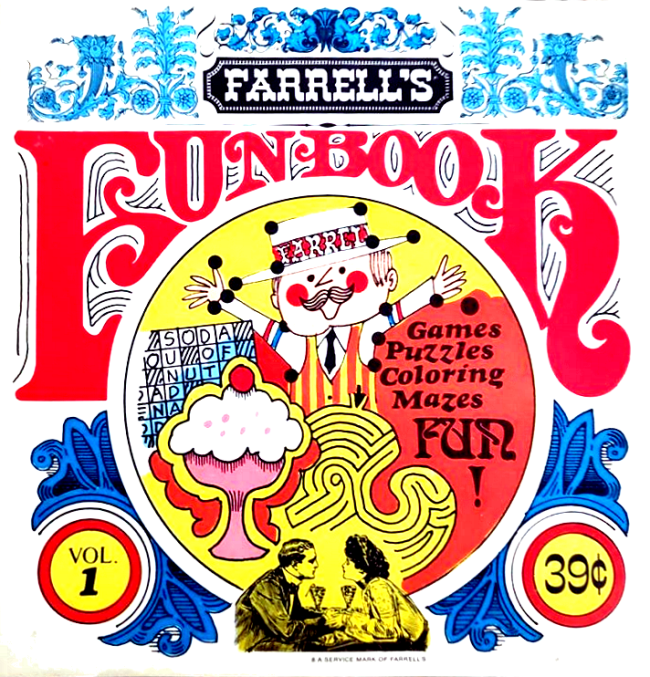 Illinois locations were at:

About Robert "Bob" Farrell
Robert "Bob" Farrell, who co-founded a popular chain of ice cream parlours that were the home of countless children's birthday parties, died Friday, August 14, 2015, in Vancouver after an extended illness.

His death was announced by Farrell's Ice Cream Parlours on its Facebook page late Friday. The company said Farrell passed away with his wife, Ramona, and family by his side. He was 87 years old. 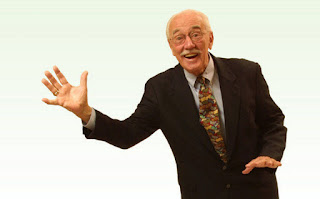 Farrell, who was originally from Brooklyn, N.Y., opened the first Farrell's Ice Cream Parlour in Portland in 1963. By 1970, he had opened 55 shops throughout the West. The chain later expanded to more than 130 shops after it was sold to the Marriot Corp. in 1973, and Farrell remained the company's spokesman until just prior to its sale to an investment group in 1985. Several Farrell's still operate in Southern California under a new company.

Later, Farrell became a part-owner of Pacific Coast Restaurants Inc. and helped build a string of Stanford's and Newport Bay restaurants in Oregon, Washington, and Northern California. In 1995, Farrell left the restaurant business and became a customer service consultant, speaking to employees of companies, such as Nordstrom, Nike, and Safeway about putting customers' interests first.

And Farrell loved to talk about customer service, including an infamous anecdote about a diner who once was charged for an extra pickle at one of his restaurants. In the story, a regular customer had been receiving a free extra pickle whenever he asked for it, and was angered when a new waitress charged him a nickel for the extra pickle. The customer wrote Farrell, saying he would stop coming to the restaurant because of the charge. Farrell made amends with the customer by writing him a letter and offering a free ice cream sundae. The phrase "Give 'em the pickle" became a customer service motto for the company.

"The customer is the boss," Farrell said in 1989 recalling the incident. "There are three little words we always want them to say -- 'I'll be back.' There's not a better job in the world than making someone happy."

Farrell was born in 1927 in Brooklyn, New York, and joined the Air Force in 1945 after graduating from high school. After World War II ended, he served at radar stations in the Pacific Northwest. After completing his business degree, he worked as a salesman and manager for the Libby Foods company before opening his first ice cream parlour in Portland in 1963. Farrell made an appearance in TV's "The Merv Griffin Show," and in 1976 he received the Horatio Alger Award from Norman Vincent Peale. At one point, Farrell's held the record for the World's Largest Sundae in the Guinness Book of Records.

Farrell's ice cream shops had an old-fashioned feel to them, and were a popular spot for birthday celebrations, which featured free sundaes and waiters singing "Happy Birthday."

One of the stories he would tell in his customer service presentations involved a birthday party gone awry not long after the first Farrell's opened. An upset customer came to pay his bill. Farrell learned that the man's son was celebrating his sixth birthday, but nobody had given him his free sundae or sung "Happy Birthday." 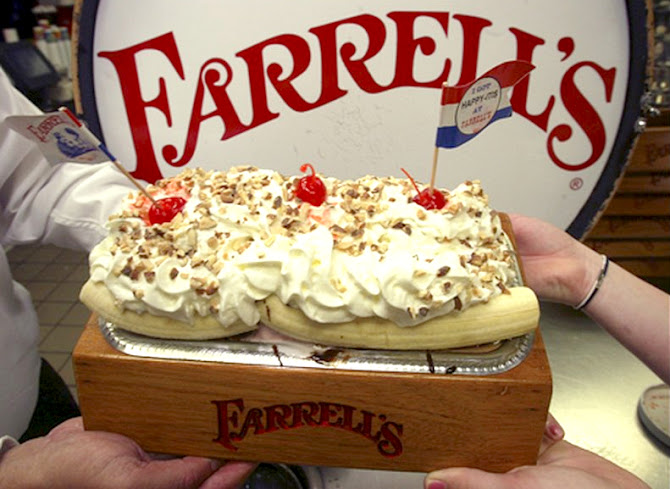 Farrell went straight to the fountain and made a sundae, topping it with a birthday candle. Then he asked the boy his name, stood up on a table, and yelled for everybody in the restaurant to be quiet.

"We made a mistake," Farrell said. "We didn't sing Happy Birthday to Alex, and I want all of you to help us sing it now."

The result was one ecstatic boy who became a loyal customer. Farrell said he continued to see Alex years later, and that he still had the birthday photo taken at the restaurant.

"I didn't sell ice cream," Farrell said of his years with the ice cream parlour. "I sold a good time. The ice cream was the vehicle."
INDEX TO MY ILLINOIS AND CHICAGO FOOD & RESTAURANT ARTICLES.
VIDEOS
The Farrell's Ice Cream Parlour Restaurants Story.