There were two villages named Halfway, Illinois, both being in Williamson County, at different times and at different locations. 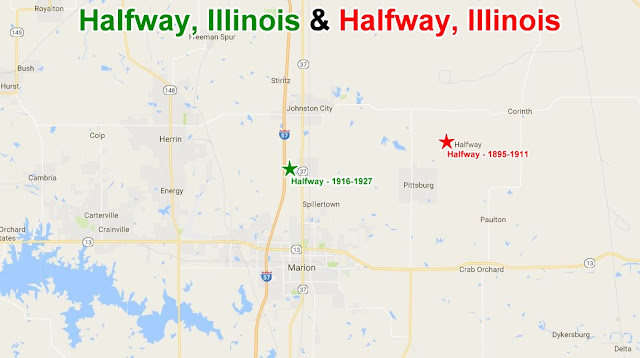 Half Way, Illinois was an unincorporated settlement in northeastern Williamson County, Illinois located about halfway between Marion and Corinth, Illinois.

Joseph Williams owned a general store in section 25 of Lake Creek Township, just a mile east from the spot where Vancleve Hendrickson opened the Oak Hill post office in his home on his farm (on the west township line in section 30 of Corinth Township) on October 30, 1871 and became its postmaster. James Hearn bought the farm and became the new postmaster on November 11, 1872. The post office was closed on December 15, 1876 and the Oak Hill community was without a post office for 18 years.

The new town of Pittsburg R.F.D. Illinois[1], began in 1905 and Albert Riggs became its first postmaster on December 8, 1906. Nicholis Riggs became the postmaster of Half Way, the same day, and remained in that position until the post office was closed December 15, 1911.

Halfway was a rough and very wet unincorporated settlement nicknamed "Little Juarez" in Williamson County, Illinois. The nickname "Little Juarez" came about from the general lawlessness, shootings and proliferation of gambling and booze, even during Prohibition.

One of the earliest references to the community dates to September 1916 when the circuit judge, D. T. Hartwell, issued an injunction against 31 saloons and clubs in nearby Herrin restraining them from "selling intoxicating liquors of any kind." The sheriff and his deputy (and future prohibition era Sheriff) George Galligan served the court injunctions on establishments on the 9th. A few days later one of the Marion newspapers noted that "Herrin is again dry," and that "now Energy and Halfway will become points of interest to Herrin tourists." 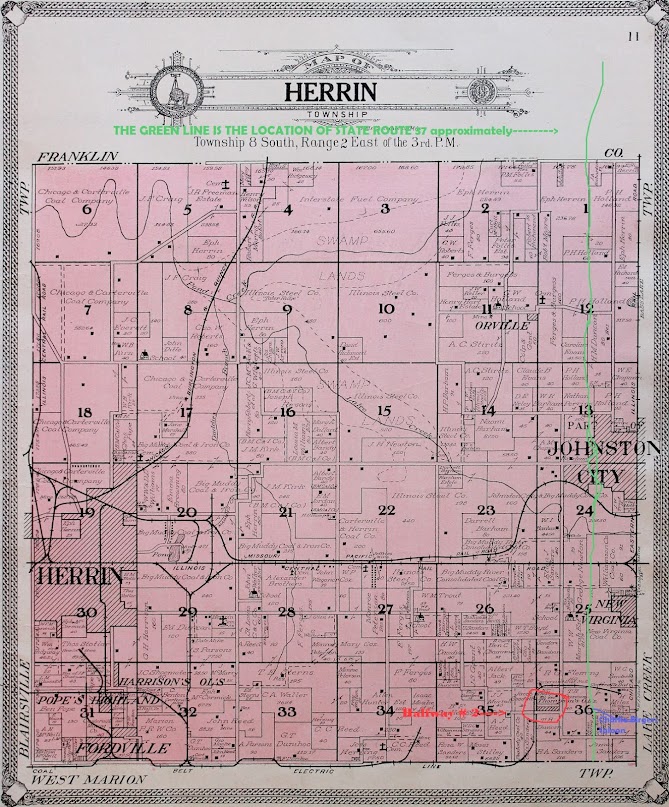 Following the onslaught of nationwide prohibition in 1920, Halfway became an even bigger destination with saloons (speakeasies) on just about all corners. Charlie Birger, an area bootlegger and gangster became the best known of the local operators. The speakeasy's became targets of Klan raids in 1923 and early 1924, followed by two targeted fires which eventually destroyed all of the buildings but Birger's.

On October 7, 1924, Birger's speakeasy burned at Halfway. This was one of the buildings which had been closed for a year under a government injunction and was where one room had been used for the sale of refreshments contrary to the law while the other had been prepared for a dance hall although it had not been opened when the injunction went into effect. At that time it was reported that it was controlled by Charlie Birger. The origin of the fire is unknown. The building was of frame and it and all its contents were a total loss.

In June 1925, a reporter described what was left. "For nearly a year, the lone building (Birger's joint) stood alone on the state concrete highway but nothing now remains but weeds, charred wood and broken bottles." Before the fires and the raids, "saloons, dance floors, restaurants and sleeping rooms made up the settlement."

[1] Rural Free Delivery (RFD) is a service which began in the United States in the late 19th century, to deliver mail directly to rural farm families. Prior to RFD, individuals living in more remote homesteads had to pick up mail themselves at sometimes distant post offices or pay private carriers for delivery.

Special thanks to David W. Jent's, Great-Great Grandson of J.H. Williams, founding Postmaster of Halfway #1, for location corrections and additional historical details.
Presented by Dr. Neil Gale, Ph.D. at 9:53 AM

Email ThisBlogThis!Share to TwitterShare to FacebookShare to Pinterest
Living History of Illinois and Chicago® IL Southern, Lost Towns of Illinois