The S.S. Aquarama, a luxury cruiser, docked at Navy Pier, Chicago, for the Summer of 1955.

The S.S. Aquarama spent the summer of 1955 at Navy Pier as a floating entertainment venue. It was the first stop in the Aquarama’s troubled history. 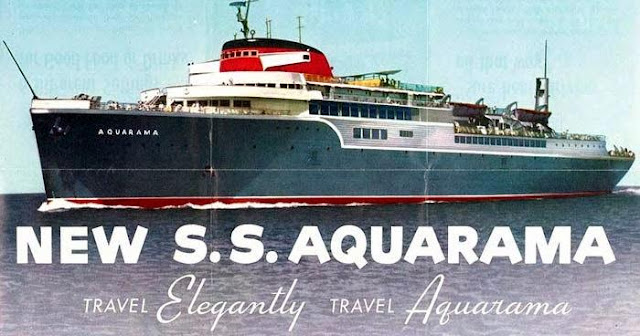 The S.S. Marine Star was built in 1945 as a troop transport ship for the Navy during World War II. Designed as a transoceanic troop carrier, the ship made one trip across the Atlantic before combat ceased.

The ship remained unused for a few years until it was bought in 1952 by the Sand Products Company of Detroit. After being purchased, the ship was towed to Muskegon, Michigan where it was converted into a commercial cruise ship. The entire process took approximately two years to complete and cost nearly $8 million. The president of the Sand Products Company at the time, Max McKee, wanted the Aquarama to be an ocean liner for the Great Lakes. 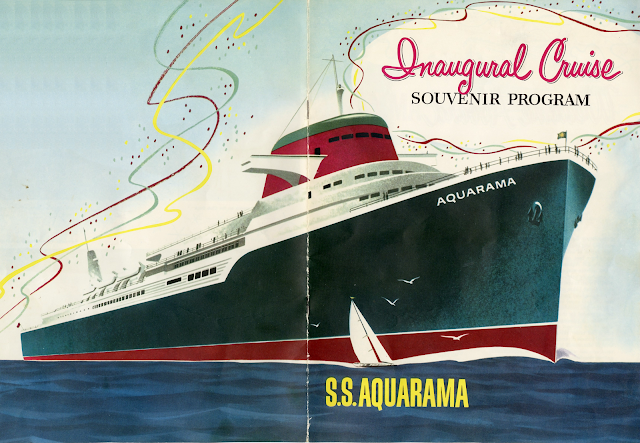 The Aquarama was sent to Chicago, Illinois, and docked at Navy Pier in the summer of 1955 before touring other Great Lakes ports. While in Chicago the Aquarama had activities off the ship too. The now famous Tommy Bartlett water ski show in the Wisconsin Dells actually started in Chicago and preformed at Navy Pier. There were high divers that jumped off the Aquarama for the Aquarama passengers' entertainment.


On the ship there were numerous sources of entertainment for the passengers. Among many other things there was a "carnival room" that had a gift shop, games, and a photo booth. Two television theaters were available to be used for conferences or special programs. Along with the theaters, the ship contained two dance floors that were accompanied by a stage for an orchestra, or other performances. For those traveling with their families, there were even baby-sitting services available. People had the choice of four different types of restaurants that varied in style and price. Along with the restaurants, there was a main cafeteria that was able to fit nearly 300 people.

In 1957 the Michigan-Ohio Navigation Company, began service (a very large ferry) from Detroit to Cleveland, carrying automobiles and passengers. At 520 feet long and 12,000 tons, the S.S. Aquarama was the largest passenger ship to operate on the Great Lakes. She could carry 2,500 passengers and 160 automobiles, with a maximum cruising speed of 22 miles per hour. Once in service, the ship was able to transport its passengers and their automobiles from Detroit to Cleveland in under six hours.

The ferry runs between Cleveland and Detroit lasted only 5 years from 1957 to 1962.

The ship’s size, operating costs, and the fact that there were no overnight accommodations on-board made it hard to run profitably. And, several accidents due to poor maneuverability gave the Aquarama a reputation as an accident-prone ship given the unflattering nicknames “Aquarammer” or “Crusherama.” She rammed a seawall in Windsor, Ontario. On her maiden voyage out of Muskegon, Michigan, she dragged along the dock’s steel sheet-piling. And in another incident, she bumped into a docked U.S. warship, the U.S.S. Macon, in Cleveland, Ohio.

On September 4, 1962 the ship made its last trip before being towed to Muskegon, Michigan. Operating the ship from Muskegon to Milwaukee as a replacement for the older Milwaukee Clipper was proposed, but $700,000 for dredging so the Aquarama could be accommodated in Milwaukee harbor was needed. As a result, the ship sat idle until 1987 when it was sold to the North Shore Farming Company for around $3 million. The Aquarama was briefly docked at Sarnia, Canada, then Windsor, Canada before returning to its original name of Marine Star and moving under tow to Buffalo, New York.

On August 3, 1995 the Marine Star berthed at the Cargill Pool Elevator where it stayed until it was towed overseas to Aliağa, Turkey for scrap in September of 2007. 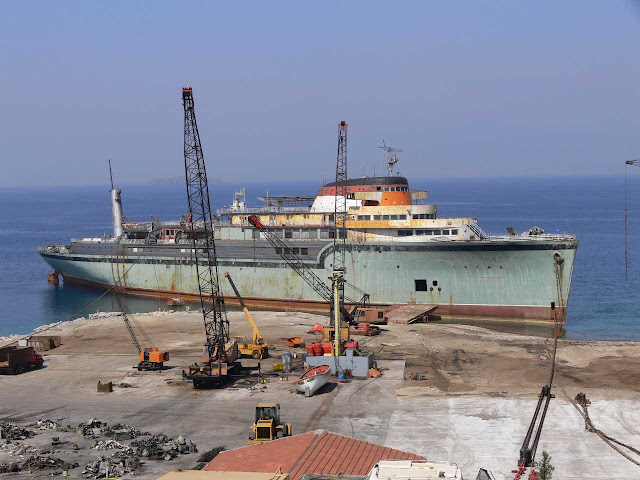 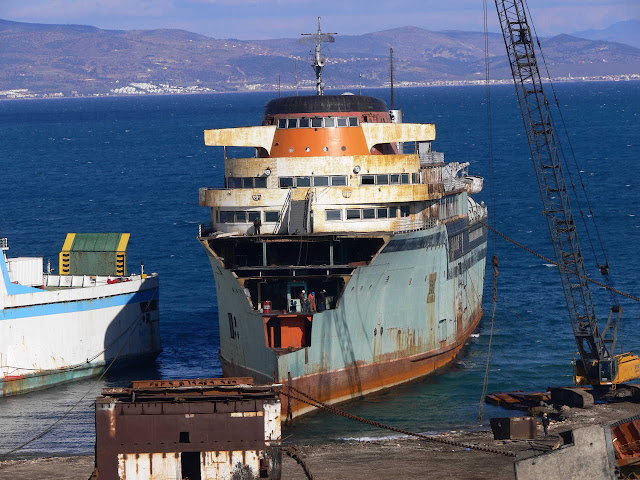 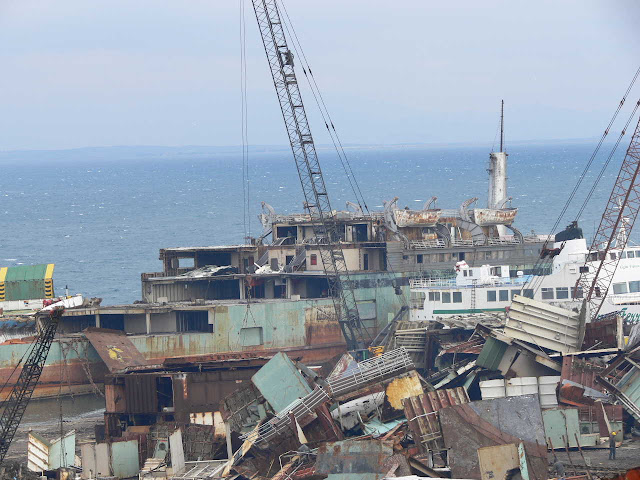 A Few Interesting Facts About the S.S. Aquarama


*Star indicates only some of the firsts in marine history you will see aboard the Aquarama.
A MESSAGE FROM THE VESSEL OWNERS
Culminating many years of architectural design, planning and engineering, it is with pleasure and a high degree of satisfaction that we present what many have been good enough to call a personality ship, the S.S. Aquarama.

Our definite aim and purpose has been to build an unusually attractive ship outwardly and inwardly which in operation will bring prestige to the entire Great Lakes area.

We have been particularly mindful of having a staunch, safe vessel in all respects which the public may travel in confidence. Vast sums of money have been expended for this single objective.

Building a passenger ship for Lakes service because of the imposed short service season is definitely a risk undertaking. It is our belief that commercial success depends in no small degree on a high level of attainment in the ship's physical development coupled with the ultimate in appointments and service features. Certainly there must be no compromise with quality.

There is little contrary opinion that most Americans are water minded. We are traditionally a sea faring people, for whom an expanse of water has an irresistible lure. As it is steeped in us, so the coming generations will be imbued with the same longing. It would be tragic indeed should all of us be denied the advantages and advancements for inland water travel that the forward surge of progress will bring on land and in the air.

We believe the "Aquarama" has a great future service to perform as an agency for safe, speedy travel between the metropolitan centers of Detroit and Cleveland. The water route offers a carefree, uncongested, refreshing and relaxing avenue for the traveler, tourist, vacationer, convention and other group bodies. A voyage on such a ship over scenic waters is unmatched and will offer spice and zest to our every day living far removed from the commonplace. We are privileged to hope that the new serv­ice will afford a maximum of enjoyment to many, many thousands of budget minded pleasure seekers each summer as well as making the water highway between these gateway communities a veritable must on the nation's summer travel itinerary. The convenience of volume automobile transport which the vessel supplies, it is also hoped, will offer enjoyable relief and reduce accidents for the car user.

We wish herein to gratefully acknowledge the patient able assistance rendered by the various Agencies of Government. The finished ship is the product of the energies of a multitude of earnest capable co-workers who have labored zealously; throughout design and construction, with pride, artistry and ingenious craftsmanship. To all of these we wish to express our sincere appreciation.

We hope you as a patron truly find the qualities we have tried to conceive and express in this rugged ship and its appointments, comforts and conveniences. If you so find, for it has been conceived for your pleasure and enjoyment, we are well requited.

Respectfully Yours,
The Vessel Owners
GREETINGS FROM THE VESSEL'S CHARTERERS

We are highly honored to have the "Aquarama" entrusted to us for operation. We will do our utmost to conduct our operations on a plane comparable to the high character and refinement of this dignified ship.

Leaders in Detroit and Cleveland have been acutely conscious for years of the vital need of restoration of an inter-city water service. It is well recognized that such a service will do much to advance the economy of these rapidly growing communities. This spectacular ship will act as an alluring feeder for tourism which is economically  important. Of  transcending  impor­ tance, it will furnish an appealing medium for limited lake voyages, diversion  and enjoyment, within the range of all income levels who have long been denied such cruising advantages.

Such a strikingly unusual vessel as the "Aquarama" will grace the water route between Detroit and Cleveland in a manner and degree never expected by the most forward-looking of these neighboring communities. As well, it is certain to attractively fill a niche in our growing water commerce, supplying lustre and giving prominence to the entire area.

We, as the operators, as well as the public, are fortunate to possess in the "Aquarama" a ship wherein meticulous attention has been given to detail in providing for passenger comfort, convenience and safety. Not always mentioned but, to all associated in operation, of no lesser importance is the quality of accommodation afforded crew and ship personnel. You may judge of the pride of our ship environment and our capacity and desire to please you when you step aboard. Travel elegantly with us regularly.