The 1933 Century of Progress International Exposition in Chicago Demonstrates the Mechanical Television.

An early form of television known as “mechanical” television was demonstrated at Chicago's Century of Progress World's Fair in 1933. Mechanical television used a perforated spinning disc illuminated from behind to create an image.

The 1939 World's Fair in New York City is usually associated with early television demonstrations in the United States. RCA’s splashy display introduced a fully electronic form of television to America. This is the version of television that focused a stream of electrons on a cathode ray tube and became the world's standard for television. 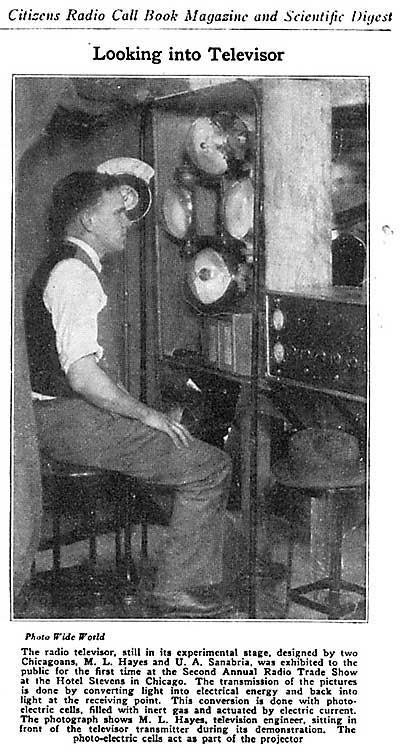 The Century of Progress demonstration took place in the small Television Theater in the Fair’s Electrical Building. Volunteers would appear before a primitive camera and the image would be displayed live on a large screen to the astonished audience.

The volunteer would get a card afterward saying they had personally appeared in a television demonstration. This gimmick was copied by RCA at their demonstration at the 1939 New York World's Fair.

The technology shown at the Century of Progress was developed by Chicagoan Ulises Sanabria, whose experiments in television go as far back as the mid-1920s. Sanabria demonstrated his invention at stores and conventions across the country culminating in his 1933 World’s Fair display sponsored by the Hudson-Essex Motor Company as a way to promote their own products at the fair.
Sanabria, who taught himself electronics as a teenager, went on to found the American Television Institute in Chicago, a technical school where students were trained in the electronic television that was later adopted by the industry. Sanabria also worked with inventor Lee deForest, a pioneer in ship-to-shore radio broadcasts, to build a flying torpedo controlled by television (an early military drone).