Everthing you wanted to know about the "Zoot Suit" created in Chicago by Harold C. Fox, and the National Zoot suit riots.


As a child, Harold C. Fox had studied to be a violinist. He got a job with a string group in a Chicago restaurant, but when the Century of Progress World's Fair opened in 1933, the restaurant manager decided to change the sweet sound of Fox's combo to something brasher and brassier. Violins were out; trumpets were in.

Fox had never played the trumpet before, but this was the Depression and one could not afford to let a good job slip away.

When the fair closed, Fox got an offer to play with another combo, in New York. But by the time he arrived with his wife, Marie, and daughter, the deal had fallen through. Eventually, Fox managed to hitch up with a group called the Chick Winters Band. That opened some more doors, and Fox was invited to play his trumpet over New York`s WNEW radio station. 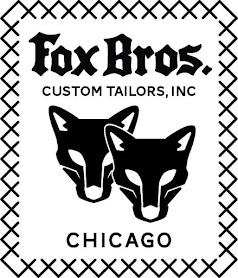 All the while, Fox was staying in touch with his father, who owned a woolen wholesaling house back in Chicago. His father would send him sample bolts of cloth, and Fox would design wild suits and band uniforms for his musician friends. Fox got the idea for the Zoot suit in New York, but he didn't put it into production until 1939, when he moved back to Chicago to take over the family business with his brother, Aaron.

The Zoot suit is the most innovative men’s garment of the twentieth century. Its knee-length jacket featured exaggerated padded shoulders, and the voluminous, high-waisted pants narrowed to a pegged ankle.


When the Zoot suit emerged, it was a radical departure from typical men’s suits which had changed little in nearly a century. Fox sold the first Zoot suit in Chicago in 1939. Fox came up with the name "Zoot Suit" by borrowing from the distinctive street jargon of the day.

Fox even invented the most distinctive accessory to the Zoot suit, the long, looping watch chain worn dangled from a trouser pocket.

"Our clothing store, Fox Brothers, had a commode you flushed by pulling on a chain," Fox recalled. "One day I flushed the toilet and the chain came off in my hand. For some reason, I took the chain with me when I went out into the showroom to phone a plumber." A commodious chain.

"Some cat was getting fitted for a Zoot suit and he asked me if I had any accessories to go with the suit. Just on impulse, I hooked one end of the chain to his pants and put the other in his pocket. Bingo! He thought it was terrific, and pretty soon everybody who came in for a Zoot suit had to have a chain."The Zoot suit was one of Fox Brothers' first designs, and almost instantly the clothing house found itself among the avant-garde of American fashion. 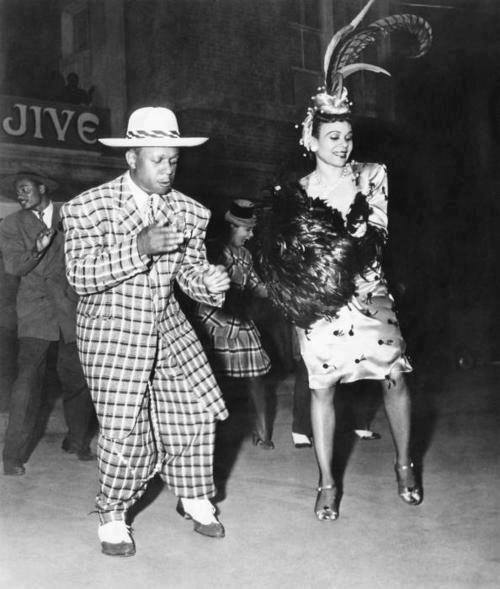 Fox came up with endless variations to the Zoot suit, then branched out. He takes credit for popularizing padded shoulders, polka-dot shirts, be-bop berets (adorned with an upright toothpick), the cape-back Casablanca-style trench coat, and something he calls the double-single-breasted jacket. 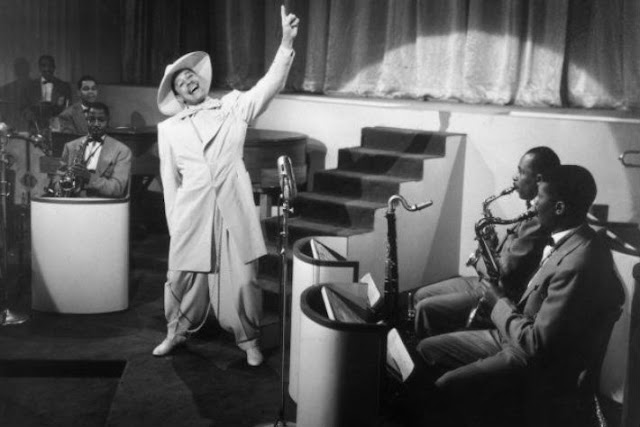 Fox was the leader of the Jimmy Dale Orchestra when he took over his family’s tailoring business in 1941. He reputedly traded suits for musical arrangements made by the popular jazz musicians who frequently played in Chicago and sported the extreme style. In addition to jazz musicians, urban blacks and Latinos were the primary wearers of the style. 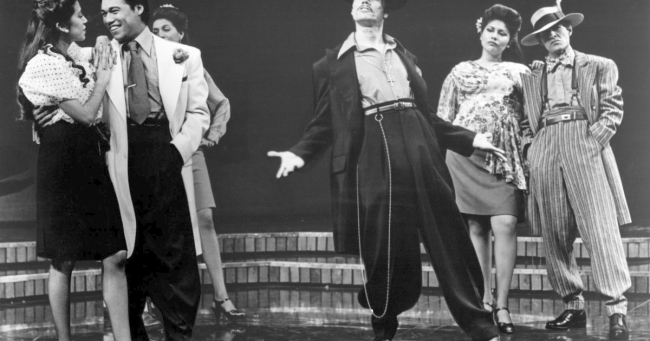 Fox Brothers were also the clothier of choice for Chicago's leading mobsters and panderers.

The Zoot suit was regarded as fashionable by some and as rebellious and unpatriotic by others. Its popularity coincided with World War II. Rationing during the war led to clothing restrictions for U.S. citizens. To some people, the copious amounts of fabric required to construct a Zoot suit constituted open defiance of the American war effort.


THE STORY OF THE ZOOT SUIT RIOTS
The Zoot Suit Riots were a series of violent clashes during which mobs of U.S. servicemen, off-duty police officers and civilians brawled with young Latinos and other minorities in Los Angeles. The June 1943 riots took their name from the baggy suits worn by many minority youths during that era, but the violence was more about racial tension than fashion. The Zoot suit garnered a racist reputation. In California, Latino, known as “pachucos” (male members of a counterculture associated with Zoot suit fashion, jazz and swing music), often wore flashy, brightly colored Zoot suits, porkpie hats and long dangling watch chains, were increasingly viewed by affluent whites as menacing street thugs, gang members and rebellious juvenile delinquents.

Wartime patriotism didn’t help matters: After the bombing of Pearl Harbor on December 7, 1941, and the U.S. entry into World War II, wool and other textiles were subject to strict rationing. The U.S. War Production Board regulated the production of civilian clothing containing silk, wool and other essential fabrics. Despite these wartime restrictions, many bootleg tailors in Los Angeles, Chicago, New York and elsewhere continued to make the popular Zoot suits, which used profligate amounts of fabric. Servicemen and many other people, however, saw the oversized suits a flagrant and unpatriotic waste of resources.

The local media was only too happy to fan the flames of racism and moral outrage: On June 2, 1943, the Los Angeles Times reported: “Fresh in the memory of Los Angeles is last year’s surge of gang violence that made the ‘Zoot suit’ a badge of delinquency. Public indignation seethed as warfare among organized bands of marauders, prowling the streets at night, brought a wave of assaults, and finally murders.” 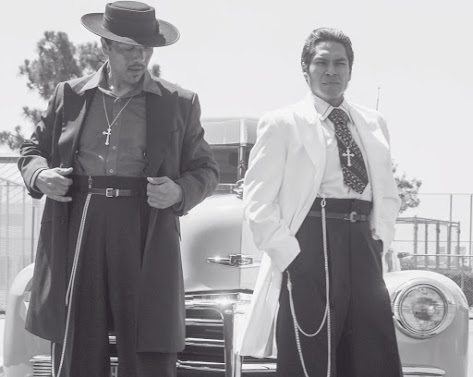 In the summer of 1943, tensions ran high between Zoot-suiters and the large contingent of white sailors, soldiers and Marines stationed in and around Los Angeles. Mexican Americans were serving in the military in high numbers, but many servicemen viewed the Zoot-suit wearers as World War II draft dodgers (though many were in fact too young to serve in the military). 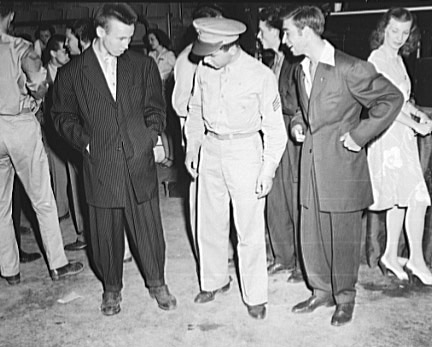 On May 31, a clash between uniformed servicemen and Mexican American youths resulted in the beating of a U.S. sailor. Partly in retaliation, on the evening of June 3, about 50 sailors from the local U.S. Naval Reserve Armory marched through downtown Los Angeles carrying clubs and other crude weapons, attacking anyone seen wearing a Zoot suit or other racially identified clothing.

In the days that followed, the racially charged atmosphere in Los Angeles exploded in a number of full-scale riots. Mobs of U.S. servicemen took to the streets and began attacking Latinos and stripping them of their suits, leaving them bloodied and half-naked on the sidewalk. Local police officers often watched from the sidelines, then arrested the victims of the beatings.

Thousands more servicemen, off-duty police officers and civilians joined the fray over the next several days, marching into cafes and movie theaters and beating anyone wearing Zoot-suit clothing or hairstyles (duck-tail haircuts were a favorite target and were often cut off). Negroes and Filipinos — even those not clad in Zoot suits — were also attacked.

By June 7, the rioting had spread outside downtown Los Angeles to Watts, East Los Angeles and other neighborhoods. Taxi drivers offered free rides to servicemen to rioting areas, and thousands of military personnel and civilians from San Diego and other parts of Southern California converged on Los Angeles to join the mayhem.

Leaders of the Mexican American community implored state and local officials to intervene — The Council for Latin American Youth even sent a telegram to President Franklin D. Roosevelt — but their pleas met with little action. One eyewitness, writer Carey McWilliams, painted a terrifying picture:

“On Monday evening, June seventh, thousands of Angelenos turned out for a mass lynching. Marching through the streets of downtown Los Angeles, a mob of several thousand soldiers, sailors, and civilians, proceeded to beat up every Zoot-suiter they could find. Street cars were halted while Mexicans, and some Filipinos and Negroes, were jerked out of their seats, pushed into the streets, and beaten with sadistic frenzy.”

Some of the most disturbing violence was clearly racist in nature: According to several reports, a black defense plant worker — still wearing his defense-plant identification badge — was yanked off a streetcar, after which one of his eyes was gouged out with a knife.

Local papers framed the racial attacks as a vigilante response to an immigrant crime wave, and police generally restricted their arrests to the Latinos who fought back. The riots didn’t die down until June 8, when U.S. military personnel were finally barred from leaving their barracks.

The Los Angeles City Council issued a ban on Zoot suits the following day. Amazingly, no one was killed during the weeklong riot, but it wasn’t the last outburst of Zoot suit-related racial violence. Similar incidents took place that same year in cities such as Philadelphia, Chicago and Detroit.

A Citizens’ Committee appointed by California Governor Earl Warren to investigate the Zoot Suit Riots convened in the weeks after the riot. The committee’s report found that, “In undertaking to deal with the cause of these outbreaks, the existence of race prejudice cannot be ignored.”

Additionally, the committee described the problem of juvenile delinquency youth as “one of American youth, not confined to any racial group. The wearers of Zoot suits are not necessarily persons of Mexican descent, criminals or juveniles.

"It was okay with me," Fox said of the end of the fad. "I was sick of Zoots by that time anyway."

The initial fad of Zoot suits was short-lived, but the 1990s witnessed a resurgence in the popularity of swing dancing and the Zoot suit. In an effort to embody the spirit of the 1940s, many dancers dressed in vintage clothing which helped bring back the Zoot suit. Soon, the fad expanded to dressier occasions such as high school proms. Several tailors throughout the country began offering custom-made Zoot suits. Fox, who died in 1996, continued wearing the fashion throughout his life and was buried in a lavender Zoot Suit.