John Wayne Gacy was a serial killer who was found guilty of killing 33 boys and young men. 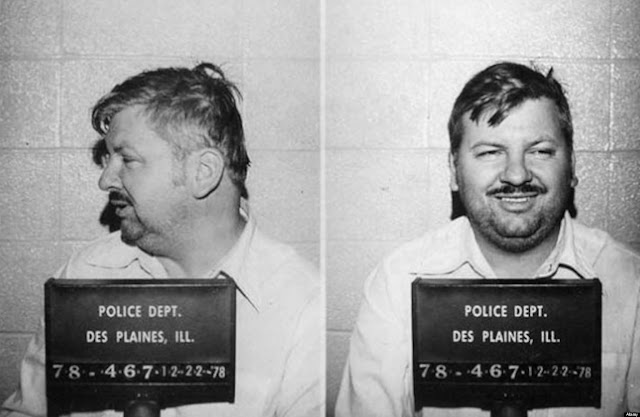 The notorious serial killer John Wayne Gacy was born on March 17, 1942, in Chicago, Illinois. The son of Danish and Polish parents, Gacy and his siblings grew up with a drunken father who would beat the children with a razor strap if they were perceived to have misbehaved; the man physically assaulted Gacy's mother as well. Gacy's sister Karen would later say that the siblings learned to toughen up against the beatings and that John would not cry. John Wayne Gacy faced an abusive childhood and conflict over his sexuality.

The boy suffered further alienation at school, unable to play with other children due to a congenital heart condition that was looked upon by his father as another failing. Gacy later realized he was attracted to men, and experienced great turmoil over his sexuality.

Gacy worked as a fast-food chain manager during the 1960s and became a self-made building contractor and Democratic precinct captain in Chicago's Norwood Park Community in the 1970s. 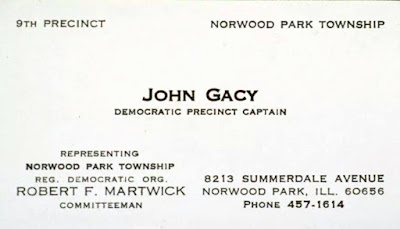 A note about the Gacy address and what community it was, and, is still in. The address was 8213 West Summerdale Avenue, Chicago, IL, until the house was razed and a new house was built on the same property with the front door moved to a different spot, making the new address a little different than the old one.
The 8213 address and the new house with the address of 8215 West Summerdale Avenue, Chicago, IL which is still located in unincorporated Norwood Park Township, and hence, in unincorporated Cook County. The Chicago street address is due to the USPS using a Chicago Zip Code. You can tell by the street sign colors what areas are unincorporated meaning that they do not have their own emergency services. Chicago street signs are Green with White letters, while unincorporated Norwood Park Township street signs are Blue with White letters.

The Cook County Assessor's Office is taxing the house across the street at 8218 West Summerdale Avenue in the Norwood Park Township as a Chicago property.

Well-liked in his community and a clown performer at children's parties, Gacy also organized cultural gatherings. He was married and divorced twice and had biological children and stepchildren.

Yet Gacy had a highly disturbing history. He was convicted in 1968 and given a 10-year prison term in relation to the sexual assault of two teen boys. He was released on parole in the summer of 1970 but was arrested the following year again after another teen accused Gacy of sexual assault; the charges were dropped when the boy didn't appear during the trial. By the middle of the decade, two more young males accused Gacy of rape, and he would be questioned by police about the disappearances of others.

It was later discovered that he had committed his first known killing in 1972, taking the life of Timothy McCoy after luring the teen to his home.

In 1978, 15-year-old Robert Piest went missing. It was reported to police that the boy had last been seen by his mother as he was headed to Gacy's in relation to a potential job. On December 21, a police search of Gacy's house at 8213 West Summerdale Avenue, Chicago, Illinois[1], uncovered evidence of his involvement in numerous horrific acts, including murder. It would later be determined that Gacy had killed 33 boys and young men, the majority of whom had been buried under his house and garage, while others would be recovered from the nearby Des Plaines River. The Des Plaines police were responsible for solving the murders.

Gacy lured his victims to his home with the promise of construction work and then captured, sexually assaulted, and eventually strangled most of them with rope. When he killed, he sometimes dressed as his alter ego, either “Pogo” or “Patches” the Clown.

Gacy's trial began on February 6, 1980, with a prosecution team headed by William Kunkle. With Gacy having confessed to the crimes, the arguments were focused on whether he could be declared insane and thus remitted to a state mental facility. Gacy had told police that the murders had been committed by an alternate personality, while mental health professionals testified for both sides about Gacy's mental state.

Ultimately found guilty of committing 33 murders after a short jury deliberation, Gacy became known as one of the most vicious serial killers in U.S. history. He was sentenced to serve 12 death sentences and 21 natural life sentences. He was imprisoned at the Menard Correctional Center for almost a decade and a half, appealing the sentence and offering contradictory statements on the murders in interviews. Though he had confessed, Gacy later denied being guilty of the charges and had a 900 number set up with a 12-minute recorded statement of his innocence. He took up visual art as well, and his paintings were shown to the public via an exhibition at a Chicago gallery.

He was found guilty in 1980 and given multiple death penalty and life sentences. With both anti-death penalty forces and those in favor of the execution making their opinions known, John Wayne Gacy died by lethal injection on May 10, 1994, at the Stateville Correctional Center in Crest Hill, Illinois.
There have been lingering concerns that Gacy may have responsible for the deaths of others whose bodies have yet to be found, with the Cook County sheriff's office pushing to search a Chicago apartment building where Gacy once worked as a maintenance employee.

The house was razed in April 1979 and a new house built in its place in 1988. It was given a new address of 8215 West Summerdale Avenue, Chicago, Illinois.
VIDEO
John Wayne Gacy - Documentary
A SERIAL KILLER

With a flick of a match, more than a dozen paintings by executed serial killer John Wayne Gacy went up in smoke Saturday evening as his victims' relatives tossed the artwork onto a bonfire.

The scene at James Quick Auctioneers near Naperville was part macabre, part cathartic, as paintings bearing such titles as "Skull Clown" and "Death Wish" were thrown into the flames about 6 p.m.

Relatives of seven of Gacy's victims were among the 100 people present. Many in the crowd cheered and chanted as the fire was lighted.

"I wish it was (Gacy), but it's a piece of him," said Milica Marino of Chicago, whose brother Michael Marino was one of Gacy's 33 known victims. "It doesn't bring my brother back... but it makes it better."

The bonfire was the brainchild of Joseph Roth, a Naperville truck parts supplier, and Walter Knoebel of Builders Concrete Co. near Naperville. The two men spent more than $10,000 on the artwork, two figurines, and other Gacy items at an auction in May.

Although the purchase drew jeers from horrified onlookers-many there to buy furniture and other unrelated estate sale objects-Roth quickly made it known they planned to burn their purchases.

The auction was held five days after Gacy was put to death at Stateville Correctional Center in Joliet. Roughly 40 paintings were up for bid that day, garnering $200 to $800 each.

Roth described the action as a quasi-public service, designed to teach children to be alert to strangers and to underscore the need for parents to keep better tabs on their young.

Kari Cohoon, whose teenage brother was killed by Gacy in 1976, called Saturday's bonfire "good therapy" for herself and other victims' relatives. Members of a dozen families had been expected to show up.

On Friday, a Will County coroner's jury ruled in a state-required inquest that Gacy died by lethal injection and that his death was a "justifiable homicide."

Originally organized in 1872 from adjacent townships (Jefferson, Leyden, and Niles) as a village, and named after Henry Ward Beecher's novel Norwood, or Village Life in New England (1868), Norwood Park was annexed to the City of Chicago in 1893. Some parts of Norwood Park are in Unincorporated Norwood Park Township, noted by the different colored street signs.
GOOGLE MAPS SEARCH: 8213 West Summerdale Avenue, Norridge, Illinois, and see for yourself.
Presented by Dr. Neil Gale, Ph.D. at 1/08/2017 09:07:00 PM