The Mystery of the Waubansee Stone of Chicago.

One of the most fascinating and obscure artifacts in North America is tucked away in a Chicago museum.
The Waubansee Stone is a huge glacial erratic granite boulder with a larger-than-life head sculpted upon its upper surface. The expertly fashioned relief carving shows the face of a man with a chin beard, depicted with his mouth open and eyes closed. On the top of the stone, just above the head, is a large drop-shaped bowl that once emptied through the head and out of the mouth, over the lower lip, to another drainage spout below the man’s goatee. There are also two connecting holes on either side of the boulder, presumably used as a line anchorage for a sea vessel.

All holes and drainage spouts are currently plugged with putty or other additions, suggesting there is no interest in a modern restoration. The mysterious face carving and associated cavities have given rise to speculation about its origins, including one theory that the stone was carved by prehistoric Mediterranean seafarers who used the 3,000-pound  boulder as a mooring stone.
Originally standing around 8 feet in height, the Waubansee Stone is mentioned in the first Fort Dearborn accounts as being located just beyond the stockade walls, along the shore of the Chicago River. Chicagoua (or Chicagou) was a local Indian word for the native garlic plant Allium Tricoccum, not an onion plant, that grew profusely along the banks of the Chicago River.

When the first fort was built in 1803, the Potawatomi Indians of southern Lake Michigan had been trading with white people for well over a century but were becoming increasingly hostile to the number of new settlers coming into the region and staking a claim on their land. President Jefferson, who was very interested in the Indiana Territory (the Indiana Territory included Illinois lands from 1800-1809), was anxious about its security.

He felt that an American military outpost should be established to protect the new frontier. He selected the mouth of the Chicago River as the site for a new fort. At that time there were several fur traders and their Indian wives living in the region. The fort was named after General Henry Dearborn, Secretary of War. It was built on the south side of the Chicago River where Michigan Avenue now crosses at Wacker Drive.

Skirmishes with the Potawatomi were on the rise, reaching a crescendo in 1812 when settlers and soldiers were massacred at the first Fort Dearborn (1803-1812) was burned to the ground by the enraged Indians.

The second Fort Dearborn was rebuilt in 1816-1817 and the Waubansee Stone was presumably reduced in size to be dragged into the fort’s parade grounds where it remained until the fort was dismantled. After that, the stone passed from collector to collector until it found a permanent home at the Fort Dearborn exhibit at the Chicago Historical Society.
Historian Henry H. Hurlbut (1813-1890) developed the generally accepted theory about the stone’s origin in 1881, unsupported by any records or documentation. His belief, admittedly based on no evidence, has the stone being carved in the early 1800s by an unnamed soldier stationed at the original Fort Dearborn. Its face was supposedly fashioned after a friendly Native American Potawatomi Chieftain named Wabansee [1], and this appointed name stuck.

Hurlbut had only hearsay on which to base his observations, including the presumption that the Indians used the upper recess as a mortar to grind their corn. This accepted explanation has come under fire from several angles. For starters, the recess was intentionally plugged after the Indians supposedly used it, so it would have been an ineffective mortar because the corn would have drained through the mouth. Also, why would a frontier soldier, who was probably suspicious of the Potawatomi in the first place, spend many months to carve the likeness of their tribal leader? Aside from the fact that granite is one of the hardest stones to sculpt, the face is clearly the work of a master stone-cutter who must have devoted a considerable amount of time and labor to the job—hardly in keeping with the strenuous daily tasks of a common frontier soldier. Finally, Native Americans were not known to have grown goatees, nor did they ever carve in granite. But if not Hurlbut’s anonymous soldier or an Indian sculptor, then who crafted the mysterious features on the Waubansee Stone?

With more source material than Hurlbut had at his disposal, yet with an uncertain date and a possible grisly usage, fragments of evidence can be pieced together using various historians to arrive near the truth.

An article in the Chicago Tribune dated September 22nd, 1903 clearly illustrates the two opposing viewpoints clashing over the stone’s origin:


“The second school of historians and antiquarians is convinced that the so-called Waubansee Stone dates back hundreds and perhaps even thousands of years before even Father Marquette first visited the site of Chicago in 1673. They see in the tall boulder, with its deeply top, a sacrificial altar on which perhaps the mound builders of prehistoric America offered even human sacrifices, and they are ready to believe that the face carved on one side of the stone is a representation of an ancient idol—one of the far off gods to whom that mythical people poured libations and offered the sacrificial blood of animals. However that may be, there is no question of doubt that in the early days of Fort Dearborn, as far back as we have any record, that identical stone, practically the same as it is today, lay near the stockade of old Fort Dearborn.”

The diffusionist theory of the Waubansee Stone describes it as a sacrificial altar for ancient Celtic and Phoenician traders in the millennium before Christ.

All historians agree that the Mississippian Culture performed animal and human sacrifices high atop their platform mounds, but where this practice originated is unknown. The Aztec or Toltec people from Mexico may have influenced them, or perhaps an earlier seafaring people notorious for infant sacrifices were responsible. It is well known that the Phoenicians (and their Celtic allies) traveled across the ocean to “the Farthest Land” known as Antilla. The precise location of Antilla was a closely guarded secret because it contained the most valuable commodity to the Bronze Age people—copper.

Michigan’s Upper Peninsula is the richest natural deposit of pure copper in the world. It may seem a long way to go for the metal, but in the Bronze Age, copper was more prized than gold or silver since it was the primary alloy used in weapon and tool production. With profit as a clear motive for their journey, it makes sense that the Phoenicians would travel very far to export copper. It also makes sense that the Phoenicians would spread their religious practices with their voyages. An integral element of the Phoenician religion was infant sacrifice to appease pagan gods and win favor for whatever activity was at hand. At the height of Phoenician power—lasting a thousand years from 1,200 BCE until the Second Punic War—babies were taken to an outdoor sacred site, called a Tophet, where a young child was placed in a carved depression on an altar and had its’ throat slit.

Both the Celts and Phoenicians were known to sacrifice infant children of their enemies or barter with their trading partners to acquire a baby for this heinous ritual. In the case of the Waubansee Stone, the sacrificial blood would flow through the sculpture into the Chicago River as an offering to the water gods, thus ensuring a safe passage. The stone’s hideous purpose is evident in the closed eyes, an unusual style elsewhere, but recurring in surviving Phoenician art used for infant sacrifices. Moreover, the face depicts a chin beard, a personal grooming style of male Phoenicians.

The mouth of the Chicago River was a necessary transition stop before entering the narrow river network leading into the Mississippi and then down to the Gulf of Mexico. Ships would need to be reconfigured from open water safety to narrow river defense. Oars and shields would replace conspicuous sails. After arriving at the mouth of the Chicago River, the ancient explorers may have settled for a brief time, sailed onward, been killed off, or possibly assimilated with the native population. There was likely a small Tophet temple at this strategic crossroad of lake and river, which thousands of years later would grow up to be the third largest city in the United States. 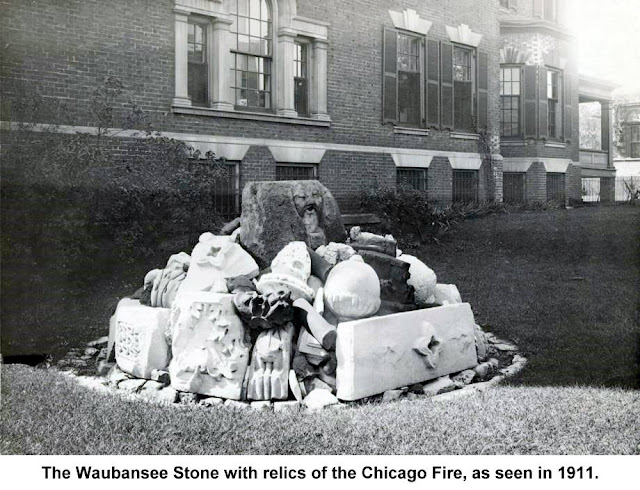 Waubansee was a chief who supported the British in the War of 1812. In 1814 he signed the Treaty of Greenville by which Potawatomi allegiance was transferred to the United States.  In a series of treaties signed by Waubansee, Potawatomi lands around Lake Michigan were sold.

In 1835 Waubansee visited Washington, D.C., to sign the treaty which sold the last of the tribal lands and to accept land west of the Mississippi River. During this visit, his portrait was painted by Charles Bird King (1785-1862). The Potawatomi Nation moved to Kansas in the 1840s and settled in what is now Waubansee County, just east of Topeka. Waubansee's portrait illustrates the Native American attraction to military costume. Coats,hats, and swords were often presented as gifts to prominent chiefs. Additionally, Waubansee wears a Presidential Peace Medal and large trade silver earrings.
Presented by Dr. Neil Gale, Ph.D. at 12/15/2016 10:36:00 PM