Rubble was all that remained of this "Class A" railroad town. It was located about a hundred yards north of 167th Street between Wolf Road (on the west) and 108th Avenue (on the east). It was located along Marley Creek and along the west side of the old Wabash, St. Louis and Pacific Railroad tracks, about 30 miles southwest of Chicago and three miles southwest of Orland Park, Illinois. 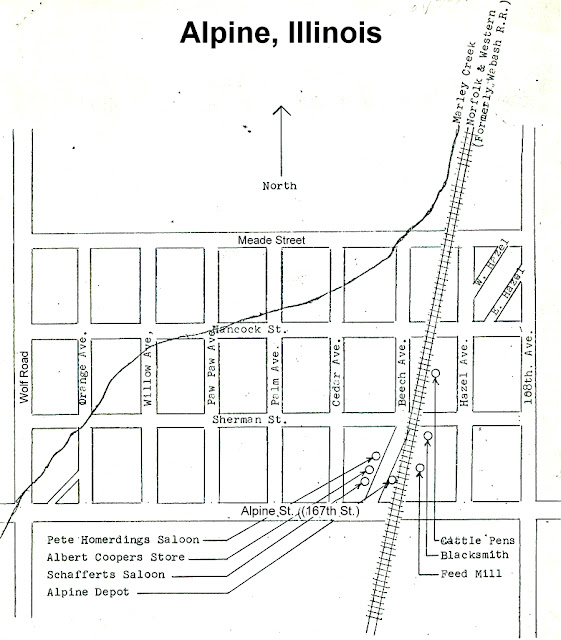 Alpine’s original history begins when it was founded as a Wabash Line Railroad station in 1891, even though the railroad was built in 1879. At that time in history, stations were established along the railroad every three miles or so. Its founding was followed by a land boom, in which many lots were sold sight unseen. The depot, which was claimed to be the “most ornate railroad depot between Chicago and St. Louis,” was a busy shipping point for local farmers and cattle raisers.

The Alpine Post Office was established May 21, 1881 with Herman R. Allen as first postmaster. So from this bit of information it appears the town may have been established earlier than 1891. That 1891 date might be a typo from my original sources of information. In any case, Alpine peaked around 1910 when it had a blacksmith shop, the Alpine Methodist Church, feed mill, Albert Cooper’s two-story general store with a dance hall in the rear, two saloons, and a railroad depot.
On the northern side of the railroad were stockyards that allowed shipment of cattle to the Chicago Union Stockyards. Excursion trains were run into town from Chicago, and life seemed grand. The main street was also lined with a wooden sidewalk. Homerding’s and Schaffert’s saloons were located conveniently across from the depot.

A telegrapher's strike began the town’s woes as the Wabash Company eliminated telegraph operators from every other station. Alpine drew the short straw and lost its operator. Orland kept its operator, and that station became the main shipping point, decreasing business to Alpine.

In November of 1911 or 1912, fire destroyed the store and two saloons, putting the town in a tailspin. Since there was no central water system, the three buildings burned to the ground. This blow seriously crippled the dreams of Alpine. Shortly after the fire, the railroad depot was no longer used. It was torn down during WWII, leaving Alpine a vacant site. Around 1941, Cook County officially announced the “disappearance” of Alpine when it was removed from the state’s sales tax list.

By the 1980s, the barren site was overgrown with weeds and any homes in the area were of much more recent vintage.

Alpine has risen. Alpine Heights is a subdivision in Unincorporated Cook County. Orland Park used the same streets and street names with a new tract of homes built over the old home-site.

Email ThisBlogThis!Share to TwitterShare to FacebookShare to Pinterest
Living History of Illinois and Chicago® IL Northeast, Lost Towns of Illinois, Maps and Plats