Abraham Lincoln, the Only U.S. President to Hold a Patent. 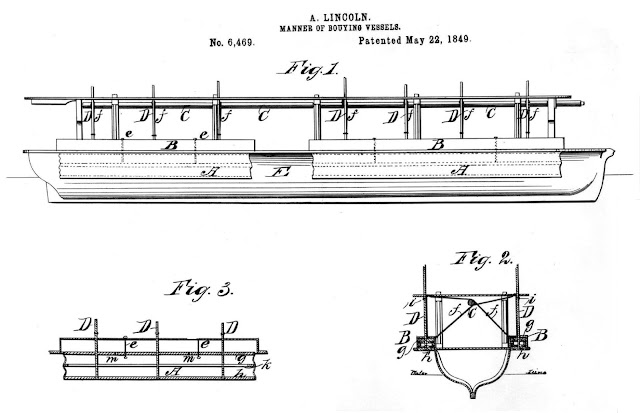 This device was composed of large bellows attached to the sides of a boat that was expandable due to air chambers. His successful patent application led to his drafting and delivering two lectures on the subject of patents while he was President. Lincoln was at times a patent attorney and was familiar with the patent application process as well as patent lawsuit proceedings. Among his notable patent law experiences was litigation over the mechanical reaper.

CLICK TO READ ─► THE ACTUAL PATENT LETTER.
The invention stemmed from Lincoln's experiences ferrying travelers and carrying freight on the Great Lakes and some Midwestern rivers. 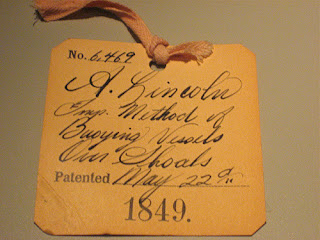 In 1860, Lincoln wrote his autobiography and recounted that while in his late teens he took a flatboat down the Ohio and Mississippi Rivers from his home in Indiana to New Orleans while employed as a hired hand. The son of the boat owner kept him company and the two went out on this new undertaking without any other helpers.

After moving to Macon County, Illinois, Lincoln made an additional trip a few years later on another flatboat that went from Beardstown, Illinois, to New Orleans. He, John D. Johnston (his stepmother's son), and John Hanks were hired as laborers by Denton Offutt to take a flatboat to New Orleans. They were to join Offutt at Springfield, Illinois. In early March 1831, the boys purchased a large canoe and traveled south on the Sangamon River. When they finally found him, they discovered Offutt had failed to secure a contract for a freight trip in Beardstown. Thus, purchasing a large canoe was an unnecessary expense. They then tried to cut their losses and worked for Offutt for twelve dollars per month cutting timber and building a boat at the Old Sangamon town (fifteen miles northwest of Springfield) on the Sangamon River. The new boat carried them to New Orleans based upon the original contract with Offutt.

As William Horman first wrote, "necessity is the mother of invention." Before Offutt's flatboat could reach the Illinois River, it got hung up on a milldam at the Old Sangamon town. As the boat was sinking, Lincoln took action, unloading some cargo to right the boat, then drilling a hole in the bow with a large auger borrowed from the local cooperage. After the water drained, he re-plugged the hole. With local help, he then portaged the empty boat over the dam and was able to complete the trip to New Orleans.

At the age of 23, Lincoln started his political career in New Salem. Near the top of his agenda was the improvement of navigation on the Sangamon River. Lincoln's law partner and biographer, William H. Herndon, also reports an additional incident at the time: a boat Lincoln was on got stranded on a shoal; the boat gradually swung clear and was dislodged after much manual exertion. This event, along with the Offutt's boat/milldam incident, prompted Lincoln to start thinking about how to lift vessels over river obstructions and shoals. He eventually came up with an idea for inflatable flotation. Patent №. 6469 was awarded to Abraham Lincoln on May 22, 1849, while still a Congressman in Illinois. Called "Buoying Vessels Over Shoals," Lincoln envisioned a system of waterproof fabric bladders that could be inflated when necessary to help ease a stuck ship over such obstacles. When crew members knew their ship was stuck, or at risk of hitting a shallow, Lincoln's invention could be activated, which would inflate the air chambers along the bottom of the watercraft to lift it above the water's surface, providing enough clearance to avoid a disaster. As part of the research process, Lincoln designed a scale model of a ship outfitted with the device. This model (built and assembled with the assistance of a Springfield, Ill., mechanic named Walter Davis) is on display at the Smithsonian Institution.

After reporting to Washington for his two-year term in Congress (beginning March 1847), Lincoln retained Zenas C. Robbins, a patent attorney. Robbins most probably had drawings done by Robert Washington Fenwick, his apprentice artist. Robbins processed the application, which became Patent №. 6469 on May 22, 1849. However, it was never produced for practical use. There are doubts as to whether it would have actually worked: It "likely would not have been practical," stated Paul Johnston, curator of maritime history at the National Museum of American History, "because you need a lot of force to get the buoyant chambers even two feet down into the water. My gut feeling is that it might have been made to work, but Lincoln's considerable talents lay elsewhere."

About that time, Lincoln took his son Robert Todd to the Old Patent Office Building model room to view the displays, sowing one of the youngster's fondest memories. Lincoln himself continued to have a special affinity for the site.

Lincoln's invention was never manufactured and experts believed it would not have worked properly.

The novel part begins by comparing the US youth at that time, which Lincoln calls “Young America” with the human beings of antiquity or “Old Fogy” represented by Adam, as the first man. According to Lincoln, the main difference between the “Young America” that had the world at its feet and the first human beings, who were at the mercy of nature, is the result of Discoveries, Inventions, and Improvements. These, in turn, are the result of observation, reflection, and experiment.”

Other Presidents have invented things too.
Thomas Jefferson was an inventor. Among Thomas Jefferson’s inventions were such devices as the macaroni machine that he invented in 1787, the swivel chair, the spherical sundial, the moldboard plow, and the cipher wheel, which was an ingenious way to allow people to code and decode messages. Jefferson’s cipher wheel was used until 1802, and then it was "reinvented" just prior to World War I and used by the US Army and other military services to send messages back and forth. Jefferson served as American minister to France in the 1780s and, as a result of his travels throughout Europe, was able to adapt some of the things he saw in Europe to benefit Americans as well.

Jefferson felt that all people should have access to new technology and, since he didn’t want others to be deprived of the benefits that new inventions bring, he never applied for a patent on any of his inventions. He considered patents to be an unfair monopoly. Several of Thomas Jefferson's inventions are still in use today; they deal mainly with agricultural and mechanical products. He also was responsible for introducing French fries into the United States.

President George Washington was also a successful inventor, and in 1772 he received a trademark for his brand of flour.

But, Abraham Lincoln is the only President to hold a patent.

Email ThisBlogThis!Share to TwitterShare to FacebookShare to Pinterest
Living History of Illinois and Chicago® Abraham Lincoln, Inventors and Inventions