The history of "Pleasant Ridge," the Kinsella's homestead and their 1854, 2-story log cabin, in Fairview Heights, Illinois.

Fairview Heights, Illinois, in the St. Louis Metropolitan area. The log cabin is the last remnants of the Kinsella Family homestead named "Pleasant Ridge." I was intrigued by the two-story log cabin and wanted to get inside to see it for myself. One of the perks of being a Historian is the ability to gain access to places not open to the public. 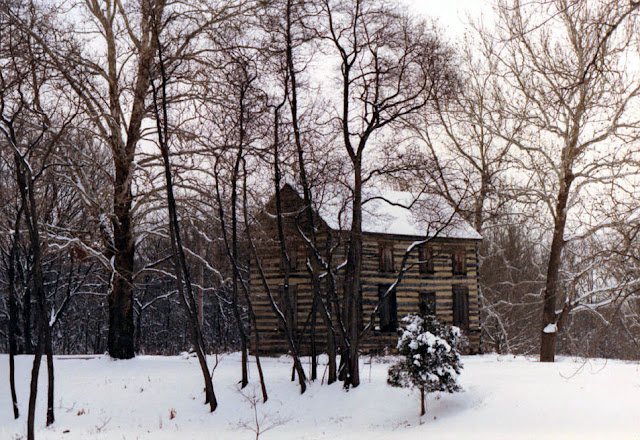 In July of 2014, I was granted access to the inside of this lovely old log cabin. The log cabin was barely wired for electricity, mostly for ceiling light. There were no lights when I shot these photos using only the natural lighting that came through the open front door.

The second level was pitch-black. I used a bounce flash on my camera and just kept shooting, even though I couldn't see a thing. The basement crawl space, entrance outside, was inaccessible as the supervisor of Fairview Heights Parks and Recreation did not have the appropriate tools to gain access at that time.

THE KINSELLA LOG CABIN HISTORY
The log cabin was built by Cornelius and Eve Rittenhouse, who owned the property until it was sole to the Kinsella's in 1880. It is a two-story structure that was built approximately 1854. The cabin is constructed of hand-hewn logs, measuring from 8 to 18 inches in diameter, chinked with wooden splints (removed from the logs during construction), and mud mixed with straw.

A brick chimney ran through the center of the home and was used for wood-burning stoves and heat on either side. The log cabin sits on its original foundation, to some extent, in the early 1900s. Lawrence Kinsella dug out a basement underneath the house and added concrete to the floors and walls.  A rear addition was added around 1920, at which time the log exterior was covered with siding. Until the 1940's the entrance to the cabin consisted of a road coming from the east and continuing down to Pleasant Ridge Road. Today, the entrance road comes in from the Southwest.

The log cabin had not been open to the public in decades.
The property was originally purchased from Cornelius and Eve Rittenhouse by William Kinsella for $200.00 ($5,440 today) on September 28, 1880. The log cabin was dedicated on September 19, 1976, to the City of Fairview Heights at Pleasant Ridge Park.

Fairview Heights purchased the land in 1973 and restored the log cabin to as close to its original state as possible in 1976. The Log cabin received a face-lift on the front portion of the cabin in 1993, where the worn wood beams were replaced with hand-hew logs to keep the integrity of the log cabin. 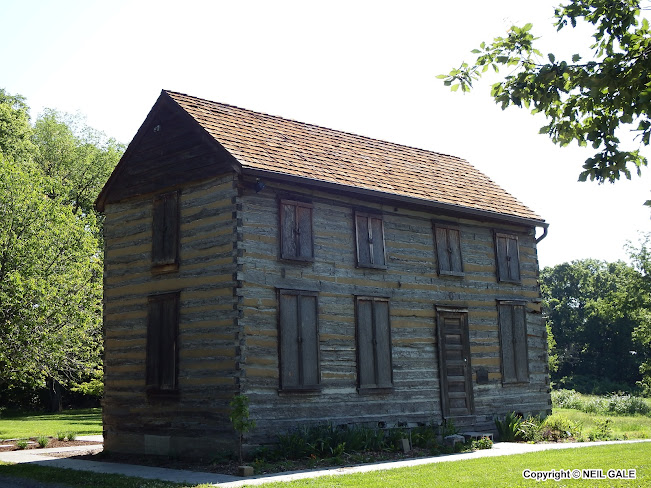 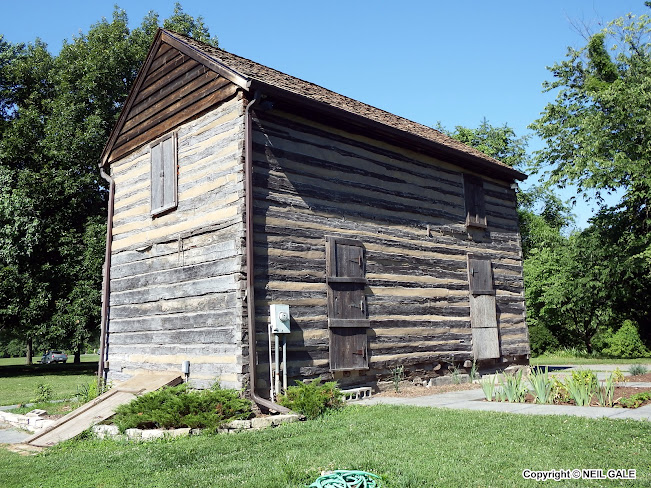 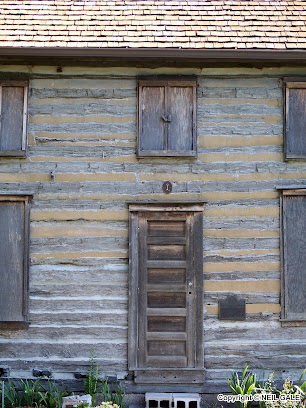 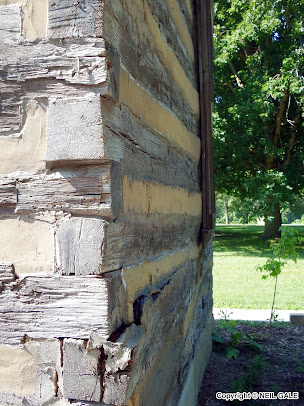 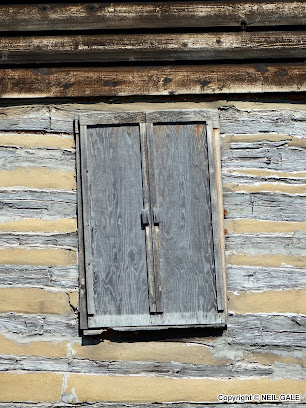 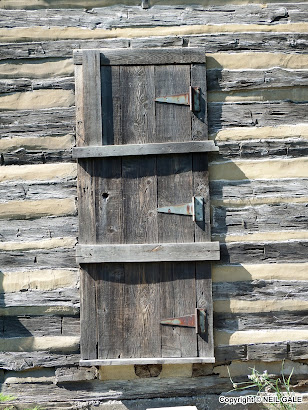 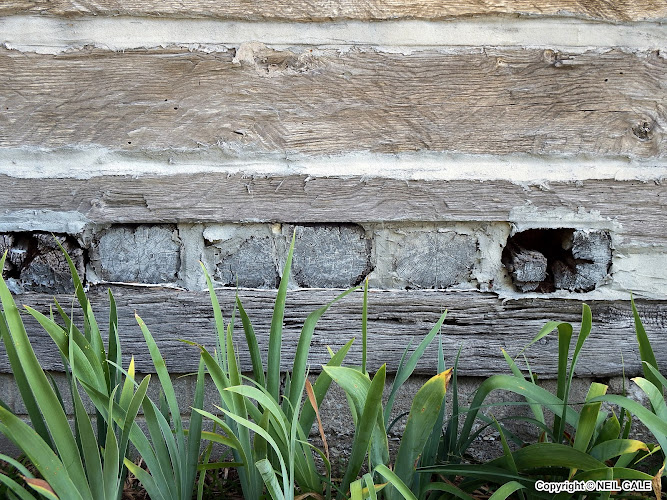 INTERIOR PHOTOGRAPHS
The cabin holds a special place with the City of Fairview Heights, Illinois, in that it is the oldest structure in a relatively modern city. Below are landmark plaques this house received. 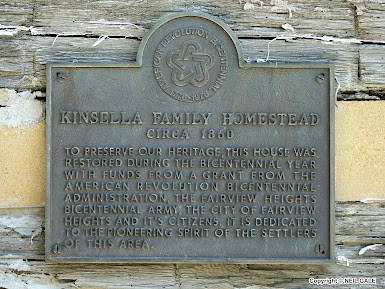 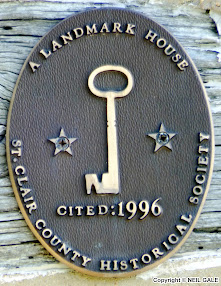 THE KINSELLA FAMILY STORY
In the 1840s, during the potato famine, William Kinsella left his home in Dublin, Ireland, and immigrated to Caseyville Township to seek his fortune. He worked as a carpenter with the B&O Railroad, building a trestle and laying ties for the new line.

He would rest at the crest of the hill overlooking the railroad during his breaks, and he eventually decided to buy the acreage and build a lean-to structure on the property. He was so impressed with the beauty of the trees, especially in the fall, that he named the area "Pleasant Ridge." He married Anna S. Connely from Wexford, Ireland, in 1850.

William Kinsella lived in Caseyville, Illinois, for a short while after immigrating from Ireland.

He and his wife (and most likely, one or two children) lived in a tent for four years while the cabin was built. Using the wood from the nearby trees, he built this two-story log cabin of hand-hewn logs. In their new home, Anna and William farmed and raised the first generation of American Kinsella's - three sons and five daughters.

The homestead was left to his youngest son, Lawrence, who married Emily R. Fournie in the early 1900s. They raised their nine children, Prosper, Tom, Stella, Gart, Joe, Mary, Cyril, James, and Bernard, in the home he built. Between 1920 and 1925, Lawrence built an extension to the log cabin and covered it with white wooden siding to preserve the logs.

After Lawrence's death, the farm was passed on to Cyril, who was married to Rita O'Brien. They continued to farm and raised their children Larry, Kenny, Dennis, and Susan in that house.

In 1960, Cyril and Rita built a brick home next to the old farmhouse. They rented the farmhouse to Gart's daughter Mary and her husband Jack Koch, where they raised their seven children, William's great-great-grandchildren, in the house that he built.

After Cyril's untimely death in 1962, the farmland was leased. In 1973 the City of Fairview Heights purchased the Pleasant Ridge farm for a nature park. As part of the Bi-Centennial Celebration in 1976, a committee was formed to restore the unique two-story log cabin to its original form. Joe Kinsella, Lawrence's son supervised the project, and Larry Kinsella, Lawrence's grandson was a carpenter for the project.