The Pledge of Allegiance was written for the Chicago World's Columbian Exposition of 1893.

The Pledge of Allegiance was written for the Chicago 1893 World's Columbian Exposition to honor the 400th Anniversary of Columbus' Landing in the Americas in 1492. 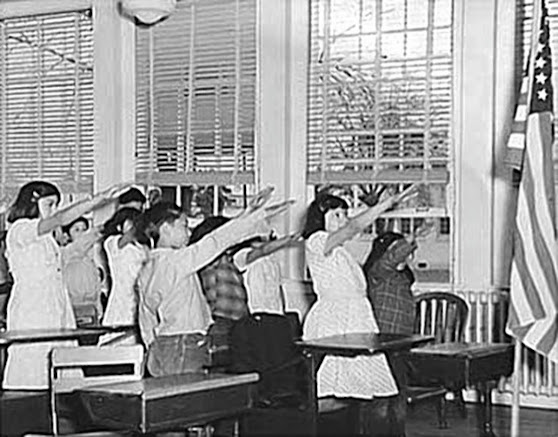 In 1891, Daniel Sharp Ford, the owner of the Youth's Companion, hired Bellamy to work with Ford's nephew James B. Upham in the magazine's premium department. In 1888, the Youth's Companion had begun a campaign to sell American flags to public schools as a premium to solicit subscriptions. For Upham and Bellamy, the flag promotion was more than merely a business move; under their influence, the Youth's Companion became a fervent supporter of the schoolhouse flag movement, which aimed to place a flag above every school in the nation. Four years later, by 1892, the magazine had sold American flags to approximately 26,000 schools. By this time the market was slowing for flags but was not yet saturated.

In 1892, Upham had the idea of using the 400th anniversary of Christopher Columbus reaching the Americas to further bolster the schoolhouse flag movement. The magazine called for a national Columbian Public School Celebration to coincide with the World's Columbian Exposition. A flag salute was to be part of the official program for the Columbus Day celebration to be held in schools all over America.

The Pledge was published in the September 8, 1892, issue of the magazine, and immediately put to use in the campaign. Bellamy went to speak to a national meeting of school superintendents to promote the celebration; the convention liked the idea and selected a committee of leading educators to implement the program, including the immediate past president of the National Education Association. Bellamy was selected as the chair. Having received the official blessing of educators, Bellamy's committee now had the task of spreading the word across the nation and of designing an official program for schools to follow on the day of the national celebration. He structured the program around a flag-raising ceremony and his pledge.

"I pledge allegiance to my Flag and to the Republic for which it stands, one nation indivisible, with liberty and justice for all."

The Pledge of Allegiance changes are in RED:

1892 to 1923 (early revision by Bellamy) — "I pledge allegiance to my Flag and to the Republic for which it stands, one nation, indivisible, with liberty and justice for all."

1923 to 1924 — "I pledge allegiance to the Flag of the United States and to the Republic for which it stands, one nation, indivisible, with liberty and justice for all."

1924 to 1954 — "I pledge allegiance to the Flag of the United States of America and to the Republic for which it stands, one nation, indivisible, with liberty and justice for all."

1954 (current version, per 4 U.S.C. §4) — "I pledge allegiance to the Flag of the United States of America, and to the Republic for which it stands, one Nation under God, indivisible, with liberty and justice for all."

By June 29, 1892, Bellamy had arranged for Congress and President Benjamin Harrison to announce a proclamation[1] making the public school flag ceremony the center of the Columbus Day celebrations (this was issued as Presidential Proclamation 335).

Subsequently, the Pledge was first used in public schools on October 12, 1892, during Columbus Day observances organized to coincide with the opening ceremony of the World's Columbian Exposition in Chicago, Illinois. The fair's construction process was slow, in fact, the enormity of the task at hand forced Daniel Burnham and the commission to push the opening day back from late 1892 to May of 1893. The commission decided to keep the 400th-anniversary date to celebrate Christopher Columbus and the upcoming World's Fair which opened May 1, 1893.

The Bureau of Education liked the idea so much they printed massive quantities of the pledge and mailed copies to virtually every school in the nation. The children and adults saying the pledge at the moment of the dedication were to show respect for the flag by giving that symbol a gesture that came to be known as the "Bellamy salute."

The gesture involved stretching the arm out toward the flag as the pledge was recited. The practice of reciting the pledge caught on quickly with educators and the public in general. Soon it was a regular part of a student's school day. It was also recited at civic ceremonies and all national celebrations. 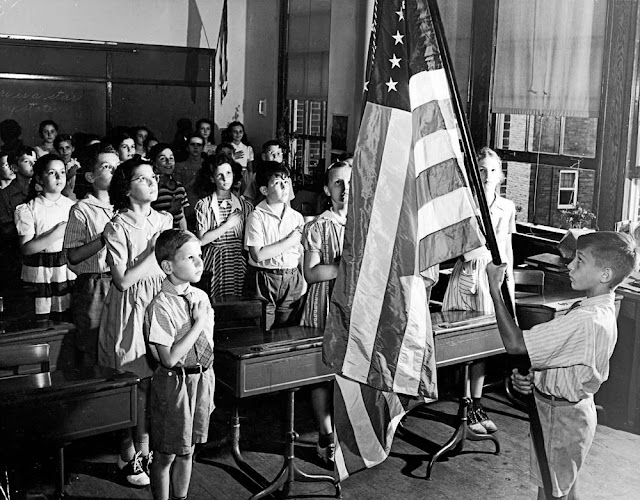 During World War II, the salute was replaced with a hand-over-heart gesture because the original form involved stretching the arm out towards the flag in a manner that resembled the later Nazi salute. The Bellamy salute was officially replaced by the hand-over-heart salute when Congress amended the Flag Code on December 22, 1942. The Pledge has been modified four times since its composition.


By the President of the United States of America
A Proclamation

Whereas by a joint resolution approved June 29, 1892, it was resolved by the Senate and House of Representatives of the United States of America in Congress assembled --

That the President of the United States be authorized and directed to issue a proclamation recommending to the people the observance in all their localities of the four hundredth anniversary of the discovery of America, on the 21st of October, 1892, by public demonstrations and by suitable exercises in their schools and other places of assembly.

Now, therefore, I, Benjamin Harrison, President of the United States of America, in pursuance of the aforesaid joint resolution, do hereby appoint Friday, October 21, 1892, the four hundredth anniversary of the discovery of America by Columbus, as a general holiday for the people of the United States. On that day let the people, so far as possible, cease from toil and devote themselves to such exercises as may best express honor to the discoverer and their appreciation of the great achievements of the four completed centuries of American life.

Columbus stood in his age as the pioneer of progress and enlightenment. The system of universal education is in our age the most prominent and salutary feature of the spirit of enlightenment, and it is peculiarly appropriate that the schools be made by the people the center of the day's demonstration. Let the national flag float over every schoolhouse in the country and the exercises be such as shall impress upon our youth the patriotic duties of American citizenship.

In the churches and in the other places of assembly of the people let there be expressions of gratitude to Divine Providence for the devout faith of the discoverer and for the divine care and guidance which has directed our history and so abundantly blessed our people.

In testimony whereof, I have hereunto set my hand and caused the Seal of the United States to be affixed.

Done at the city of Washington, this 21st day of July, A.D. 1892, and of the Independence of the United States the one hundred and seventeenth.

By the President:
BENJ. HARRISON